Winter in full swing as country gets snow, sleet and rain

Israel went into full winter mode as snow, sleet and rain hit cities in the North, South and everywhere in between on Tuesday. 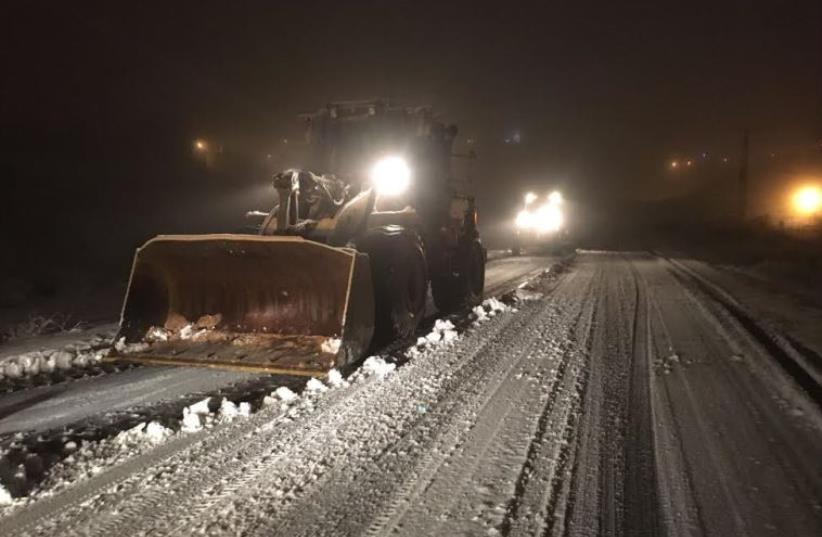 IDF clearing snow on Highway 35, January 26, 2016
(photo credit: IDF)
Advertisement
For the second consecutive day, the Israel Electric Corporation reported record-breaking winter electricity consumption, reaching 12,624 megawatts in the evening as temperatures dipped to below-freezing levels in some places around the country.Schools remained open in most communities in Israel, but the Knesset canceled all of day's meetings in light of the inclement weather predictions.As a precautionary measure in anticipation of more storms, police temporarily closed off Highway 443 in both directions from Shilet Junction to Mahane Ofer, as well as Highway 45 from Atarot Junction in the direction heading to Jerusalem and the highway leading from Ma'aleh Hahamisha to Kiryat Anavim.Despite days of preparation, a Jerusalem snowstorm still failed to materialize by Tuesday evening as the falling snow and sleet quickly melted upon reaching the ground, according to data provided by Dr. Amos Porat, head of the Climate Department at the Israel Meteorological Service. The IMS said that snow would continue to come down as the nighttime low in the capital would dip down to -2 degrees.Nearby, in Gush Etzion, 3 cm. of snow managed to pile up. Since Friday, the Judean Hill region has seen 50-80 mm. of rainfall, with some places getting 100 mm. of rain.Despite very cold temperatures in the Galilee and Upper Golan Heights, only a few centimeters of snow piled up, with the deepest amount being 5 cm., which was still enough for skiers to enjoy the slopes at Mount Hermon. As for rain, the area has had from 15 to 35 mm. of it since Friday. Around Lake Kinneret (Sea of Galilee), between 5 mm. and 15 mm. have come down. Since the beginning of the winter season, the IMS said that rainfall in the North ranged from 70 to 80 percent of the seasonal average.As of Tuesday morning, Lake Kinneret's water level stood at 212.82 meters below sea level, following a 1-cm. rise from the previous day and leaving the basin 4.02 meters from full capacity, the Water Authority said. Most of the central and southern regions of Israel did not see snow at all but instead received plenty of rain, with the IMS reporting that the southern coastal plain has been awash in 70-120 mm. of rain since Friday.The northern Negev has seen from 30 to 70 mm. of rainfall in that time. So far, the northern Negev has had rainfall that was 110-130 percent higher than the winter average.The coldest place in the South was Mitzpe Ramon, where sleet arrived in the area and temperatures dipped down to freezing levels along with wind speeds up to 50 kph.Safed retained its title as Israel's coldest locale, with a low of -3 degrees at night to accompany by light snowfall.Scattered showers graced Tel Aviv throughout the day, with the city reaching a high of 11 degrees. Since Friday, parts of the central coastal plain have received between 20 and 50 mm. of rain. The amounts so far this winter in the area have been from 110-130% higher than those during the same period last year.The Dead Sea was still the warmest place to be, with a high of 14 degrees in Ein Gedi and a nighttime low of 9 degrees. Eilat saw a similar 14-degree high but a slightly colder 7-degree low.