Working to ease the lives of foreign workers in Israel 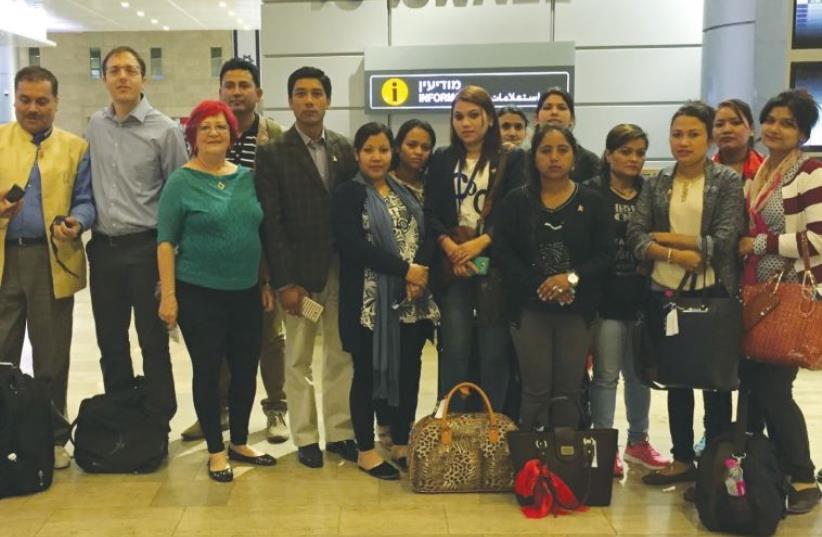 NEPALESE CAREGIVERS pose upon arrival at Ben-Gurion Airport recently.
(photo credit: CENTER FOR INTERNATIONAL MIGRATION AND INTEGRATION)
Advertisement
The life of a foreign worker, far from home and often doing difficult work, is not an easy one. One NGO is hoping to make the situation a bit easier.Speaking to The Jerusalem Post on Thursday, Arnon Mantver, who founded the Center for International Migration and Integration (CIMI) and serves as volunteer chairman, said that in the past 15 years, the number of foreign workers in Israel has grown significantly.Mantver, a former director-general of the Immigration and Absorption Ministry, said that the increased need for foreign workers began in the late 1990s and early 2000s, during the second intifada, as foreign workers were brought in to replace Palestinian laborers.With that, came a slew of issues, including human trafficking and workplace violations. As well, foreigners wanting to work here were made to pay exorbitant amounts to employment agencies that brokered their visa and employment.Mantver says the best way to combat these issues is through bilateral agreements.In an earlier statement from CIMI, the organization noted that following the 2012 Thailand Israel Cooperation agreement, fees paid to agencies dropped to $2,000. Prior to that agreement workers were being charged $10,000.A similar agreement with Moldova permitted construction workers from that country to work here without any fee. Parallel agreements are in the works with Nepal and Sri Lanka to allow caregivers from those countries to work in Israel without paying a broker’s fee.According to a CIMI spokesman, there are 77,000 legal foreign workers in Israel.The organization estimates there are 16,200 illegal foreign workers here, as well as 81,600 legal Palestinian or Jordanian workers, and 91,000 tourists who have overstayed their visa and are presumed to be working here illegally.CIMI provides a hotline in five languages where foreign employees can receive advice or file complaints regarding their contract, living conditions, or boss. Furthermore, they can get assistance in returning to their home country. Leaving Israel can be complicated by health problems or the lack of money for a ticket.The organization documents the makeup of foreign workers in Israel, noting that most are between the ages of 30 and 40, and that 69 percent are female.The 3,284 Chinese construction workers dominate that sector while 21,034 Thais work in agriculture. In home healthcare, the largest proportion of workers come from the Philippines, with 15,200 people.In one case, for example, a 59-yearold caregiver from Thailand suffered a stroke after 15 years of working in Israel.CIMI arranged that a doctor and nurse would accompany her on her flight back to Bangkok, and provided funding for continued medical treatment in Thailand.Mantver said that in the future, CIMI plans to expand its initiatives to include assistance to immigrants to Israel.