By YAAKOV KATZ, TOVAH LAZAROFF, JPOST.COM STAF
MARCH 21, 2010 03:27
qadus head wound 311
(photo credit: Courtesy of B'tselem)
Advertisement
Judea and Samaria Division commander Brig.-Gen. Nitzan Alon on Sunday told Israel Radio that while the IDF probe into the deaths of two Palestinian youths in a clash with security forces in the West Bank village of Burin was not yet complete, he was certain that live ammunition was not used.A preliminary IDF investigation suggested that UssayedQaddous, 19, and Muhammad Qaddous, 16, were seriously wounded by rubber bullets fired in an effort to disperse a crowd of stone-throwers. The 19-year-old, who was shot in the head, died from his wounds on Sunday morning, JonathanPollak, a spokesman for the Popular Struggle Coordination Committee,told The Jerusalem Post. The 16-year-old, who was shot in the chest by Israelisecurity forces, was said by a Nablus doctor to have died on Saturdaynight. Hours after the second death was announced, some 100 Palestiniansprotested near the Gush Etzion settlement of Tekoa on Sunday morning.According to military procedures, rubber bullets are only used after stungrenades and tear gas fail to disperse a crowd, Alon stressed, addingthat the preliminary investigation had ruled outthe possibility that soldiers used regular bullets.

But Pollak contended that Qaddous was indeed killed by live ammunition.“There is an entry wound and an exit wound in his torso, and no rubberbullet in the world can cause such an injury,” Pollak said. He addedthat he had a copy of an X-ray of the 19-year-old who was criticallywounded that showed that he had been shot in the head with liveammunition. B'tselem made an identical argument.A senior IDFofficer on Sunday morning also claimed that the youths would not havebeen killed if live ammunition had not been used. "Rubber bullets areused to prevent serious casualties and fatalities," the officer toldArmy Radio, adding that "only a violation of procedures would lead tosuch a deadly outcome."In the radio interview, Alon said that while the Palestinian protesters did not carry firearms, Saturday's riot was particularly violent, which is why the military commander on the scene approved the use of rubber bullets. "This is an area where there are riots on a weekly basis. Recently we managed to prevent the settlers from clashing with the Palestinians, but this week the protesters intentionally tried to escalate the violence by walking up the hill toward the Bracha settlement and its agricultural lands," Alon said. Palestinians have been holding weekly demonstrations in the villageover a water well that they claim settlers are trying to seize fortheir own use.When asked whether he feared that the recent clashes would lead to a third intifada, Alon said that while the tensions had been escalating for months, Israel and the Palestinian Authority still share a common interest to prevent an intifada. 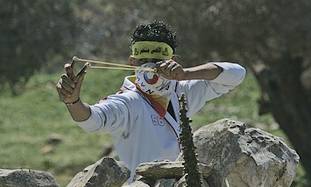 It was mainly Hamas elements who were organizing the violent incidents, sometimes with the assistance of certain Fatah members, Alon said, adding that while the situation was definitely flammable, he does not feel that the Palestinian public widely supports such an escalation. Alon explained that the PA security forces "have a positive contribution" in trying to stop the escalation in violence, but "they are not omnipotent, and do not always manage to minimize or stop riots."Meanwhile in Gaza, Hamas threatened to intensify its fighting with Israel following an IAF air strike in the Strip. "We will not stand idly by, Israel will be held responsible," senior Hamas official Ayman Taha said in an interview with Al Hayat published on Sunday.On Saturday alone, four Kassam rockets launched from the Strip hit open area in the western Negev. Noone was hurt and no damage was reported in any of the attacks.

Overnight Friday, air force fighter jets bombed targets in the southern Gaza Strip in response to the increase in Kassam rocket fire. The aircraft bombed targets near the defunct Dahiniye airstrip, reportedly wounding 12 Palestinians.The strike was the second carried out by the IAF since a worker fromThailand was killed near Ashkelon by a Kassam rocket on Thursday.Early on Friday morning, IAF jets bombed a weapons manufacturingworkshop and several tunnels under Gaza’s border with Egypt that wereused to smuggle weaponry into the Strip.AP contributed to this report.
Advertisement
Subscribe for our daily newsletter