Four days after attack, office is "still working on it."

By BEN HARTMAN
JUNE 18, 2010 02:12
Advertisement
The Tel Aviv Municipality Web site remained disabled on Thursday, four days after it suffered an attack at the hands of what is believed to be a group of Turkish hackers.The Web site is only one of hundreds of sites in Israel attacked by hackers following the May 31 IDF raid of the Gaza flotilla, which left 9 Turkish citizens dead. 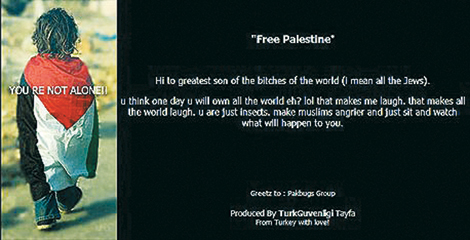 A spokeswoman for the Tel Aviv Municipality site told The Jerusalem Post on Thursday that the office “is still working on it and trying to make sure there are no additional security breaches so this won’t happen again.”The spokeswoman said that the break-in didn’t appear to be the work of amateurs.“According to what we have seen, this is clearly the work of professional hackers,” she said. “The work was very sophisticated and indicated not only that the people behind it are professionals, but also that they invested a great deal in the effort.”The spokeswoman added that she believed the site had been attacked because its address ended in “gov.il http://gov.il,” indicating that it was an Israeli government Web site. She said she believed the hackers were Turkish because of a message written across the homepage of the hacked sites that read: “HACKER BY A-G-C TURKISH ATTACKER ONE TURK AGAINST THE WORLD I F–K you mother.”The city hall spokeswoman added that in spite of the sophisticated nature of the break-in, there had been no significant damage to municipal services.Among the other Israeli sites hacked recently were government Web sites and sites for Israeli restaurants and car importers. Even a site promoting a movie on hip hop group Shabak Samekh was taken over, with a picture of a cargo ship emblazoned with a Turkish and Palestinian flag.The assault has also been reported on Facebook, where dozens of Israelis have had their personal profiles hijacked by hackers who have changed profile pictures to the Turkish flag or to messages calling for a boycott against Israel.Most of the assaults are what are known as “defacement” attacks, inwhich the content of the original site is replaced by content createdby the attacker. Such attacks are often not especially difficult torepair.Israeli hackers have managed to counter-attack, with one managing toinfiltrate the Web site of Turkish charity and Mavi Marmarasponsor IHH. The hacker, who is based out of Holon, managedto dramatically alter the content of the IHH site before crashing itsdonations link altogether for a number of hours.The crash took place while the site was reportedly taking in around €9,000 per hour.As part of the content changes, the hacker changed a photo of theMavi Marmara on the Web site to a picture of an IAFjet with the words “Yes We Can” written next to it.
Advertisement
Subscribe for our daily newsletter