The women of United Hatzalah step to the plate

With a full house to care for and a job, the ladies of the United Hatzalah Women’s Unit have a lot on their plate. But that doesn’t stop them from pushing everything aside in order to save a life 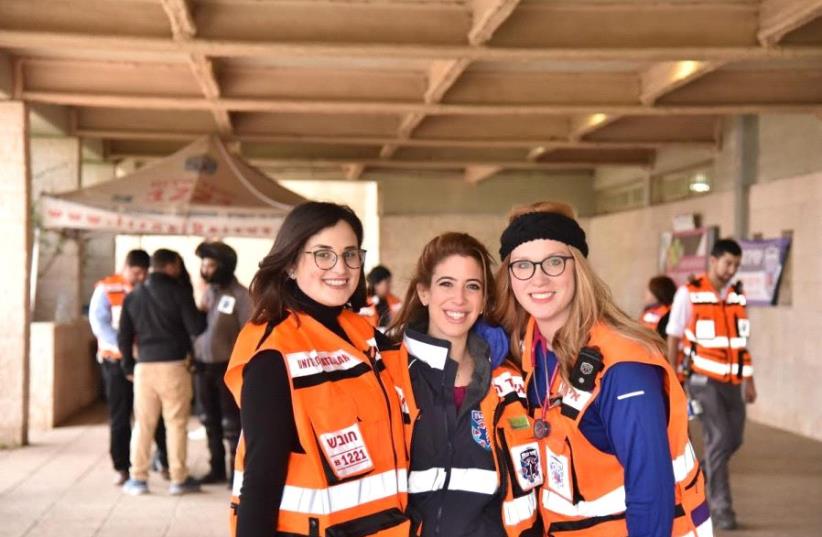 Members of the United Hatzalah Women’s Unit
(photo credit: COURTESY UNITED HATZALAH)
Advertisement
When Gitty Beer, head of the United Hatzalah Women’s Unit reveals that she was up all night, answering calls until 5 a.m., it’s hard to believe. Because for someone who is functioning on little sleep, Beer is incredibly upbeat. Every other word is “amazing” and every sentence ends with a smile. Much of this can be attributed to her naturally gregarious nature, but also to the work she does with the United Hatzalah Women’s Unit that has empowered her and the more than 100 women enrolled.They are no different from the scores of other United Hatzalah female volunteers, except for the fact that they belong to Israel’s ultra-Orthodox community.Answering calls, hopping in a car and dropping one’s responsibilities at any given moment in order to save a life may not be what the community perceives as “modest” behavior, but it does dovetail with the Jewish notions of Tikkun Olam (repairing the world) and pikuah nefesh (the importance of saving a life).So, the Women’s Division operates subtly and quietly in these communities, with the understanding that it’s done as discreetly as possible. For now, they mostly hail from Jerusalem, Ramat Beit Shemesh and Betar Illit.Rabbis in these communities have given them the green light, mostly because they fill an essential need for a community: aiding women when they are in distress.“In the religious community, with births or, God forbid, miscarriages, it’s preferable to have a woman rather than a man.When you’re giving birth, you don’t want a guy sitting there,” Beer says. “Maybe in the exact moment of treatment the women doesn’t care, but the second before and after it’s not comfortable being around a man when one is so vulnerable.”“We’re here to fill their needs,” she says, of the religious communities. “This is for them.”The idea was floating in Beer’s head for a while, but it was only late last year that the course was launched.Beer, who is married to United Hatzalah President Eli Beer, explains that the course requirements are exactly the same as the regular EMT course – volunteers take the 180 hour course and then do 100 hours of training all so they can bring United Hatzalah’s record-low response time and treatment to these women in need.“I don’t want to make a whole big thing about it,” Beer says when asked why the name of the unit doesn’t imply that it caters to the religious world. “It’s a quiet, intimate thing that we’re doing. For the religious community, it needs to be subtle.You don’t want to come in with a bunch of lights and noise.”In other words, while this may not be Wonder Woman in Mea She’arim, it is women quietly helping their own when they need it most.And in helping others, they are also helping themselves.Yaffa Goldschmidt, a mother of seven in Jerusalem’s Ramat Eshkol neighborhood, says being part of the women’s unit has enriched her both personally and professionally.“I love helping people. This is what I do for myself,” she says.The tools she learned in the course have come in handy when caring for so many children. “When you have seven kids, this is very useful. I’m no longer panicky in these emergency situations. It’s a huge plus,” she says, adding that it has also helped in her role as a fitness instructor where she has more than 100 women clients of various ages.The first course launched last December was so popular that a second will follow.Beer says she also hopes to expand the communities that are being impacted by the program, explaining there is great demand in Kiryat Sefer, Elad, Bnei Brak, Rechasim and Netivot, and she hopes to make inroads in those communities as well.It has gained popularity by small adverts published in religious newspapers, but that doesn’t seem to explain all the outpouring  calls of inquiry the Women’s Unit has received. “We get so many calls. It’s amazing. I feel it’s very special.”That’s not to say everything has been smooth sailing until this point. Many of the 100 women enrolled are not in an actual unit because they don’t drive, and as such can’t fulfill some major duties expected of a United Hatzalah volunteer.“It’s funny, they want to do something, but then there’s a conflict. It’s not easy,” Beer laments. “It’s what we want versus what exists in reality.”Because they have so many responsibilities at home: many children, a demanding job (since many men in the religious community don’t work and study in yeshiva instead), the determination among the recruits is strong.“The woman who does this clears her schedule. She is committed 100,000 percent,” Beer says. “She did a lot of thinking before she came here.”Beer understands that this organization can be interpreted in a myriad of ways when it comes to feminism and female empowerment, but she is quick to emphasize that the women enrolled in the course have full lives and being part of this unit gives them what any other United Hatzalah volunteer gets: the joy of saving a life.“The women that we took are very religious, they’re not looking for an outlet. I don’t feel like they are miskenot [pitiful women], absolutely not. They just enjoy this subject very much. I feel that they are very content with their life,” Beer asserts.“They are helping people in their own way,” she says. “And the best feeling in the world is helping someone.” This article was written in cooperation with United Hatzalah.