It's been 20 years since one of Disney's most beloved films was released, but few people know that villain Scar's song "Be Prepared" was inspired by Hitler.

By JPOST.COM STAFF
Scene from 'Triumph of the Will', 1935
(photo credit: screenshot)
Advertisement
This year marks the 20th anniversary of one of Disney's most successful animated films, The Lion King, and while the classic is beloved by many, few know that a musical sequence from the movie was inspired by Nazi propaganda.The song "Be Prepared," in which evil lion Scar sings about his plan to murder his brother Mufasa, features goose-stepping hyenas in a formation reminiscent of a Nuremberg rally. The scene in question can be viewed at minute 2:20 of the video.In fact, much of the scene was inspired by a 1935 Nazi propaganda film called Triumph of the Will, which documents 1934 Nazi Germany.The animation for the scene "grew out of one sketch by story staffer Jorgen Klubien that pictured Scar as Hitler. The directors ran with the concept and worked up a Triumph of the Will-style mock-Nuremberg rally," the film's production designer Chris Sanders was quoted by Entertainment Weekly as saying in 1994. 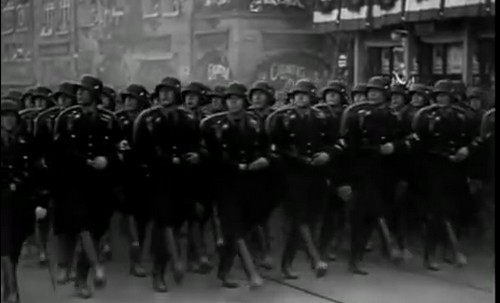 Scene from "Triumph of the Will", 1935
The movie's darker scenes and adult themes of death, betrayal and rebirth didn't keep the families away. however.The Lion King was a box-office hit when it was released in 1994, and became the highest-grossing animated film in history at the time. It has since been surpassed by Disney's Toy Story 3 and Frozen, but remains the number one traditionally animated film of all time.