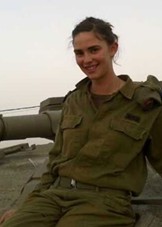 Esther Petrack (IDF SpokesmanCalling Private Benjamin! In news that evokes the classic Goldie Hawn film about a Jewish American Princess enlisting in the armed forces, former America's Next Top Model contestant Esther Petrack is training to be an IDF tank instructor. As regular Schmooze readers may remember, Petrack caused a scandal in the Modern Orthodox community after she appeared to have told ANTM host Tyra Banks that she would break the Sabbath to appear on the show. Petrack, however, told The Jerusalem Post at the time that the segment was heavily edited from a long conversation in which she explained what she can and cannot do religiously. Now, the aspiring model is a private in the IDF Armored Corps and says that her fellow soldiers are nicer than the girls on reality TV. 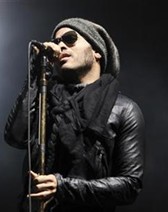 Lenny Kravitz (Reuters)The media has been so excited about Madonna's upcoming two concerts in Israel, that many sources missed another big piece of music news: Lenny Kravitz also plans to perform here. In an interview with Israeli news site Walla, the rock star, who is currently appearing as stylist Cinna in The Hunger Games, said he plans to have his first-ever concert in Israel this year. Kravitz, whose mother is The Jeffersons actress Roxie Roker and father is former NBC News producer Sy Kravitz, has yet to announce the date, but it will presumably be a part of his 2012 tour in support of his most recent album, "Black and White America."Another musician is coming to Israel, but you probably haven't heard of him if you weren't a preteen girl in the year 2000. That would be Howie Dorough, the "quiet one" in the Backstreet Boys. Dorough, who goes by Howie D, is going on a tour through Israel that will include the Western Wall, the Golan Heights, Masada and other sites. If you want to see Israel with a Backstreet Boy, it'll cost you a pretty penny: $3,995. You can see Howie D for free on YouTube.Some stars appeal to an older demographic than Howie D's fans – like actor Omar Sharif. The screen legend, who hails from Egypt, starred in such classics as Lawrence of Arabia, Doctor Zhivago and Funny Girl. Now, his grandson, Omar Sharif Jr. has made a name for himself in a different way. The younger Sharif, also an actor, came out of the closet as both gay and Jewish (his mother is Jewish) in an article in the latest issue of The Advocate, writing about his concern for other people in Egypt, during the last year's upheaval. "I want to have a place in the new Egypt," he explained. "I write asking for my inclusion."Jewish punk-pop band The Groggers got a bit more attention than they're used to last week, when the American Society of Plastic Surgeons decided to investigate their latest music video, "Jewcan Sam (A Nose Job Love Story)." Miami plastic surgeon Dr. Michael Salzhauer, who calls himself Dr. Schnoz, gave Groggers lead singer L.E. Doug Staiman a free nose job, in exchange for the band writing a song about rhinoplasty and featuring Salzhauer in their video. Then, Salzhauer encourage viewers to make their own version of the music video, and the producer of the clip with the most hits would get a free trip to Miami and a nose job. Salzhauer said he hopes his unusual advertising campaign will double his nose jobs from 250 to 500 per year, because rhinoplasty is his favorite procedure.The Weekly Schmooze collects the hottest Jewish culture news from around the world. Ranging from celebrities to philanthropy to quirky communities, we're here to schmooze about Jews. If you have any news to share with The Weekly Schmooze, write to: [email protected]