The Weekly Schmooze: Matza in the house 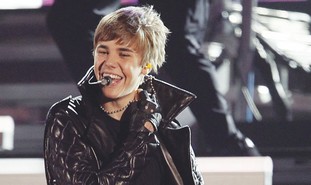 Teenagers of Israel, it's time to let out a collective shriek: Justin Bieber is here! Yes, he of the swishy bangs is performing in Tel Aviv's HaYarkon Park on Thursday night, after spending four days in the Holy Land. Screaming girls mobbed his Tel Aviv hotel upon his arrival on Monday, and stalked him throughout his trip to the Galilee and Jerusalem. If you're more a fan of indie music than pop, the Schmooze recommends checking out this music video from The Goldberg Sisters, a musical project from actor\filmmaker Adam Goldberg, best known for portraying the title character in what may be the only Jewsploitation film ever made – The Hebrew Hammer. He's also unusual in that he is one of the few Hollywood actors whose band is actually good. In hip-hop news, the original Jewish rappers The Beastie Boys are promoting a new album, Hot Sauce Committee, Part Two, and with it comes a short film called Fight For Your Right – Revisited. The film stars Elijah Wood, Danny McBride, and Seth Rogen as the Beastie Boys, and Jack Black, Will Ferrel, and John C. Reilly as the hip-hop trio's futuristic doppelgangers. It includes some Bill and Ted's Excellent Adventure references, and too many celebrity cameos to count, including Susan Sarandon, Stanley Tucci, Will Arnett, Rashida Jones, Orlando Bloom, Chloe Sevigny, and more. Here's the trailer:Passover is almost here, and with it come holiday-themed viral videos!  We all know that Moses was a bit of a Luddite, using his staff to perform most of his miracles, but how would the story of Exodus have played out if he'd had Skype, Gmail, Amazon and Google Maps? Aish HaTorah has the answer:For all the sinners out there, we have Kol Ish's "I Just Had Chametz," a Pessah-themed parody of "I Just Had Sex," by SNL's two-thirds Jewish comedy group The Lonely Island. The song has lyrics that are almost identical to the original's, strategically replacing the word "sex" with "chametz" throughout, and is almost as controversial as University of Maryland Hillel's "I Just Broke Shomer." What can I say; Orthodox kids know how to party!Finally, we have a little something for the kids. Just when you thought Jake Gyllenhaal couldn't get any cuter, he had to go and make an adorable video about the Afikomen for Shalom Sesame:Shalom Sesame took the cuteness one step further, parodying Broadway's Les Miserables with a new song called "Matza in the House:"Tune in next week – same time, same place, for more Passover videos!The Weekly Schmooze collects the hottest Jewish culture news from around the world. Ranging from celebrities to philanthropy to quirky communities, we're here to schmooze about Jews.If you have any news to share with The Weekly Schmooze, write to:[email protected]