The Weekly Schmooze: The Dude abides!

By LAHAV HARKOV
weekly schmooze 311
(photo credit: Courtesy)
Advertisement
Israel is going Coen-Brothers-crazy, with events celebrating the Oscar-winning filmmakers' work. On Monday, Joel and Ethan Coen were recipients of the Dan David Foundations' "Present" award for "cinema and society." The brothers participated in a panel discussion of their films and answered audience questions at Tel Aviv University. If you missed the lecture, have no fear! Lebowski Fest is coming to Israel. A celebration of the Coen brothers' 1998 cult classic The Big Lebowski will be held at a Jerusalem bowling alley (of course) on June 16, where fans of The Dude  can compete in costume and trivia contests, listen to a Creedence Clearwater Revival cover band, and watch a screening of the film while drinking White Russians. Reservations can be made at [email protected]. Of course, the festival is on a Thursday, not a Saturday, because Walter Sobchak is Shomer F***ing Shabbos. The Dude abides!As faithful readers know, the Schmooze's favorite Jewish celebrity couple is Ivanka 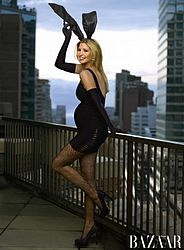 Trump and Jared Kushner, who got hitched last year after Ivanka converted to Judaism. Schmooze fans also know that Ivanka is pregnant. Well, here are some more details for you: J-vanka is expecting a baby girl on July 14! Ivanka told the news to Harper's Bazaar, saying "we have our work cut out for us to ensure that our daughter is grounded and not spoiled." The real-estate heiress and "Celebrity Apprentice" hostess posed in the fashion magazine wearing a tiny black dress, fishnets and bunny ears, showing that she's maintained her model's figure, except for a tiny baby bump.In February, the Schmooze reported that Israel is the country best-prepared to face the Zombie Apocalypse. At least that's what Mel Brooks' son Max Brooks wrote in his book World War Z, which is being made into a film starring Brad Pitt and directed by Marc Forster, set for a 2014 release. Months ago, agents searched for the perfect piece of Israeli eye candy to cast as a woman who testifies to the UN about her country's successful zombie-fighting tactics. Fast Five star and former Miss Israel Gal Gadot was rumored to be the frontrunner for the part, but this week it was announced that Israeli model Mali Levi was cast. Levi previously acted in popular Israeli soap "Our Song," and plays the Pam Beesly role in Israel's version of "The Office." She's also married to former footballer Shimon Gershon and was voted one of the 100 WAGs (wives and girlfriends of soccer players) by British lad mag Nuts in 2008. On top of that glowing résumé, Levi has also fought the undead before, using her excellent dance skills, as witnessed by this Israeli pop music video:If you're searching for a gift for the balding Jewish man in your life, look no further than the Hairmulka: A kippa and a toupee in one! Available on Etsy, it only costs $5 in the US and comes in lots of colors. Check it out: 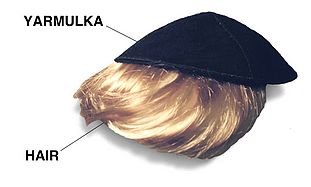 Felafel wars have hit the streets of Brooklyn. In what some call a micro-version of the Israeli-Palestinian conflict, the Taim Mobile (rated New York's best food truck by New York Magazine) has parked itself not far from Williamsburg's Oasis restaurant. Taim is owned by Israelis, including chef Einat Admony of the acclaimed Manhattan restaurant Balaboosta, while Oasis is owned by Palestinians. Although Oasis proprietor Ihab Jibril told The Brooklyn Paper that he feels threatened by Taim, he sells five times as many felafel sandwiches per day, selling them at less than half of the Israelis' price. Both Taim and Oasis should watch their backs, though, since Dawn and Dan Walker created the world's largest felafel ball in California last week, at 52.8 pounds and over a foot high.On the West Coast, a Jewish candidate for Congress in California's 36th district is making waves with his original YouTube campaign videos, featuring the slogan "Dan Adler is a mensch." Adler's campaign interviewed people in his Los Angeles-area district, which includes the never-boring Venice Beach, and asked them if they knew what a mensch is.The Weekly Schmooze collects the hottest Jewish culture news from around the world. Ranging from celebrities to philanthropy to quirky communities, we're here to schmooze about Jews.If you have any news to share with The Weekly Schmooze, write to: [email protected]
Advertisement
Subscribe for our daily newsletter