The world's most influential Jews: 21-30

By JERUSALEM POST STAFF
Shimon Peres 311
(photo credit: Marc Israel Sellem/The Jerusalem Post)
Advertisement
21. ALEXANDER MASHKEVITCH
Euro-Asian Jewish Congress president Coming soon to a television near you: Jewish Al Jazeera. What that means exactly is still a mystery, but the Kyrgyzstan-born Kazakh-stani Jewish billionaire Alexander Mashkevitch says we’re about to find out. His people are said to be working tirelessly to put together a proposal for a global news television station with a pro-Israel agenda that is slated to be announced in September.“It’s not a new project, we've discussed it for 10 years,” Mashkevitch told The Jerusalem Post in April.“Everybody understands in Israel and the Jewish world today that there is a war not by weapons and military troops, but of information.”Mashkevitch, 57, isn’t your run-of-the- mill “oligarch,” the term used for businessman from the former Soviet Union who grew fabulously rich after the disintegration of the Soviet empire, many of whom are Jewish.With a fortune estimated at $3.4 billion by Forbes, he is richer, more powerful and more colorful than most others. As the head of the Euro-Asian Jewish Congress, he has put his money where his mouth is, giving generously to Jewish and Israeli causes.Mashkevitch has proven an invaluable friend of Israel and strong supporter of Jewish communities throughout the former Soviet Union.
22. SHIMON PERES
President of the state To discover why President Shimon Peres, who will be 88 in August, is still important, one only has to surf the Internet to see how many foreign media outlets are publishing material about him. Journalists who regularly cover events at Beit Hanassi often have to wait, because an interview that the president is giving to a foreign journalist or television crew that came to Israel especially for this purpose, is going on longer than scheduled as his interviewers continue to ply him with questions.Peres is regarded far and wide as Israel’s elder statesman and former prime minister, foreign minister and defense minister. He has held all these positions and more, and many of his visits abroad are at the behest of the prime minister or the foreign minister. At the beginning of this month, he flew to Italy to represent Israel at the 150th anniversary celebrations of the Italian Republic. There were some 80 other heads of state in attendance, and Peres did a lot of lobbying for Israel in connection with the fateful meeting in September of the United Nations General Assembly; and of course he again stressed the dangers of allowing Iran to continue with its nuclear program.Jewish tradition says that no prophet is heard in his own city. Many Israelis think that Peres is passé. That opinion is obviously not shared abroad, judging by the number of invitations he receives to pay a state visit, or the requests he receives from people who want to meet him when they come to Israel. He should not be underrated on the home front because he is one of Israel’s best and most effective exports.
23. GABRIELLE GIFFORDS
US Democratic Congresswoman Gabrielle Giffords, a representative from Arizona, was hardly a household name in America before January 8 this year. Though she was a rising star in the Democratic Party as a telegenic, hardworking moderate, she became an overnight celebrity when an apparently crazed gunman shot her as she was holding an outdoor meetand- greet with citizens in her district.Though several bystanders were killed, Giffords, who turns 41 on June 8, miraculously pulled through.That day, as a survivor and victim of politically motivated violence, Giffords became a symbol for both the need for a more civil discourse in America as well as the amazing ability of humans to rehabilitate from devastating events with the help of skilled doctors and dogged determination.At first there were suggestions that she had been targeted in part because she is Jewish. Though the notion that it was an anti-Semitic attack was later revised, the story of her Jewish awakening after a trip to Israel became a showcase for the connection American Jews feel with Israel.Giffords’s prognosis is promising considering that she suffered a bullet wound to the head, which is almost always fatal. Her Congressional future is less certain. However, it is clear that her symbolic position as a fighter and uniter – two key political tropes in 2011 America – will long endure.
24. NATAN SHARANSKY
Jewish Agency chairman 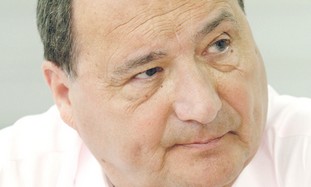 Abe FoxmanAs national director of the Anti-Defamation League since 1987, Abraham Foxman is at the forefront of combating anti-Semitism and other forms of bigotry. The ADL is famous internationally for its efforts.Whenever Jews or the Jewish state are in the line of fire, Foxman’s voice can be heard. In the past few months alone, he has spoken out against actor Charlie Sheen’s anti-Semitic comments and the University of Johannesburg’s decision to cut ties with Ben-Gurion University of the Negev, and called for European countries to be more vigilant in enforcing sanctions against Iran and for Facebook to take down a page calling for a third intifada.Foxman’s personal history adds relevance to the ADL’s battle against Holocaust denial. He was born in 1940 in Poland and hidden from the Nazis by his non-Jewish nanny. Foxman was reunited with his parents after the war and moved to the US in 1950.