Weekly Schmooze: Someone has a crush on Tzipi Hotovely

By LAHAV HARKOV
weekly schmooze 311
(photo credit: Courtesy)
Advertisement
The Academy Awards lost and gained some Jewish stars this week, after director Brett Ratner was fired from the coveted job of producing the awards ceremony over a gay slur in an interview with Howard Stern. Soon after, Eddie Murphy, the star of Ratner's Tower Heist, dropped out of the show, and Billy Crystal tweeted that he'd be taking Murphy's place. This will be Crystal's ninth time as an Oscars host, and some of his old shticks – including splicing himself into nominated movies and performing a song and dance about the nominees – have become traditions repeated by many other hosts. Here's one of his funnier Academy Awards routines, in which he claims to read stars' minds:In a new take on Jew vs. Jew, comedians Sacha Baron Cohen and Jonah Hill are now competing for a role in Quentin Tarantino’s upcoming spaghetti western Django Unchained. Whoever wins – and apparently Cohen is in the lead – will be part of a cast that includes stars like Leonardo DiCaprio, Christoph Waltz, Kurt Russell, Samuel L. Jackson and Jamie Foxx.Sarah Silverman fans will be pleased to know that they can watch her discuss “Jewy-ness” for a whole hour at Boston University. The comedienne and her sister, Rabbi Susan Silverman hosted Sister Talk at the university’s Elie Wiesel Center for Judaic Studies this week.In unusual Hollywood news – an attractive Jewish actress is seriously dating an attractive Jewish actor. Yes, Scarlett Johansson has decided to buck the dating-a-sheigitz trend, and is moving in with Joseph Gordon-Levitt of Inception and 500 Days of Summer fame – unless you were a kid in the 90s, and then he'll always be the guy from Third Rock from the Sun. Johansson divorced actor Ryan Reynolds in December 2010, after two years of marriage.Scarlett Johansson and Natalie Portman are two beautiful famous Jewish women 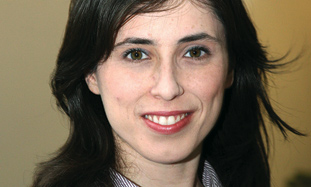 in this week's Schmooze. Likud MK Tzipi Hotovely might be surprised that she'd be included on this list. Not that she isn't pretty – she just usually gets into the press for right-wing legislation and statements. Someone at Complex Magazine, however, seems to have a crush on Hotovely, and decided that she deserves the 24th spot on its "50 Hottest Women in Politics" list. Hotovely, 32, is the only Israeli on the list. Clearly Complex didn't notice Anastasia Michaeli and Orly Levy, the two former models and Israel Beiteinu MKs. 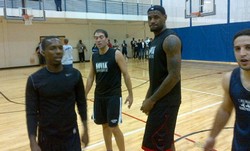 Back in the states, the NBA still isn't playing, and Lebron James decided to shoot some hoops at a Jewish Community Center in Cleveland. Apparently, James is part of a Nike campaign titled "Basketball Never Stops," in which he and others are filmed playing basketball in random places around the world – like the JCC, apparently.Steven Spielberg's The Legend of Tintin is set to be an international hit, but someone in Lebanon is trying to hide the producer's connection to the film. According to The Washington Post, the famous director-producer's name was censored in posters for the kid-friendly movie. The government blamed the owner of the movie theater, who blamed the government. Either way, it's apparently okay for the people of Lebanon to watch Spielberg's movies, as long as they don't know that a Jew made them.Speaking of anti-Semitism, any Jewish Trekkie can tell you that one of the most disturbing Star Trek moments is seeing Captain Kirk and Mr. Spock, played by Jewish actors William Shatner and Leonard Nimoy, in Nazi uniform in the episode February, 1968 Patterns of Force. The two visit a planet called Ekos, in which everyone is dressed up like Nazis, and their leader wants to destroy the "inferior race" on the planet Zeon. Kirk and Spock go undercover, in an attempt to stop the neo-fuhrer. For almost 44 years, the episode was banned in Germany, but earlier this month, it was finally aired on regular television.The Weekly Schmooze collects the hottest Jewish culture news from around the world. Ranging from celebrities to philanthropy to quirky communities, we're here to schmooze about Jews.  If you have any news to share with The Weekly Schmooze, write to: [email protected].