Not that you would have had to watch all 10 episodes to reach this conclusion. The trailer preceding the series pretty much said it all. 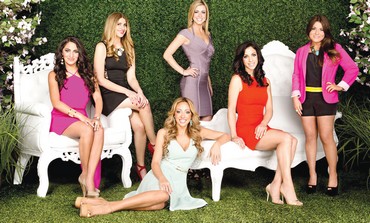 HOLLYWOOD, Fla.— The debut season of Bravo’s reality show Princesses: Long Island has finally come to a close and I think it’s pretty safe to declare it a disappointment.Not that you would have had to watch all 10 episodes to reach this conclusion. The trailer preceding the series pretty much said it all.“Oh no!” every Jew who bore witness to this short horror film surely said aloud, the color draining from their faces. Who was this crew of materialistic, entitled, daddy-dependent, marriage-obsessed 20-somethings singing “Hava Nagila” and saying things like “Shabbat Shalom, go f*** yourself”? Were they really willing to sell our people down the river in exchange for their 15 minutes?After an episode or two it was clear, though, that the problem with the show did not simply lie in its egregious Bad For The Jews-ness. Another big crime was that in devoting an entire series to Jewish American Princesses, Bravo somehow failed to do justice to Jewish American Princesses.As Chanel, the show’s least terrible princess, might say in one of her rabbinical-sounding voice-overs, “An old Jewish proverb says that stereotypes are usually somewhat based in reality.”In other words, let’s be honest here: JAPs do exist. And while of course it was initially horrifying to think that our fellow Americans might see this show and assume it is illegal for Jewish women to leave the house without a Louis Vuitton bag, Bravo had already put this thing out there. And once it was out there, would it be so terrible to admit that deep down, a teeny, tiny part of me was sort of excited to spend Sunday night watching the exploits of the FroYo-eating, bagel-scooping, elliptical-addicted, parent-sponsored Murray Hill high-rise apartment-dwelling sorority girls turned event planners I went to college with? That, to me, sounded quite compelling.At first, some Jewish viewers may have recognized glimmers of the more privileged and materialistic among us in Ashlee or Erica or Casey. But ultimately that fizzled. It wasn’t that we don’t know a few real-life princesses who go shopping with their dad’s credit cards. And yes, likely there are Jewish women out there who might label a perfectly fine neighborhood a “ghetto” upon seeing a sofa curbside awaiting bulk pickup. There are also probably a few with no real career goals who are camped out in their parents’ homes waiting for the three-carat rocks they know they deserve.Ultimately, though, this is a reality show, which means the characters are the opposite of real. They are required to be over the top to the point of being cartoonish. Any of Bravo’s princesses could have been pulled from any of the other shows about women who seem to do nothing besides shop, drink, say ridiculous, scripted things during confessional interviews and get into producer-manufactured fights with one another at parties they’ve planned to launch their latest projects. Nobody does these things in real life.And you know what nobody else does? Nobody drinks Manischewitz for fun or says “Shabbat shalom” and “mazel tov” so often and so inappropriately it seems like a tic. But that’s what happens when the singular thing that separates a show from “The Real Housewives” franchise is its Jewish angle.There were the rare instances when the Jewish moments felt authentic, like at the wedding of Chanel’s sister, for example. But the other attempts (usually by Chanel) to bring in some Judaism — be it at a Shabbat dinner in the Hamptons or at her tashlich ceremony — were cringe-worthy and inaccurate.“Princesses: Long Island” is, of course, not a documentary. So perhaps it’s unfair to expect even the slightest genuine, non-maudlin glimpse of what it’s like to grow up a privileged Jew in America.For that, it seems, we must turn to other television characters, such as Schmidt, Max Greenfield’s Jewish American Prince on “New Girl”; Zosia Mamet as a Camp Ramah alumna on “Girls”; and most recently Jason Biggs as Larry, a New York Jew coddled by his overbearing parents on “Orange Is the New Black.” These characters have probably been criticized by some for perpetuating Jewish stereotypes on some level, and they probably do.But as a great Jewish sage (or wait, maybe it was Homer Simpson) once said, sometimes something is funny because it’s true. At least a little.Jana Banin is a regular contributor to JTA’s Jewish entertainment blog 6nobacon.com, where she served as official “Princesses: Long Island” recapper.