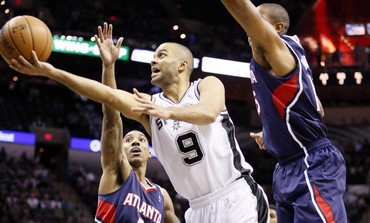 Basketball star Tony Parker is the latest high-profile French athlete to come under fire for making a controversial gesture interpreted by some as anti-Semitic.According to Fox News, the Simon Wiesenthal Center is demanding on Monday that Parker, the star point guard for the NBA's San Antonio Spurs, apologize for making the "quenelle," a hand gesture which is considered the Nazi sign in reverse.The gesture was made famous in France by controversial comedian Dieudonné, whom French authorities are considering banning due to what they say are his repeated insults of the memory of the Holocaust. A picture of the comedian and Parker doing the quenelle has been circulating on social media.
“It’s the Nazi salute in reverse,” Roger Cukierman, the leader of an umbrella group of French Jewish organizations, told Reuters.Rabbi Abraham Cooper, associate dean of the Simon Wiesenthal Center, said Sunday that Parker should “apologize for his use of the quenelle ‘Nazi’ salute.”“As a leading sports figure on both sides of the Atlantic, Parker has a special moral obligation to disassociate himself from a gesture that the government of France has identified as anti-Semitic,” Cooper is quoted as telling The Algemeiner.

Dieudonne, who has also repeatedly been fined for hate speech, ran in the 2009 European Parliament elections at the head of an "Anti-Zionist List," including far-right activists.Two days earlier, another Dieudonne associate, French soccer star Nicolas Anelka made the same gesture during the English Premier League match between his team, West Bromwich Albion, and West Ham. The governing body of English soccer said it will investigate.A spokesman for the Football Association said his organization would be launching a probe after Anelka's actions provoked widespread criticism.The former France striker marked the first of his two goals against West Ham with an apparent "quenelle" hand signal."Anelka's gesture is a shocking provocation, disgusting," said French Sports Minister Valerie Fourneyron on his Twitter feed. "There's no place for anti-Semitism on the football field."
Advertisement
Subscribe for our daily newsletter