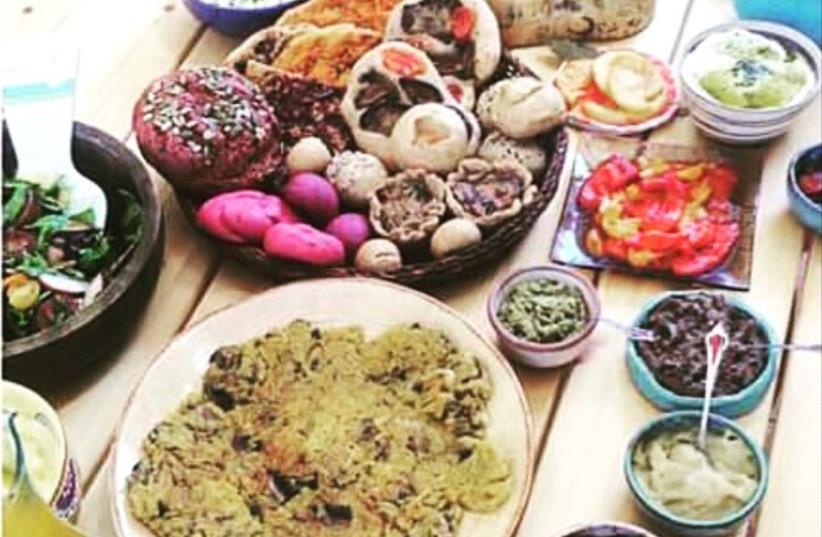 Israeli vegan food
(photo credit: MICHAELA BANK TWEETO)
Advertisement
The vegan food market is currently estimated at $15.1 billion and is expected to grow to $20b. in the next three years, Rabbi Asa Keisar says on the website Vegan Kosher, a new site devoted to promoting his views on the issue.Keisar will offer companies a vegan kosher certificate starting this week, ensuring products are both free from animal exploitation and produced according to Jewish law.“I visited a chicken farm up North,” Keisar told The Jerusalem Post, “and over there they throw thousands of male chicks to be shredded alive every day,” since male chickens don’t produce eggs. “The machinery used to destroy the chicks is facing a synagogue,” he continued. “There was a man who opened it for prayer service and I asked him: ‘Do you know what this machine is for?’ The man told me: ‘This is people’s livelihood; I ask you to drop this subject.’“Jewish culture treats livelihood very seriously,” he said. “But in our days, when it is possible for vegans to eat so well that they can even grow fat because so many options are out there, is it really needed to do such things?“If the argument is that it makes money,” he said, “well, gambling makes money, so do drugs. Are we meant to support such things as well?”Veganism is a step beyond vegetarianism. Vegans not only refrain from eating meat, but also from any form of animal products or exploitation such as milking cows or, in some cases, taking honey from the honey bees. Some vegans refuse to wear leather, or use products tested on animals, as they believe humans should not exploit animals at all.Judaism allows Jewish people to eat meat, milk cows and ride horses – provided such activities don’t cause the animal “sorrow.” Kosher slaughter is meant to be quick and painless. However, some rabbis refrain from eating meat, and as long as the individual Jews aren’t causing themselves medical harm, it is permitted to be religious and vegan at the same time.Keisar is adamant that the modern food industry “violates the prohibition [the] Torah placed on causing animals to suffer because without this suffering, they are unable to make a profit.“I got a question from a woman who is learning about our faith to convert,” he said. “She was told that animals are being punished in this world for sins they committed in other lives and that it is lawful to destroy them and eat them.“When the issue is faith, let people believe whatever they want, but if the issue is Jewish law – I dare anyone to show me where such ideas are written.”He then quotes Maimonides, who argued that false ideas are founded “on the mistake made by man, who thinks that he is the reason for the world coming into being” and that “It is not to be believed that all those who are created [literally, present] are for the existence of man, but that the other created beings are [present] for their own well being, and not to serve an outside goal.”

Vegan Kosher label (courtesy)
THE KOSHER food market is a large one, with 86% of the clients not being Jewish at all, but rather Muslims (who prefer kosher food when Halal is unavailable), Noahides (non-Jews who follow the teachings of Noah) or anyone who thinks that kosher food is cleaner than non-kosher food.The market is thought to be worth $27.3b. and will grow to $54b. in the next seven years, Keisar claims.Keisar argued in his 2016 Jewish law study “The complete ‘In front of the blind’” that the modern kosher food industry is violating the instruction to not place a stumbling block in front of the blind, the unaware consumer, as it causes animals “sorrow” while claiming to be kosher.This led to his work being attacked both on the scholarship front, with some pointing to other rulings he omitted, as well as the theological front.Most religious Jews accept the idea that the world was made by God for human beings. So the natural world, including animals, was made for the benefit of man. Some Conservative Jewish thinkers point to the warning in Hosea 13:2, “the sacrificers of men kiss the calves!,” as evidence people can get their moral priorities wrong, for example, by claiming that it is permitted to murder a man in order to set animals free, or defend a forest from being chopped down.In a series of video lectures on his site, Keisar argues that God instructed men and women to care for the animals and not to abuse them. As he walks in a farm with his child, he tells her that the cows she is playing with were “saved from the milk industry” – meaning, bought or brought to live free from the cycle of forced pregnancy and being milked.“A man also has authority over his little children,” he says to the viewer. “This does not mean the children were made for him.”Trained as a writer of Torah scrolls, Keisar points out in another video that Jewish religious law allows the use of animal skin when the animal died from natural causes. Rather than worms eating the corpse, it is permissible to remove the skin for such a holy purpose.“The Torah does not command us to kill animals,” he says.Companies and businesses who are interested in acquiring such a Kosher Vegan certificate can contact his site at https://asakeisar.com/en/vegan-kosher-certification/