Elections can be complicated, so let your smartphone or tablet help in making that all important decision.

By ZOHAR FRIEDMAN
iphones R 311
(photo credit: REUTERS)
Advertisement
Election season is in full swing. Ahead of Tuesday's voting, Appaholic has reviewed and compiled apps related to Israeli Elections 2013. Whether you need apps that tell you more about the candidates, give you real-time updates on the status of the election, or allow you to connect with your candidates and help get out the vote, we've got you covered.Comparing candidatesYou may not be able to vote on your smartphone, but it can certainly be part in your decision-making process this Election season. Zap's "Comparing Prices" app (Hebrew) allows you to access informative profiles on all of the candidates vying to get into the 19th Knesset. What's more, you can help influence your peers by grading the candidates on a scale of one to five stars, much the way you'd rank the quality of an app in the App Store. This way, Zap compiles reviews of the candidates among users, allowing prospective voters to get a feel for how popular the candidates are. 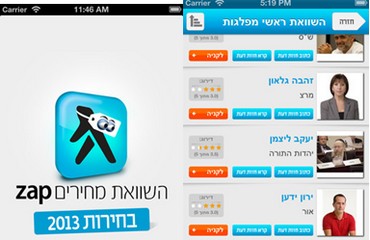 Cost: Free
Supported formats: iPhone, iPod touch, iPadMay your vote be a blessing?Shas was the only campaign to release a party-specific smartphone app, which is slightly puzzling considering the haredi community's somewhat troubled relationship with smartphone technology. Regardless, the app - called Maran Shelita, a Hebrew acronym for “the great rabbi, who should live a good and long life” – can be used to request blessings from Shas spiritual leader Rabbi Ovadia Yosef, as well as access a speech by the rabbi, a video about his life, and a daily lesson in Halaha, or Jewish law.The Central Election Committee ruled that the app violated the Election Law that prohibits against the use of blessings, talismans and curses in campaigns. Shas refused to remove the blessing portion of the application, and was subsequently fined NIS 36,000. 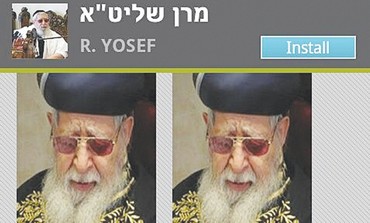 Cost: Free
Supported formats: Android
*While Appaholic was told that Maran Shelita was available for iPhone, we were unable to find the app in the Apple Store.

Click for full JPost coverageBecome a sloganeerThis app isn't downloadable on your iPhone, but it's one of the most playful apps we reviewed. Labor fans can now become part of the party sloganeering process. The Design Your Own Slogan app (Hebrew) on Facebook allows you to create your own anti-Bibi slogan, and for a modest donation to Labor, you can have your message printed on a T-shirt, bumber sticker, regular sticker or sign. Nearly everything about the message is customizable, including the color; the only non-negotiable is that must be addressed to Bibi.Appaholic is a bi-weekly column which thematically reviews mobile apps with a Jewish or Israeli twist. If you have an app to suggest, send details to [email protected]