Appaholic: Top 5 ‘Made in Israel’ apps

Reap the benefits of Israeli innovation with five great apps that show off the best in homegrown innovation.

By ZOHAR FRIEDMAN
iphones R 311
(photo credit: REUTERS)
Advertisement
Israeli innovation and creativity has reached nearly every industry—from hi-tech to green energy development to—you guessed it—smart phone applications. This week, celebrate Israel innovation by downloading any of these great and useful apps popular among Israelis and users abroad. Best of all: Most of them are free. On the roadWe've all experienced frustration with our GPS navigation systems, especially when they lead us straight into traffic jams. Want a GPS navigation app that doesn’t just tell you where to go, but where not to go? Waze is a unique GPS system that crowd sources traffic to find the most practical, least-congested driving route. All Waze users connect to a larger system that crowd sources and pools user information to most effectively route you to your destination. So use Waze, contribute to the common driving good, and get where you need to go faster. Israelis love it. Give it a shot. It's free. Waze
Cost: FreeSupported formats: iPhone, iPod touch, iPadAt the superMaking the right eating choices isn't always easy; but typically, healthy eating comes down to a question of will and knowledge. While Fooducate can't make you decide to eat better, it can council you on whether or not a potential food is a good option. The app uses the camera in your phone to scan bar codes at the grocery store, immediately generating a profile of the food in question, and assigning it a grade between A-D. It will also notify you whether the food contains any controversial preservatives, additives or ingredients that you might not be aware of, even if the problematic ingredient is going by a different name. So make like a checkout girl and start scanning your favorite foods; hopefully you won't be too shocked! Fooducate
Cost: FreeSupported formats: iPhone, iPod touch, iPad; AndroidFor the kidsWhile we don't necessarily advocate throwing technology at your children to sedate them, there are times when it's appropriate and even necessary. The Israeli app Touchoo offers a series of interactive children's books (in Hebrew and English!) which will be sure to quiet your unruly toddler during important times.Better yet, even though you're soothing them with technology, it's still technically a book. So quiet your kids, and don't feel guilty about it! 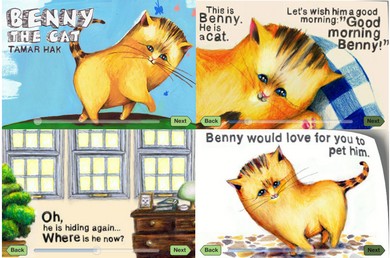 Touchoo
Cost: Prices vary depending on bookSupported formats: iPhone, iPod touch, iPadDiner's delightMaking eating choices may be a question of good nutritional education; making dining choices is inarguably a social affair. Fiddme allows you to connect to other enthusiastic diners and foodies to find the best places to eat. But don't just take their suggestions, make your own: Share photos, review restaurants, and get involved in the world of social eating. However, remember that "being social" transcends your presence in the virtual world—try to limit your smart-phone use throughout the actual meal! Fiddme
Cost: FreeSupported formats: iPhone, iPod touch, iPad; coming soon to AndroidTalk until you dropViber is arguably one of the most widely used Israeli apps. This app will lighten the toll your constant chatting takes on your cell phone plan—especially if your cell phone plan includes a liberal data option. Viber allows you to chat with other viber users wirelessly, much in the same way you would use your cell phone. Be warned, however: Ifyour internet connection is bad, your Viber call will likely be choppy and unpleasant. However, Viber will notify you if your internet connection is too weak to carry a call.