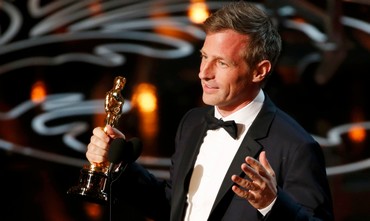 Jewish Hollywood was well-represented on Sunday night at the 86th Academy Awards in Los Angeles.Woody Allen's Blue Jasmine was recognized with one of the top awards of the night when Australian Cate Blanchett won the best actress Oscar for her role as a socialite who suffers a breakdown.
The win was Blanchett's second Academy Award. The 44-year-old was favored to win this year's prize after picking up Golden Globe, Screen Actors Guild and BAFTA awards earlier this year. Spike Jonze, born Adam Spiegel, took home an Oscar for best original screenplay for Her. The film, starring Joaquin Phoenix and Scarlett Johansson tells the story of a lonely man who falls in love with the automated voice on his phone.
Israeli Niv Adiri was one of a team of four who took home the award for best sound mixing for Gravity. Alfonso Cuaron took home the best director award for the film, which led the pack with a total of seven Academy Awards.

The Lady in Number 6: Music Saved My Life won best documentary short. It's subject, Holocaust survivor Alice Herz-Sommer, died last week at age 110.
However, Palestinian nominee Omar lost out to Italy's The Great Beauty for best foreign film.
Singer and actress Bette Midler performed "Wind Beneath My Wings" for the "In Memorium" section of the program, followed by Broadway star Idina Menzel who sang best original song winner "Let It Go" from the Oscar-winning animated feature Frozen.
The slavery drama 12 Years a Slave won the Academy Award for best picture making history as the first movie from a black director to win the film industry's highest honor in 86 years of the Oscars.British director Steve McQueen's unflinching portrayal of pre-Civil War American slavery also won two other Oscars, including best supporting actress for newcomer Lupita Nyong'o and best adapted screenplay based on the memoir of Solomon Northup, a free man sold into slavery in Louisiana."Everyone deserves not just to survive but to live, this is the most important legacy of Solomon Northup," said McQueen in his acceptance speech.In one of the strongest years for film in recent memory, the 6,000-plus voters of the Academy of Motion Picture Arts and Sciences scattered golden Oscar statuettes among the many acclaimed movies in contention.
It was a good night for the scrappy, low-budget film Dallas Buyers Club, a biopic of an early AIDS activist two decades in the making that won three Oscars, including the two male acting awards.Matthew McConaughey, in a validation of a remarkable career turnaround, won best actor for his portrayal of the homophobe turned AIDS victim turned treatment crusader Ron Woodroof, a role for which he lost 50 pounds (23 kg).His co-star, Jared Leto, won best supporting actor for his role as Woodroof's unlikely business sidekick, the transgender woman Rayon, for which he also slimmed down drastically.
Comedian and talk show star Ellen DeGeneres returned as Oscar host on Sunday in an appearance many saw as calculated to project a lighter, more affable tone for Hollywood's biggest night after the provocative performance of her immediate predecessor, Seth MacFarlane.In the comedian's easy breezy style, DeGeneres mixed with the crowd, taking a star-studded selfie with the likes of Brad Pitt and Angelina Jolie that broke the record for retweets on Twitter.The big loser of the night was director David O. Russell's 1970s crime caper American Hustle, which walked away empty-handed despite earning 10 nominations, the same number as Gravity.