There's no magic formula for how to build a successful photography career.

By TOM LANGFORD
Close up a flower 311
(photo credit: Tom Climes)
Advertisement
Tom Climes is a talented amateur photographer in the US. He tells me that his interest in photography began in high school but he didn't pursue it seriously until a few years ago, and he is now 53 years old. He would like to work as a photographer and asked me for some advice about technique and how to build a successful photography career."Photography has opened up the creative juices inside of me that I had thought was dried up long ago," he says. "It has become a way for me to forget about my physical pain and enjoy the beauty of this world captured in a moment in time. That is how I'd like to spend the rest of my days." 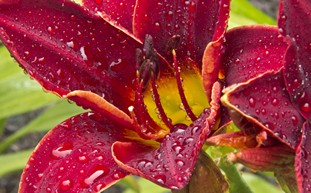 As you can see from this picture he can take a superior flower shot. Let's apply the critique technique, step 5, to this picture:What works:
-The beautiful detail and color.What does not work:
-Some of the flower is obscured and the stamens don't clearly stand out.
Could it be improved?
-Before taking the shot I would have done a little rearranging to show the right side more clearly. Afterward, I would have used Photoshop to sharpen and bring out detail, especially of the stamens. 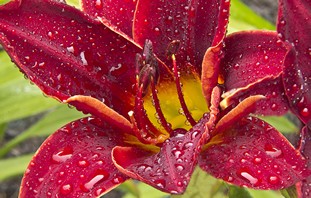 In this retouched version I have indicated the sort of effect I'd be looking for. 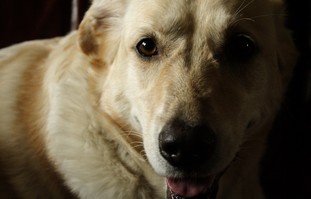 Here is Tom's excellent portrait of a friendly dog.What works:
-The dog's expression and the intimacy suggested by the tight crop. There is a wonderful use of natural light and shade.What does not work:
-The dog's chin is missing and there is too much black space to the right. Could it be improved?
-I would have moved the camera a little to the left and moved back, or zoomed out slightly, to reveal the chin and more of the body. 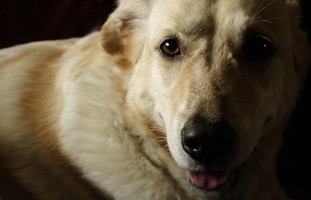 Here I have retouched the picture to show the effect I'd be looking for.I hope Tom will find this advice useful. He has lot's of talent and is well on the way to being a professional image maker. The small touches I've suggested are really the minimum needed for him to move up to the pro level, but I'm sure he can make it.There's no magic formula that can tell Tom how to build a successful photography career. Depending on his personal circumstances the choices open to him are probably fairly limited.To make money from stock isn't easy - you have to seek out and take the sort of professional pictures that agencies want, then submit them in large quantities. Perhaps he could develop a niche for pet portraits too.Photographers often start out in their youth by assisting successful commercial photographers. They learn the ins and out of the job, but more importantly they  develop contacts with the people who later on will give them work. Whatever Tom does I  wish him well and would advise to him to not give up the day job!
Advertisement
Subscribe for our daily newsletter