By TOM LANGFORD
Wedding with blurred background
(photo credit: Thinkstock/Imagebank)
Advertisement
Tom Langford is a commercial photographer, professional retoucher, and a website designer.Before digital cameras became popular I used to teach basic photography to students at an arts center in London. Without exception they all came equipped with metal-bodied SLR cameras complete with the standard 50mm kit lens. Zoom lenses were usually of poorer optical quality and not as widely used as they are now.One of the first things I demonstrated was how to control just what was in focus - the "depth of field." I would stand three books about one meter apart and focus on the middle one. A ring at the front of the lens controlled the aperture - the hole inside the lens through which light passes - turning it one way made the aperture larger, and the other way made it smaller. With larger apertures only the central book was in focus; with smaller apertures all three books came into focus. In those days it was easy to take portraits and make the backgrounds artistically blurred simply by choosing wider apertures. Today the same effect is still possible with modern, professional digital SLRs which have image sensors the same size as film negatives, 36 x 24mm. Amateur digital SLR cameras use half-size sensors, and compact cameras have very small sensors indeed. Unfortunately smaller sensors produce a greater depth of field making it more difficult to create out-of-focus backgrounds. The digital revolution has brought many benefits, but amateurs cannot create those arty and beautiful blurred backgrounds as easily as they could with the old SLR film cameras.I have an older photographer friend who now uses a modern half-frame digital camera. His shots from the past using a film SLR have a more artistic look to them but he never knew the reason why. Now that I have explained how the size of the sensor and the depth of field are connected I hope he will buy one of the full-frame, or "FX", professional SLRs and regain what he lost by becoming digital.The professional touchIf you have a "half-frame" (or "DX") digital SLR and a standard zoom lens, here's a tip that will help you to take professional looking portraits with nicely blurred backgrounds:First it's important to understand that the distance between you and your subject will greatly affect the look of the background. Take a look at the picture below taken with a DX SLR, a Nikon D90. At about one meter away from the subject I had to use the wider end of a zoom lens. 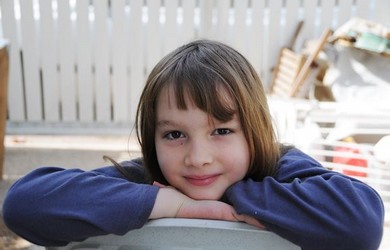 As you can see, the wider zoom captures a wider expanse of background. Although the background is slightly out of focus, it'is full of distracting detail and certainly does not have an artistic look to it.In this next picture I have marked a small area of the background in green. 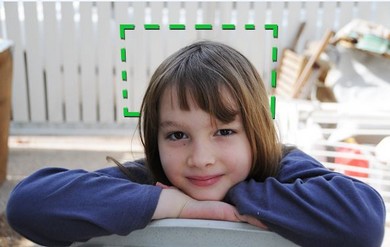 If I now move backwards to a distance of about four meters the relative sizes of the subject and background will be greatly affected. I will have to use the telephoto end of the zoom to frame a similar shot and produce the result shown below. 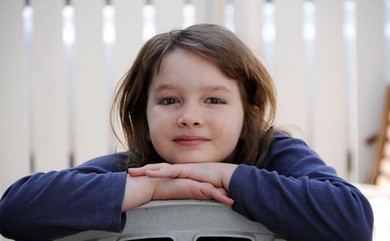 The telephoto end of the zoom captures much less of the background - exactly the amount I had marked in green. Since a smaller area of the background now fills the frame, it appears to be "stretched" and more out of focus than before. It has that arty, blurred effect that you used to get so easily with film SLRs.The next time you take a portrait try using this technique of shooting from further away than usual and zooming in. Not only will the background be more out of focus, but you will find it's easier to select an uncluttered area to artfully blur. Of course if the background is too close to the subject it will be in focus too; it’s best if the background is about two meters or more behind the person.AperturesI mentioned apertures and their effect on the depth of field. The pictures above were all taken at about the same aperture, F5, set automatically by the camera. In very bright conditions the camera may set a very small aperture, such as F20 and the background will probably look too sharp. In this situation you will have to take control and use the Aperture Priority shooting mode. Simply turn the dial on the top of your camera to the "A" or "Av" position. You will then be able to select the aperture by turning a thumb-wheel or dial. Select a wider aperture such as F5.6, F4, etc.Compact camerasCompact cameras have tiny image sensors that produce an enormous depth of field. This is fine for family snapping since you generally want to see everyone in focus. If you would like to explore creative artistic blurred effects, you will need to upgrade to a SLR. About the only way you will get an out of focus background with your compact camera is to take a really close-up shot. At macro distances depth of field is severely reduced, so if you take a shot of a flower the background will usually be blurred. For most portrait shots, however, the background will be sharp. I would still advise moving further back from the subject and zooming. You will then be able to choose a smaller area of the background to fill the frame and be able to produce a good, clean and uncluttered image.Send me your picture If you are aspiring to develop your photography skills, send me a picture and I will publish one at the end of my next article with some constructive feedback.  Send one picture only, at a reduced size to [email protected]  Tom Langford is a commercial photographer, website designer, and professional retoucher. He teaches photography courses for beginners and advanced. Details of his courses and field trips at: www.langford.co.il/coursesFollow @JPost_Lifestyle
Advertisement
Hot Opinion