By TOM LANGFORD
Product shot
(photo credit: Tom Langford)
Advertisement
Tom Langford is an event and commercial photographer, professional retoucher, and a website designer.In the years before digital cameras, top magazines around the world would shoot their products in large studios using special photography tables and flash lighting. Everything had to be spot-on since they used transparency film and had no possibility of altering the images later.Eventually digital cameras took over and the magazines started to courier the products to the photographer’s home. I built a small studio and still used flash to light the larger products, but for small items I used natural daylight and the simplest of micro studio setups.Many people have small businesses and need pictures of items for sale. Unless you know what you are doing it’s easy to take boring, dull pictures that will took terrible on a website or when used in a brochure. Here’s how to take professional shots of smaller items on a kitchen table.The micro studio First you need a large window that does not allow any direct sunlight to enter.You can support the products on a table or a chair placed about two meters away from the window. Arrange some sheets of white A4 paper as shown in the picture below. The sheets at either side reflect light onto the product and produce a clean, even illumination. 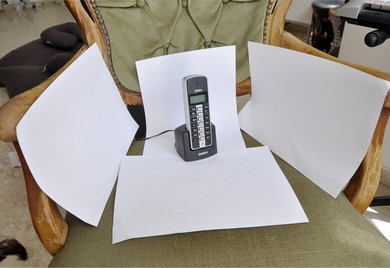 Photographing a product (Tom Langford)
It’s important that the chair or table is at an angle to the window. You will be standing between the micro studio and the window and must not let your shadow fall across the product. For products with reflective surfaces you will need to play around with both the angle the studio makes with the window and the angle you take the shot from. For the product to be completely sharp you need to have some control over your camera, whether it’s a compact or an SLR. Use the camera on P (Program) mode and set the lens aperture to F8. Smaller apertures, such as F8 or F11, help to keep the entire picture sharp. Larger apertures such as F4 will cause parts of the product to be out of focus. There is no need to use a tripod - the shutter speed at this aperture was 1/100 sec, which is fine for hand-held shots as long as you are careful. 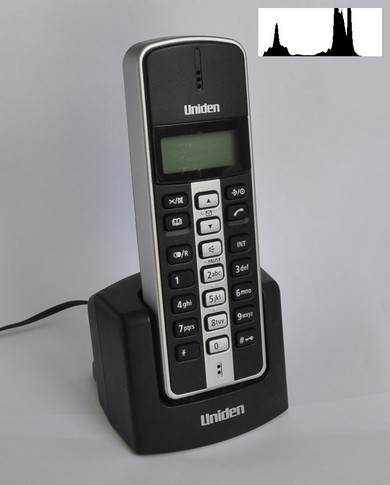 Photographing a product (Tom Langford)
The picture looks too dark. Use the “+/-“ feature, found on most compacts and SLRs, to brighten up the shot. Lightening a shot uses “exposure compensation” and you might have to refer to your camera manual to see how to use this feature. Dial in enough compensation to lighten up the picture until the whites looked white. 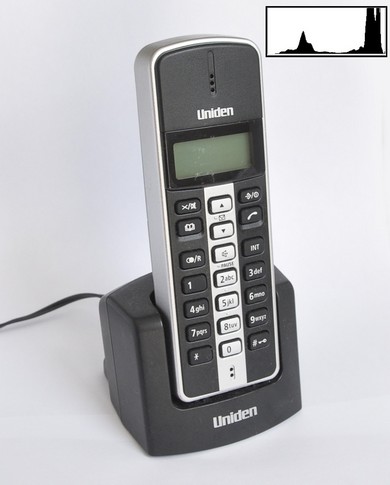 Tom Langford
The picture is now beginning to look bright and clean – just the sort of shot that magazines love on their pages.In the top right of these shots, the histogram can be seen. This is a graph showing how the darker and lighter tones are distributed in the picture. You can find it in the display menu of most digital cameras. If the graph extends to the far right the picture will contain pure white. Although it sounds technical, it’s a simple way to check exactly how white the whites were in each picture. Swinging itIt can be a good idea to take the shot at a three-quarter angle. It is very important that shots of products do not look flat and boring. Taking the shot at an angle not only shows more of the product but also gives greater depth to the picture. But for the shot to look complete, it also needs to look alive, as if it could almost move or jump off the page. Using the professional trick of slightly tilting the camera before taking the final shot can create the effect. 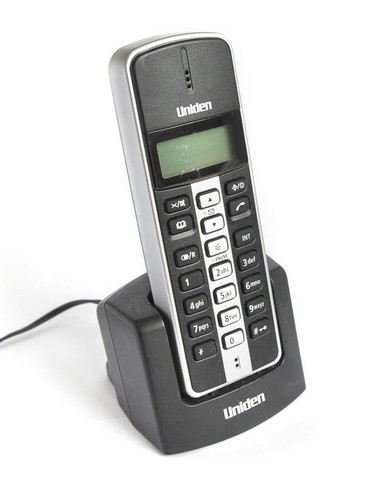 Tom Langford
The slight tilt brings a sense of movement, which is a very important quality. Magazine pages, brochures and websites need this sort of effect to help bring them to life. Slightly adjust some areas of contrast and brightness using Photoshop to give a final polish.Excellent results can be achieved with the simplest of means. It will take practice and patience and some familiarity with your camera. If you are an enthusiast it is well worth the effort to master the art of micro studio work and add another enjoyable string to your bowConstructive Feedback:  If you are aspiring to develop your photography skills, send me a picture and I may use in one in my articles with some constructive feedback.  Send one picture only, at a small size to suitable for emails to [email protected].If you don’t know how to send a photo by email at a small size please look at my Brief Guide to Picasa:  www.langford.co.il/courses/PicasaGuide.html Tom Langford is an Event and Commercial photographer, website designer, and professional retoucher. He teaches photography courses for beginners and improvers. Details of his courses and field trips at: http://www.langford.co.il/courses
Advertisement
Subscribe for our daily newsletter