The story behind the ad on the Post’s most famous front page.

By STEVE LINDE
FEBRUARY 19, 2010 17:32
1948 post yemin 311 GOOD
(photo credit: Steve Linde)
Advertisement
If you look closely at the historic front page of The Jerusalem Post of May 16, 1948, with its banner headline “State of Israel is Born,” you will notice a small advertisement on the top left ear.It reads as follows: “If you can’t come to town, please telephone 4607.
Lighting, Heating, Cooking, Refrigeration;
CARL MARX
9 Princess Mary Ave., Jerusalem.”Well, guess what? The shop is still around, making and repairing lamps just as it did when the state was established. But it has now moved just down the road, to Rehov Shimon Ben-Shetah, and although it is still owned by the Marx family, it is run by the Yemins – Edna and Meir.Carl Marx’s daughter, Yehudit, recalls its long history: “Actually, the shop was originally owned by a man named Zalkind, who opened it in the 1930s, and my father started as an electrician working for him. Then, after a while, Zalkind gave the shop to my father.”Carl and his wife, Elisheva, were immigrants from Germany, and both came from a small town near Frankfurt.“I think my father might have been named after the original Karl Marx,” says Yehudit. “I’m really not sure.”Carl was born in 1903, exactly 20 years after the founder of Marxism died, and he came to Palestine in 1933.He died of a heart attack 25 years later, in 1958, leaving his wife and son, Gad, to run the business.In 1976 they decided to hand over control of the business to a young electrician who had been working for them.Edna Yemin says the shop was originally on Princess Mary Avenue (which today is called Rehov Shlomzion Hamalka), but it was later sold, and the main shop operated from where it is today, on Shimon Ben-Shetah (named for the man who was the first head of the Sanhedrin during the reign of King Yanai).“My husband worked for the Marxes, making lamps at their factory on Ben-Sira, not far from their main shop on Shlomzion,” she says. “This shop, on Shimon Ben-Shetah, was the warehouse then. My sister, Freda Cohen, began working here in 1970. One day, when Mrs. Marx was getting old and tired, she approached Freda and asked her if my husband would like to run this shop. That was in 1976. We agreed, and I began working here then.”Elisheva Marx died in 1992 and is buried next to her husband on Har Hamenuhot.Today, Edna Yemin is in charge of the day-to-day operation of the shop, and the Marx 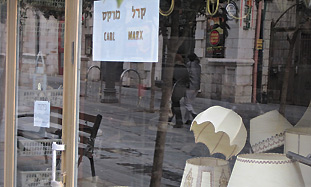 children, Gad and Yehudit, who are in their early 70s, have taken a back seat.“Even though the shop is still in their name, we have run the business since 1976. Today, it is really me who runs the shop and my husband who supervises the making of lamps in the factory and the repairs. We are continuing the tradition of making lamps. I sew the lampshades by hand, and my husband deals with the electrical side of things.”Yemin says the shop has not been adversely affected by the nearby construction of the light rail and the lack of parking in town, and it maintains its old clientele while attracting new customers as well.“We have our regular clients, some of whom are quite old, and people who hear of us by word of mouth. We are unique. There are no other shops in Jerusalem that make handmade lamps according to the specific requirements of clients.”She laughs about the four-digit telephone number the shop advertised in the 1948 Jerusalem Post ad.“We gave the main telephone number, which had many extensions, to the post office. Today we have another [seven-digit] phone number,” she says.As for the future, Yemin expresses her desire for her youngest son, Omri, 25, to take over the running of the business.“He has been working with my other two sons as air conditioning mechanics,” she says. “But I think he would be interested in running the shop instead.”Asked what working in a shop called “Carl Marx” means to her, Yeminproudly brings out a copy of the original 1948 front page, which hasbeen kept in the shop, and notes that an artist once came in to copy itfor a painting now on exhibition at a gallery around the corner, onShlomzion Hamalka.“Working here means a lot to me. It means that a shop that was openedduring the British Mandate is still going strong, while many othershave closed over the years,” Yemin says.She adds with a smile that not everyone is thrilled by its name, though.“A lot of tourists come and take pictures because they see the ‘CarlMarx’ sign,” she says. “Some Russian immigrants get very excited.Others refuse to write the name ‘Carl Marx’ on their check. They saythat name gives them the chills, and they ask me to fill it in forthem.”
Advertisement
Subscribe for our daily newsletter