Show me a story

A Bezalel event looks at how local children’s book illustrating is evolving. 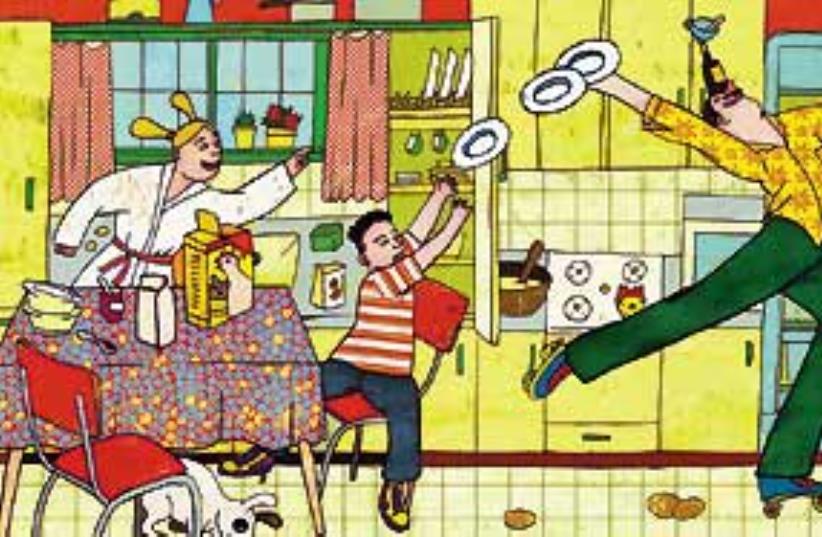 children's book311
(photo credit: Courtesy)
Advertisement
It is probably safe to say that when parents think about visual influences on their children, the first item on the list is TV or the Internet. But then there are also are books with illustrations that may very well convey the proverbial thousand words.The latter is the subject of an innovative conference at the Bezalel Academy of Art and Design, which will take place at the Hebrew University’s Mount Scopus campus on May 5 and goes by the title “And This Illustrator Is Me – Illustrating Children’s Books in Israel.”The Visual Communications Department event will address a range of relevant topics, including talks on “How to Illustrate a Street,” featuring author Nurit Zarhi; “Women Illustrator-Writers” with award-winning septuagenarian artist Alona Frankel chief among the speakers; and “Visual Reading” with a panel that includes illustrated children’s literature researcher Dr. Tor Gonnen, author and founder of the School of Visual Theater Marit Ben-Yisrael, and author-illustrator Rutu Modan, who is also a lecturer in the Visual Communications Department.The Visual Reading session sounds intriguing. For a start, the mixed sensory implication of the title offers all sorts of possibilities. Modan is enthused about the upcoming event and will, no doubt, offer her listeners some of the insights she has gained during her two decades in the profession. “I studied graphic design at Bezalel with an emphasis on illustration,” she says. “I always loved drawing and texts and stories, so illustrating books, for me, was the perfect combination.”Naturally there have been changes in the field since Modan started out. “A lot has changed in children’s book illustration,” she states. “In those days the whole thing was very conservative. There were things you couldn’t put in your drawings. It was all about blond kids and conventional families.” Psychology, it seems, was an important factor in laying the guidelines for the permissible and the unacceptable. “I wasn’t allowed to draw teeth,” Modan recalls. “That was considered to be too frightening for young children. But today things are far more open and accessible, and techniques and materials have improved a lot.”The field was even more strictly regulated when Modan herself was a kid, although she had a parental escape route. “I was always interested in comics and caricatures. My parents spent a few years in the United States in the 1960s, and my mom built up a sizable collection of comics and caricatures. So I read things like Peanuts, Popeye and Dennis the Menace. But when I went to Beit Ariela [library], I was embarrassed to ask for Peanuts and other comic books for myself – I was already in my teens – so I’d say it was for my kid sister.”When discussing children’s literature, there generally has to be some educational element that must be addressed. Some believe that today’s children are overexposed to visual stimuli and that perhaps they should be allowed to do some of the work themselves, such as completing less detailed pictures with their own imagination. That is not a school of thought to which Modan subscribes. “I don’t see the difference between telling stories with or without detailed pictures. Bruno Bettelheim [noted 20th-century child psychologist] was against illustrations in children’s books, but I don’t agree. If I draw a picture with a pink sky and the child looking at it has up to that point only thought of the sky as being blue, perhaps that can open up a new avenue of thought and imagination for him or her.”In the final analysis, though, Modan says she is just an illustrator. “I’m not trying to educate children. I draw the way I feel and based on my own understanding. I don’t create illustrations to helps a kid’s imagination develop. That’s not my job.”Meanwhile Merav Salomon, who runs the illustrators’ stream of the Visual Communications Department and is one of the driving forces behind the conference, believes that illustrators have to take that aspect into consideration. “We in the department are very much aware that we are training the cultural leaders of tomorrow,” she says. “Today’s students will be illustrating the books that our grandchildren will, hopefully, enjoy. We are very aware of the heavy responsibility we have to contend with, and we have lots of courses on children’s book illustration in the department.”Salomon says the illustrator has many factors to take into account when presenting the written text in a visual form. “Pace is very important. The parent reads the words while their child ‘reads’ the picture. I’m sure there are lots of parents who have experienced reading a page when their child starts turning to the next one. That means the child has finished with that page, and that can be a problem and can disturb the delicate balance between words and pictures and the different sensory experiences they generate.”

While Salomon believes that the quality of illustrating children’sliterature in Israel has improved greatly over the years, she saysthere is still some way to go. “There is always room for improvement.We have author-illustrators, like Rutu Modan, who have had bookstranslated into many languages, and that is a great source of pride forus all. But it is also important for us to meet with our counterpartsaround the world and to feed off each other, like at the BolognaChildren’s Book Fair, which is the most important event in the field.We almost always have some representation there, and that gives us anopportunity to show the world what Israel has to offer.”Multichannel TV and Internet notwithstanding, Salomon retains her faithin the illustrated book as a preferred form of entertainment for youngchildren. “As long as kids go to sleep in a bed and not in somespace-age cocoon, there will always be that precious parent-childinteraction with a bedtime story.”
Advertisement
Subscribe for our daily newsletter