8 fun things to do on Israeli Independence Day

More to do than just fan the barbecue as Israel celebrate's its 69th birthday. 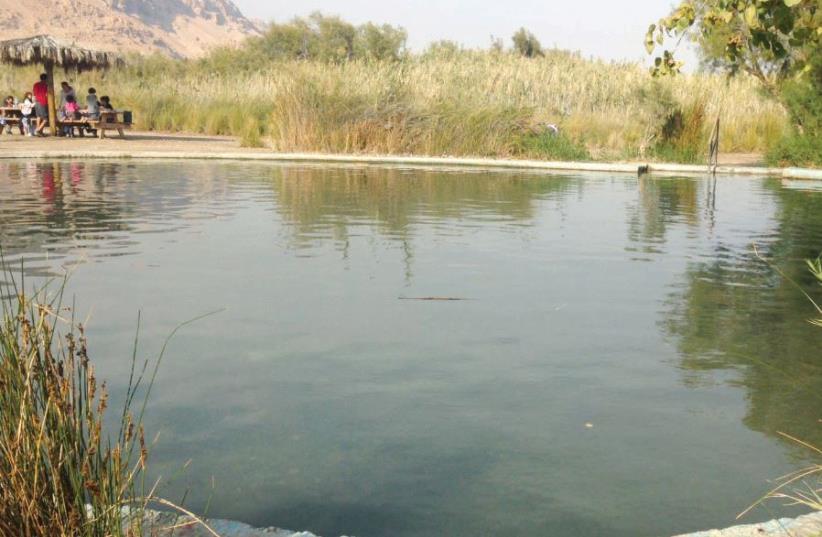 Waterside picnic in a shaded spot at Einot Tzukim
(photo credit: MEITAL SHARABI)
Advertisement
On Tuesday, we will celebrate Independence Day. Family-friendly celebrations will once again take place in national parks, heritage sites and museums across the country. This is a great opportunity to delve into our history, spend time in nature and feel proud to be Israeli. Below you’ll find a number of suggestions for ways to spend the day other than fanning your barbecue.Kibbutz Ein Shemer The Old Courtyard Museum at Kibbutz Ein Shemer is celebrating with a reenactment of the early days on the kibbutz. There will be a guided tour of the dining hall, featuring actors dressed up as pioneers, and an audio-visual show. Afterwards, visitors will learn what it was like to be a pioneer by taking part in construction, tiling, putting up tents, plowing, washing clothes and guard duty. At the end of the day, visitors will bake (and eat) rolls, ride on a tractor, make arts and crafts, visit the tractor museum and take home a photograph of the whole family dressed up as pioneers.Prices: Ages 2-5: NIS 40; youth: NIS 45; adults: NIS 40.
Date: May 2, from 10 a.m. to 3 p.m.
Details: (04) 637-4327.

Tower of David Museum On the eve of Independence Day, the Tower of David Museum in Jerusalem will once again be holding its annual evening independence celebration in conjunction with Jerusalem’s Bina Secular Yeshiva. This year’s celebration is called “Hammers in the Night – The Next Generation: Trends and Movements in Israeli Culture.” Leading spoken-word poets will perform in a huge slam jam session. Later in the evening, Victor Jackson will perform an acoustic hip-hop show, there will be a YouTube party, and the evening will end with a drunken karaoke party.Date: May 1, from 8 p.m. until the party ends.
Price: Pre-sale: NIS 60; day of event: NIS 80.
Tickets: 2884* Nahalal Police Fortress The Council for Conservation of Heritage Sites in Israel is opening its doors to visitors for free. One of the sites is the Nahalal Police Fortress, which is located between Nazareth and Kibbutz Yagur. This fortress played an important role in pre-state times when there was a strong need to defend residents. At the site, you’ll find a display, and an audio-visual show will explain the relationship between the guards and the policemen during the Mandate period.Date: May 2
Times of guided tours: 9 a.m., 11 a.m., and 1 p.m.
Details: (04) 641-5073.Jezreel Valley Station Another fun place to hear tales about Jews who came to settle the land in pre-state days is the Jezreel Valley Railway Station at Tzemah Junction. The renovated station, which is located on the grounds of Kinneret College, was built by the last Ottoman sultan, Abdul al-Hamid, at the beginning of the 20th century. The station was built in a strategic location, and is divided into a few rooms, including a food court, surrounded by walls that are covered with photos from times when the station was active. Nearby, you’ll find the stationmaster’s house, and a railroad tie with a blessing for success from the sultan etched in it.Guided tours only.
Reservations: (04) 665-3728.Einot Tzukim The Israel Nature and Parks Authority is opening the pools at Einot Tzukim (a.k.a. Ein Feshkha), which is the lowest nature reserve in the world, and where a number of springs converge. There will be three guided tours on Independence Day at Einot Tzukim during which participants will learn about the animals that live in the reserve on the edge of the shrinking Dead Sea. There are a number of shaded spots great for picnicking in the reserve, and the wading pools, as well as the large pool, will be open for swimming.Dates: May 1 (Remembrance Day) and May 2 (Independence Day).
Tours will take place at 10 a.m., 12 noon and 2 p.m.
Cost of tour included in entrance fee.

Shayarot Ridge The Society for the Protection of Nature in Israel is inviting families who love hiking to join in on a journey on the Shayarot Ridge in the Jerusalem Hills. This is an incredible opportunity for families to spend Independence Day walking together, enjoying the plush woods and hearing fascinating stories about the days when the capital was under siege. The guide will also talk about the construction of the “Burma Road,” and how it enabled the Jews to break through the siege. The hike will pass through the Castel fortress and bunkers, and reach an incredible spot at the end overlooking Jerusalem.Tours will be run by Ofra Field School. Appropriate for children aged five and up. Includes entrance into Castel National Park.Hiking difficulty: medium.
Date: May 2.
Registration required: 03-638-8688.Mini Israel Mini Israel will be celebrating Israel’s 69th birthday with workshops, tours and a Blue and White show by Itzik the Clown. During the guided tours, visitors will hear the story of the state’s establishment. There will also be a flag-making workshop and riddles to solve.Date: May 2.
Park will be open from 10 a.m. to 5 p.m.
Guided tours will start at 11:30 a.m. and 1:15 p.m.Ben-Gurion’s Hut Visitors to Ben-Gurion’s Hut in Sde Boker will be able to take part in history by composing a paragraph they think is missing from the Declaration of Independence, and then sign it right next to where the first prime minister signed his own name. At the end of the day, the best ideas will be copied and sent directly to the Prime Minister’s Office in Jerusalem. All guests will receive their own copy of the Declaration of Independence, which they will be able to sign and take home as a souvenir.Date: May 2, 10 a.m.-4 p.m.
Free entrance.Translated by Hannah Hochner.