A (Not So) Innocent Abroad: A woman named Carola

I would give my last breath to give Carola just one extra minute of happiness in a world that so ruthlessly wronged her. A world which she still selflessly illuminated with her beautiful light.

By DANIEL K. EISENBUD
AUGUST 19, 2011 16:57
Carola Greenspan
(photo credit: Daniel Eisenbud)
Advertisement
The most common question I get asked by Americans and Israelis alike since making aliya one year ago is a uniformly incredulous and perplexed “Why?” Fair question. After all, I’m not remotely religious; had a relatively successful career back in New York City; a luxury apartment on the 26th floor in a whiteglove, marble-floored, doorman-concierge building with sweeping views of Manhattan; a boomin’ 50-inch-screen TV; hi-fidelity speakers that would make the members of Spinal Tap bow to me; a washer and dryer, and countless other luxuries; family and friends; a beautiful girlfriend whom I adored; and perhaps most importantly, stability.In many ways, I had it all.Then, to the astonishment of everyone who ever knew me, I bought a one-way ticket to Ben-Gurion Airport, put all my belongings in a storage facility in the Bronx, packed two suitcases, and moved to a small kibbutz in the middle of the Negev Desert.There, I lived in a ramshackle room no more glamorous than a prison cell, furnished with a small plywood bed (sans box-spring), tiny fridge, and barely standing, discarded wooden desk I found one day by a trash pick-up site. Compared to my old life, I lived like a hobo. And lest I got too comfortable, there were also nightly military exercises only a few kilometers from my kibbutz, where heavy artillery and sonic booms from fighter jets regularly woke me in a state of horror in the middle of deep sleep.Even worse, I didn’t speak a word of Hebrew, have a friend or family member in the country to speak of, and absolutely no job prospects.So, back to the question at hand: Why did I do it? The answer is actually very simple: My grandmother.Her name is Carola Iserowski Greenspan, but I have lovingly called her “Savta” since I was old enough to speak. And at a fighting weight of roughly 85 pounds (soaking wet), a feeding tube implanted in her abdomen, a complete inability to walk, bathe herself, brush her teeth, or even remember her name or where she lives, at age 89, she remains the most powerful, influential and inspirational force I have ever known.Carola is the sole survivor of a family of 65, massacred by Nazis for being Jewish.She had two brothers, named Herman and Adek, and a sister named Stephanie. Her parents were named Joshua and Bella. Of course, I never had the honor of meeting any of them – or even seeing a single picture of one of them – but by all accounts, they were very decent, hardworking people.Carola was the baby of the family, and a teenager when her family – my family – was slaughtered.My grandmother was orphaned in the most traumatic way conceivable, and went on to survive incarceration in Auschwitz, Birkenau, Stutthof, Theresienstadt, numerous death marches, and countless acts of profound cruelty and indignation.Despite her inhumane treatment, she was known to lovingly care for orphaned children at whatever ghetto or death camp she was imprisoned in, watching over them as only a true guardian angel could, or would.While she was in a ghetto in Lodz, Poland, the Nazis decreed that all the children there must be gathered inside a local stadium. My grandmother carried a sick six-year-old boy named David on a pillow because he was suffering from meningitis and was too weak to walk.Once inside, soothing German children’s songs deceptively played from loudspeakers as SS henchmen meticulously orchestrated the arrival of the unsuspecting youngsters.Shortly after all the children were rounded up, a Nazi ripped David from Carola’s arms and threw him into the back of a truck like a rotten, hot potato to be carted off – with hundreds of other children – to his death. All of this to the sounds of a Disney-esque happy fantasy. 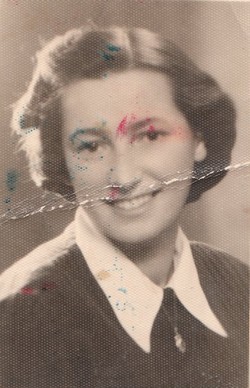 Of this experience, Carola would only say, “I was screaming with all my heart, but didn’t make a sound.”I remain haunted by this image, and the profound evil it invokes.Sadly, the stories of the massacre of my family and David are not remotely unique, and millions of other tragedies experienced by millions of other innocent victims have scarred countless families, and will continue to do so for generations to come.However, these horrors must be remembered – even painstakingly documented in vast libraries – because they are our story. And, particularly in light of incessant Holocaust-deniers and other anti-Semites who would love nothing more than for our collective history to be erased, it must be recounted to new generations of men, women and children – Jew and non-Jew alike – with accuracy and dignity.Carola is part of a sacred society that runs the risk of being forgotten, or even worse, denied their most sacred and deserving truth.Her tragic history alone qualifies her for that which our enemies so pathetically and perversely attempt to achieve by killing themselves – along with as many innocent people as possible: immortality.But what truly makes my grandmother a transcendental figure to me is not her tragic history – it is her unshakable core decency and humanity, despite her history.Indeed, Carola was an extraordinarily loving and affectionate mother to my mom and uncle, and grandmother to me and my sister, as well as a beloved friend whose kindness is legendary. She was always very positive, viewed life with great joy, lived each day without a hint of victimization, and was as warm, worldly and classy as they come.She taught me the inherent dangers of inactivity when wrongs are committed, and to love people of all colors and faiths, equally.At my lowest points, she always reminded me: “The sun came out for me after Auschwitz, and it will always come out for you, too.”How in the world could anyone argue with a statement like this, coming from a woman like this? My love and respect for her is beyond compare.That said, she became quite ill following a stroke a few years ago, and while she was convalescing I asked her if there was anything I could do to make her happy. Without missing a beat, she responded, “Go to Israel and make sure that what happened to me never happens to anyone again. Contribute, Danny.”When I said that I would, her eyes lit up and danced as I had never seen before.Three months before I made aliya, I moved in with Carola in Riverdale, New York, to help care for her, and to simply be with her before embarking on my new life. Every day we would sit together and sing her favorite Yiddish songs that I downloaded for her from iTunes – from The Barry Sisters to Chava Alberstein, you name it, we sang it – eat our meals together, and hold hands.I always made sure she was surrounded by colorful roses, and brought her her favorite dark chocolate to coax her into eating when she otherwise refused.I was saying goodbye to the greatest person I ever knew, and I was going to do it right.The most painful conversation I’ve had in my life took place on the afternoon of July 10, 2010, at my grandmother’s bedside.As a taxi waited for me outside of Savta’s apartment to take me to JFK, I had to say a last goodbye, knowing that I would likely never be with her again.Tears poured down my cheeks as I explained to her that I was about to fulfill her wish for me. I could barely articulate a sentence through the pain, but I believe that despite the dementia and Alzheimer’s, she understood. Perhaps most importantly, I finally understood.These days, Carola can barely speak, but my mother tells me that whenever she reminds her of where I am, her eyes still dance.I would give my last breath to give Carola just one extra minute of happiness in a world that so ruthlessly wronged her. A world which she still selflessly illuminated with her beautiful light, and in return only asked that I make sure that she, our family and the other six million lives never be forgotten.My life is now dedicated to her legacy – to our legacy – and it is very much a reckoning.Carola’s fight is my fight. That is why I am here.
dan@jpost.com
Advertisement
Subscribe for our daily newsletter