The thrill of Thailand

Most locals say that the best time to visit Thailand is between November and February when the northeast monsoon blows cool, dry air that serves as a respite from the heat. 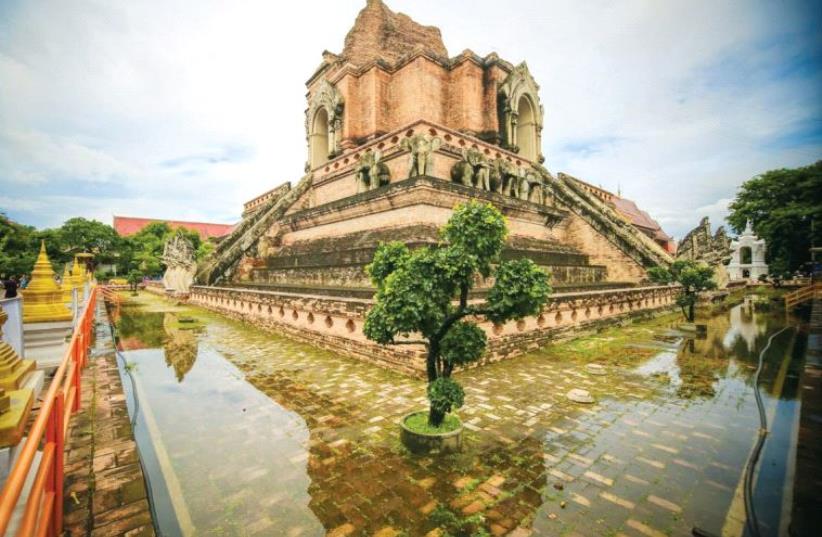 Wat Chedi Luang, a 14th-century Buddhist temple located in the old city of Chiang Mai
(photo credit: GUY YECHIELY)
Advertisement
Having grown up watching movies like The King and I and listening to songs like “One Night in Bangkok,” the thought of going to Thailand always seemed like an exotic and distant dream. However, that dream was realized recently when I set off as part of a nine-member group of Israeli journalists to explore the country’s exciting tapestry of people and places. The eight-day press trip was sponsored by the Tourism Authority of Thailand (TAT) in Israel together with Nok Air and was led by the knowledgeable Sharon Toval who, together with his partner Dov Kalmann, represents TAT in Israel.Thailand is the destination of choice for the nearly 150,000 Israelis who travel there each year. Some are enticed by the Southeast Asian cuisine and idyllic island getaways, while others are drawn to the bustling modern cities and affordable shopping. The shekel is strong in Thailand; NIS 1 is worth almost 10 baht. Although Thailand has become more expensive over the past few years, the cost of living is still much lower than in Israel.With this in mind, we flew from Amman to Bangkok’s Suvarnabhumi Airport (approximately nine hours). Our adventure truly began when we boarded a second plane in Bangkok for Thailand’s northern capital, Chiang Mai, known as the “Rose of the North.”Nestled amid green hills and expansive mist-covered forests, Chiang Mai offers visitors a wondrous array of historic, cultural and geographic experiences with ancient temples, national parks, waterfalls and mountain trails.Founded in 1296, it was once the capital of the early Lanna Kingdom, and much of its charm derives from that period.Our base in Chiang Mai was the Siripanna Villa Resort & Spa. From the moment we stepped into the lobby, we knew we were in for a special stay. The Siripanna is a beautifully designed hotel in the classic Lanna tradition. It is set in several acres of lush greenery, with a unique moat-style swimming pool. The guest rooms continue the Lanna theme with hardwood floors, huge beds and tasteful ethnic furnishings. The hotel is located in a quiet, semi-rural area of Chiang Mai but is just a 10-minute drive from downtown.The hotel offers complimentary shuttles to Chang Mai’s famous night bazaar.Chiang Mai’s famous night market and bazaar (photo credit: GUY YECHIELY)Endless stalls line the streets, offering everything from jewelry and clothing to local handicrafts and souvenirs. Bargaining is a must, and you can often pay 50% of the first offer. The market also includes a wide variety of food vendors who sell traditional Thai dishes, fresh fruit and vegetables and Eastern desserts such as sticky rice, mango mousse and exotic candies.Tired from our travels and with so many massage options literally at our feet, our group opted for the 45-minute foot massage at the Let’s Relax Spa.Slightly more expensive than the street massage places (450 baht compared to 200/250), this spa had a tranquil, relaxing atmosphere. For an authentic Thai transportation experience, we took a tuk-tuk to return to the hotel, a threewheeled motorbike with a bench that can seat up to six people.The following day, choosing from the wide variety of excursions available, we decided to spend the afternoon in Chiang Mai’s Old City. I marveled at the magnificent ancient Buddhist temples, called wats in Thai, also getting my first taste of the classic Thai dessert (and my new addiction) mango with sticky rice topped with coconut milk.We took a 30-minute drive outside the city to the Tao Garden Health Spa & Resort.With 50 acres of lush grounds with bonsai trees and lotus ponds laden with lily pads, it is the ideal retreat for anyone interested in wellness and relaxation.But for me, the day trip with the most impact was our visit to the Lanna Kingdom Elephant Sanctuary. This safe haven for abused, neglected or orphaned Asian elephants was created to protect the elephants and educate the visitors. 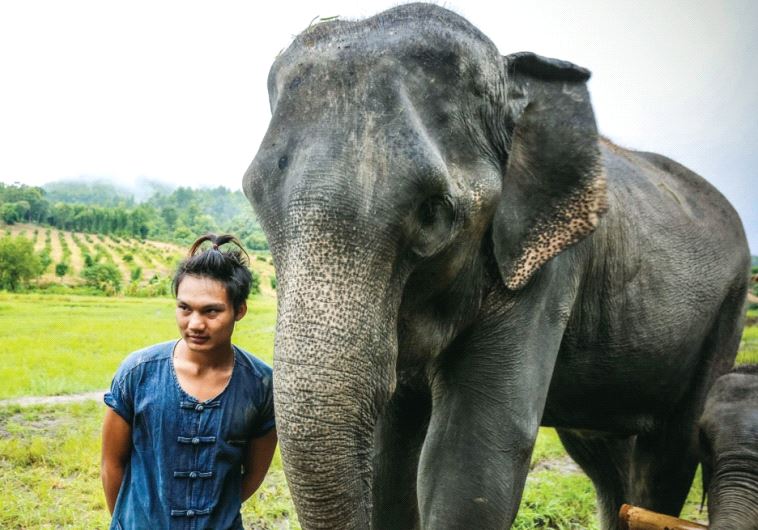 A mahout posing with his elephants at the Lanna Kingdom Elephant Sanctuary in Chiang Mai (photo credit: GUY YECHIELY)When we were not exploring the city with our bespoke Take Me Tour (www.takemetour.com), which is Thailand’s largest online marketplace for local tours, we lounged by the hotel pool, enjoying the tropical weather. The sporadic rainfall, typical during monsoon season (June through October), brought temporary relief from the humidity.Most locals say that the best time to visit Thailand is between November and February when the northeast monsoon blows cool, dry air that serves as a respite from the heat.After two wonderful days in Chiang Mai, we took a one-hour train ride to Lampang. The train was a great way to interact with locals, and the scenic route with hilly landscapes and lush rice fields with farmers plowing their paddies made me feel like I had been transported centuries back in time. When we arrived in Lampang, we were treated to a carriage ride around the historic town.It is the only town in Thailand that still uses horse and carriage as a means of transportation. From Lampang, we boarded a Nok Air flight to Bangkok.Experiencing Bangkok for the first time is a veritable assault on the senses. With a population of more than eight million, it is easy to be overwhelmed by the sheer size and constant cacophony of the city. 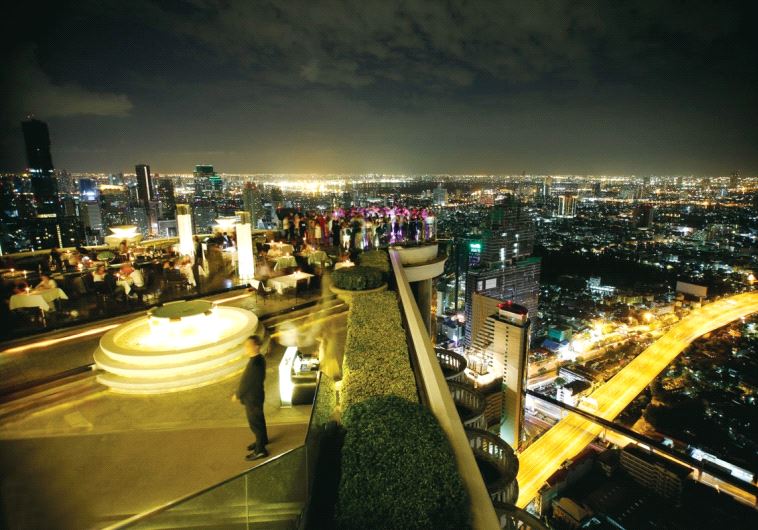 The Sky Bar rooftop offers panoramic views of the Bangkok skyline at night (photo credit: GUY YECHIELY)Bangkok is a city of contrasts – ancient gold temples and shrines stand proudly alongside towering skyscrapers, luxury hotels and shopping centers. During the drive from the airport to our hotel, I was amazed by the endless stream of cars, motorbikes and tuk-tuks.As soon as we arrived at the St. Regis Bangkok, I truly felt as if I were being welcomed into someone’s home, as the staff was so warm and gracious. The St. Regis is lavishly yet tastefully designed with a mix of traditional Thai and modern Western elements. The location of the hotel is second to none. It is one of the few hotels in Bangkok with an unobstructed view of the city. My suite overlooked The Royal Bangkok Sports Club, where I could watch horse racing! The hotel has its own private entrance to the Skytrain for easy travel throughout the city (a day pass costs only about 160 baht).Our tour guide Yin brought us to Bangkok’s bustling Chinatown. Settled in the 1780s by Chinese merchants (predating the founding of the capital), Chinatown retains a large Chinese population that continues to practice its cultural traditions.The area is awash in color, with traditional Chinese herbal pharmacies and food stalls on every corner, and the overpowering aroma of various meats, seafood and coal-fired grills filled the air.It was there that I finally tried the notorious durian fruit for the first time.Known as the world’s most foul-smelling fruit, durian emits an odor like rotting meat. Due to its smell, which many find disagreeable, it is actually banned in some hotels, restaurants and other areas of the city. After summoning up much intestinal fortitude, I was able to push past the smell and take a bite.Many people are passionate about the taste, but for me one bite was enough… To find the best bargains in Bangkok, one has to shop where the locals do – at the MBK Mall. Consisting of eight floors packed with more than 2,500 shops that sell, well, everything, MBK is a shopper’s paradise. I found the sheer scale of the place a bit overwhelming and easily got lost among the maze of stalls. Nevertheless, I managed to buy some very inexpensive T-shirts and several souvenirs.From Bangkok, we traveled to the southern province of Surat Thani for some island-hopping. From the mainland, we took the two-hour ferry to Koh Phangan, where we were met by our Israeli guide, Sharon Kahati. He has been living on the island for eight years and is the creator of the online magazine Phanganist (https://phanganist.com), which highlights the nightlife that Koh Phangan has to offer. Famous for its allnight Full Moon parties, Koh Phangan (which means “sand bar” in Thai) is also the epitome of a paradise island, with its unspoiled jungle and tranquil beaches.We stayed at the Buri Beach Resort, located on Haad Rin Nai Beach. The resort is within walking distance of restaurants and the Full Moon party beach.The hotel is well suited for party-driven, price-conscious visitors. Rooms range from NIS 200 to NIS 500 a night.Our Koh Phangan excursion included a visit to the Than Sadet nature reserve – which boasts one of the quieter beaches on the island and a series of beautiful waterfalls – and a blissful afternoon at the Buri Rasa Beach Resort. We were treated to traditional Thai massages right on the beach. Against the backdrop of the lapping waves, it was a sheer delight.We spent our last night in Thailand back in Bangkok at The Rembrandt Hotel Bangkok, which offers reasonably priced, good-quality accommodation in the main commercial and shopping district. On the hotel’s 26th floor is one of the city’s finest Indian restaurants, the Rang Mahal.The final, perhaps most important thing that makes Thailand such a wonderful place is its people – everyone was extremely courteous and helpful. No wonder it is called The Land of Smiles.The writer was a guest of Tourism Authority of Thailand in Israel and Nok Air.For more info on a Thailand visit www.thailand.org.il or www.facebook.com/ thailand.friends.org