The woman of the thousand voices

In an Arad hangar, artist Dorrit Yacoby’s legacy lives on after her death. 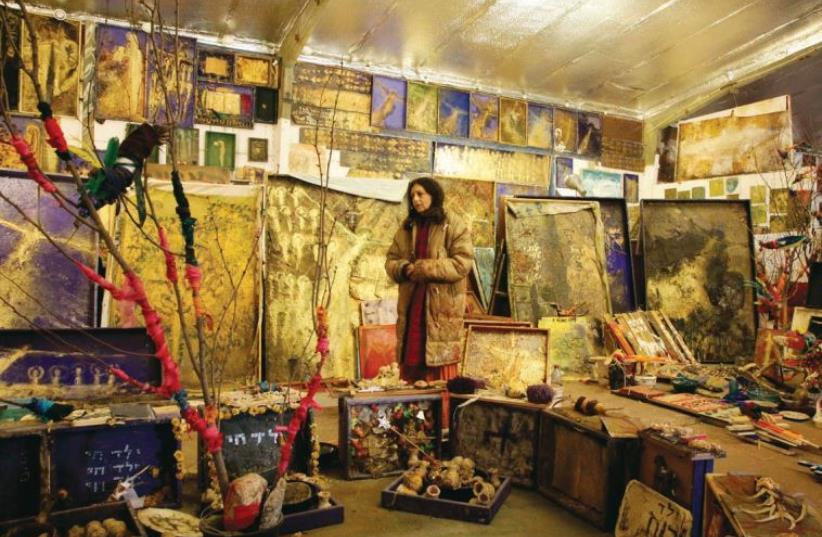 Dorrit Yacoby with her work in the Arad Hangar, in November 2010
(photo credit: AVRAHAM HAY)
Advertisement
Arad artist and poet Dorrit Yacoby died on November 6, 2015 at the age of 63. Working outside the mainstream of the local art world, she nevertheless garnered serious attention here and abroad for series upon series of monumental paintings and installations with a spiritual and mythical dimension.   This article is a tribute to her memory.The images and scenes she created were metaphors for her emotional turmoil.At first, they related to what she perceived as her own troubled existence, torn between domestic obligations as a wife and mother and an overpowering need to devote herself to her art. Later, her work would mirror her transition from feelings of grief and hopelessness to self-belief in her powers as a conduit, able to heal others through her art.A student of Jewish mysticism, Yacoby once compared the story of her life to the primeval journey taken by the Shechina – the Great Mother – a journey of wandering and exile that ended “with redemption, healing and a promise of solace.” 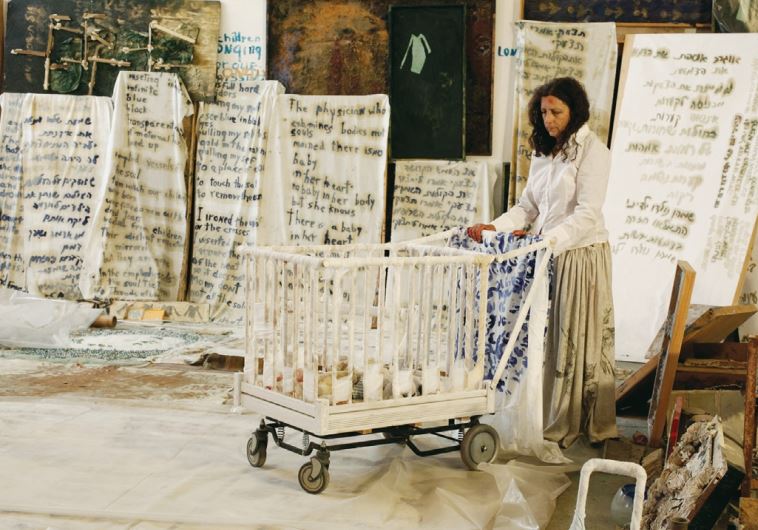 DORRIT YACOBY was born in 1952 in the Scottish Hospital on the shores of Lake Kinneret. Her childhood was spent with her parents and two brothers in Moshav Arbel in the Northern Galilee.Hilda, her Canadian-born mother, moved to Eretz Yisrael as an 18-yearold and married Avraham Ezekiel, an Iraqi-born Jew who worked for a time as a journalist for The Jerusalem Post. At the start of World War II, Ezekiel enlisted in the Jewish Brigade. After the war, together with his fellow soldiers, they founded the moshav where he brought his young wife to live.Yacoby attended the regional high school and then served in the army. She married Giora Yacoby, then a student of mechanical engineering at the Haifa Technion, in 1971. The couple lived in Haifa until her husband was offered a job with the Rotem mining company in the Negev. They set up a home, first in Beersheba and then in a quiet residential area in Arad.At first Yacoby viewed this move to the edge of the desert as a kind of death.Later she would change her mind: “I found that the emptiness and space gave me a new freedom, opening up a window inside me. I sensed God in the wind, the sand and the sun connecting me to my inner self.”In 1980, at the age of 28, with four young children at home, she was possessed by a tremendous urge to paint, never having taken up a brush before.Yacoby enrolled in the Visual Arts College in Beersheba and later studied at the Teachers’ Training College in Ramat Hasharon, staffed by some of the country’s leading artists, all of whom, at that time, were advocates of Conceptual Art – believing that the idea behind a work of art is more important than the finished product. Yacoby’s large, heavily worked paintings expressing her emotions came in for harsh criticism.This was a wretched time for her. She was censured not only by her teachers, but also by her family, who neither understood nor agreed with her sudden and total commitment to creating art.She once told me that she felt like one of the victims in Spanish painter Francisco Goya’s 1808 painting The Third of May – standing against a wall facing a rain of bullets.Even before she finished studying, Yacoby had perfected a ritualized process of working. On top of the boards that formed the matrix for her paintings, she bound, glued or stapled on “everything I could lay my hands on...bits of furniture I found in the industrial area of the city, scraps of ribbons and clothing from the local Beduin market, old photographs, torn pages from schoolbooks, shards of china and bits of jewelry.”After pouring tar over these objects, she would brush or pour on industrial oil paints. At this point the paintings were left to weather in her garden for up to five years before being reworked.Exposed for a long period to the extremes of the desert climate – intense cold, torrential rain and burning heat – the appearance of her paintings changed: colors faded and salt, sand, leaves and berries became attached to her paintings. The final effect was of archeological relics set in a rugged landscape. 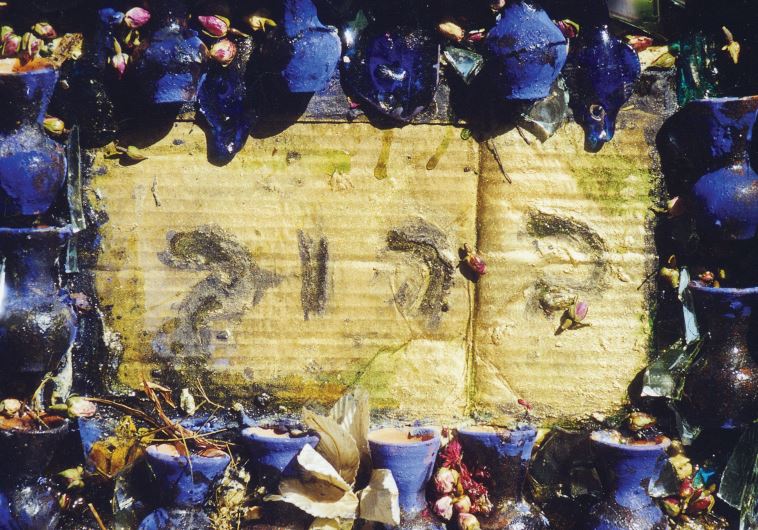 NEWLY GRADUATED from art school, Yacoby was one of 30 artists selected to show their work in “Art Israel, the 1980s” at the Mary Anne McCarthy gallery in New York. It was there that Susan Tumarkin Goodman, senior curator at the Jewish Museum in New York, spotted her paintings. Goodman was so impressed that on her next visit to Israel she persuaded Yigal Zalmona, chief curator of Israeli art at the Israel Museum, to accompany her to Arad to see Yacoby’s work. The result was a solo exhibition at the Israel Museum.In the catalogue text, Zalmona described Yacoby’s paintings as having “a hallucinatory and terrifying quality...the look of wounded, peeled skin...sometimes the light [in them] is the blinding, denuding whiteness of operating room lamps, sometimes it is a theatrical floodlight... It can also suggest the kind of spirituality that scatters the darkness into the depths of religious paintings inspired by Rembrandt.”Yacoby’s works made between 1987 and 1991 characterize her “dark years.”Completely obsessed by the act of painting, she disconnected herself from life outside the room in her home where she worked. Once, she told me that she did not actually abandon her family, but performed her household duties like an automaton, her four children referring to her as “that alien from outer space.”Increasingly during this period, the central image in her paintings was a shadowy stick-like figure of a woman: seemingly bowed down in pain, stretched out on an operating table, or carrying black urns, as in Woman Holding Pain and Chaos, 1988. In some instances, this figure appeared to be on the brink of vanishing altogether.After years of inhaling poisonous fumes from the materials she worked with in a closed environment, Yacoby’s lungs and blood were affected and she became ill. Ignoring the advice of doctors, she began to heal herself. She started to paint outdoors, using only water-based paints and enamel – rather than varnishes – to seal her paintings.IN 1992, at the start of the Gulf War and when her husband and oldest son were both on active duty, Yacoby’s art took a turn. It became a kind of prayer for her loved ones and the young people serving.Her exhibition “War Signals” traveled to Canada and Germany, showing images of destruction, but also “magic” boxes, some made of cement, that she placed together so that they would form a symbolic wall, protecting the sons of mothers everywhere. There were also hand-held amulets, one of which incorporated bootlaces and an army identity tag belonging to her son.Shortly afterwards, the content of Yacoby’s paintings changed, no longer acting as a graveyard for family relics.Her central image was now a flying woman, arms outstretched. Following a visit to Istanbul, where she was captivated by the brilliant colors and ornamented mosques and Byzantine mosaics, Yacoby developed a brighter palette, using blues, greens and gold to give her imagery an otherworldly appearance.Yacoby was increasingly invited to show her work abroad. Among her major shows was “Vessels of the Soul” (1996), shown in Beijing, China and Kobe, Japan, a year after an earthquake struck that city. Speaking at the opening, the gallery owner spoke of Yacoby’s paintings as “blessings” with the power to “remove the curse, illuminate and heal the wounded heart.”Another painting series, “The Secret Rose Garden of the Angels” (1998) – an imaginary place of rest and redemption – was received in quite another way at the Museo del Chopo in Mexico City.Schoolchildren visiting the museum on the National Day of the Dead mistook her presentation for an ancestral shrine and placed offerings of toys and flowers in front of it.In 2001, Yacoby was invited to mount an exhibition at the Vatican called “The Path of Illuminated Hearts: Gate of Tears, Rain of Roses.” The phrase “Gate of Tears” derived from a kabbalistic belief that the Messiah will first appear in Rome, where the spoils from the destruction of the Second Temple were carried off by the Emperor Titus.In the center of the hall, Yacoby placed a long table, crowding it with lighted candles, magic boxes filled with texts and small objects, and roses set in vases of blue Hebron glass. Hung around the walls were 20 of her paintings, many with the central image of a radiant flying woman.In the text she wrote for the catalogue, Yacoby explained the artistic and spiritual journey she had taken over the years: “From darkness to light, from ephemerality to eternity, from earth to heaven, from matter to spirit, from disintegrating chaos space to a golden expanding one, from a broken, burnt form to an illuminated figure with a mantle of grace.” 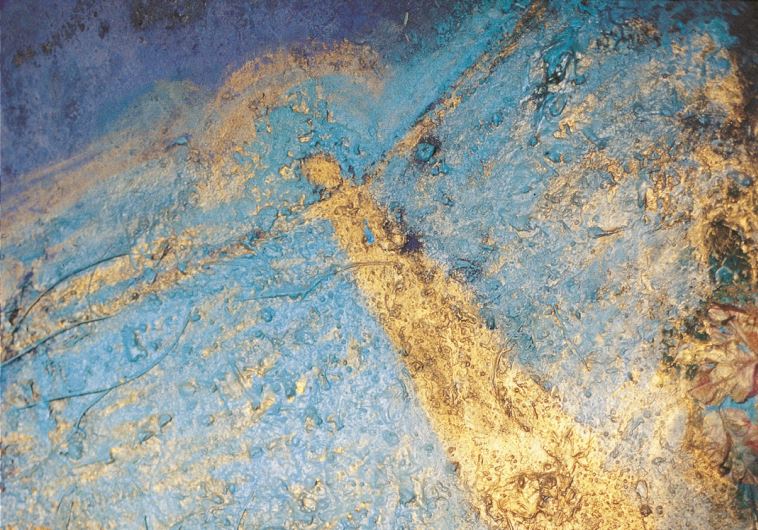 IN THE hangar in Arad’s industrial zone, “The Center for Art and Creation – The Women of the Thousand Voices,” is an exhibit of scores of Yacoby’s paintings, hanging on the walls of or stacked high on the floor, together with her magic boxes and large, festively decorated constructions, resembling altars. Poems by Yacoby are scrawled on strips of linen.By means of pathways set out between the exhibits, one can travel through the stages of her artistic voyage, with its themes of death, life and rebirth.Breaking the silence in this place are the sounds of liturgical music or a recording of the soft voices of Yacoby’s parents reading her poetry.It was in Arad during the period of the second intifada and the Second Lebanon War that Yacoby dressed in white and sprinkled salt – a metaphor for tears – on children’s empty cots. In this ritualistic performance of mourning and purification called The Land of the Dead, Yacoby had evolved from creating art from her own sadness, to seeing herself as the mother of every fallen soldier, a shaman expressing – through her art – the terrible pain felt by bereaved families.Devoid of an audience, Yacoby’s youngest son, Amram, documented the performance for his film “Woman of the Thousand Voices.”Artist and educator Prof. Haim Maor has described the art of Dorit Yacoby housed in this Hangar as a national treasure. It is to be hoped that cultural department of Arad municipality will honor it as such, and find a way to keep the place open, and professionally staffed.  So that, Yacoby’s art, in this magical grotto, will continue to offer visitors a rare transcendental experience.