From our archives: Israel's shadow diplomat - Who is Yitzhak Molcho? 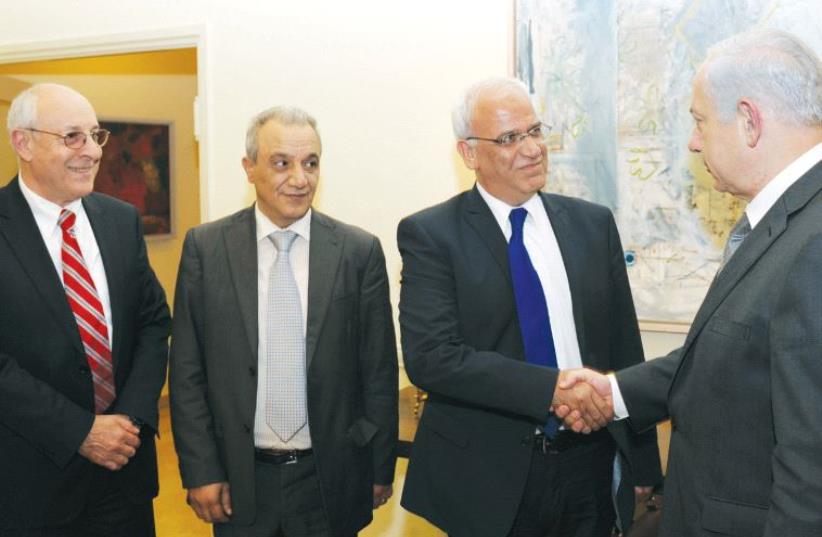 Netanyahu shakes hands with member of the Palestinian Parliament Dr. Saeb Erekat in Jerusalem in April 2012. On the far left side, is Attorney Yitzhak Molcho
(photo credit: GPO)
Advertisement
Yitzhak Molcho, considered Prime Minister Benjamin Netanyahu's right hand man and his liaison for the most sensitive issues has been named as a suspect in the police's probe into Case 3000. Molcho is suspected of breach of trust violations for allegedly using his clout with Netanyahu to benefit his business partner and another suspect in the case, Netanyahu's lawyer David Shimron. The following is a profile written earlier this year offering a glimpse into the prime minister's man in the shadows.It was an extremely significant diplomatic visit that seemingly came out of nowhere, Egyptian Foreign Minister Sameh Shoukry’s unannounced trip to Jerusalem on Sunday, July 10.It was the highest-level visit by an Egyptian official in almost a decade; it signified that Cairo was willing to move its increasingly strong relationship with Israel from the storeroom to the front shelf; and it indicated something stirring in the diplomatic process behind the scenes.The secrecy that veiled Shoukry’s visit until the very day he arrived had one man’s fingerprints all over it: Yitzhak (Itzik) Molcho, Prime Minister Benjamin Netanyahu’s special envoy dealing with the Palestinian diplomatic track.Indeed, as Netanyahu and Shoukry wrapped up brief, public comments to the press before the meeting began, Netanyahu gave Molcho a shout out.
Prime Minister Benjamin Netanyahu welcomes Egyptian Foreign Minister Sameh Shoukry in Israel on July 10 (Marc Israel Sellem)
“Before we go upstairs, I want to thank my trusted special adviser and personal envoy Yitzhak Molcho for all that he does to strengthen Israeli-Egyptian relations, and for his work in preparing today’s important meeting. Thank you, Itzik. I think he’s still moving from the airport, but he’ll get here.”Of course, Molcho got there and participated in the meeting, which he had a major role in bringing to fruition. Indeed, Molcho has been “there” – at Netanyahu’s side and in the thick of diplomatic activities with the Palestinians and the Arab states – when Netanyahu took power the first time in 1996, and since he won the elections again in 2009.But unlike others who over the years have had a role in advising, influencing, shaping and carrying out Netanyahu’s foreign policies – people like Uzi Arad, Dore Gold, Yaakov Amidror and Ron Dermer – Molcho is largely unknown to the public.His name is heard every once in a while on the radio, but unlike the others, he could walk into a restaurant in a place like Ashdod and almost no one would turn their head or elbow their companion to take a look.Who is Molcho? Why does Netanyahu trust him so much? And how did this Jerusalem corporate and commercial lawyer become the person in the driver’s seat managing Israel’s critical relations with the Palestinians, Egypt and Jordan? He is arguably Netanyahu’s closest and most trusted adviser, yet his face is pretty much unknown; his voice is never heard on the radio; he doesn’t do the conference circuit; and even though he has been intimately involved in the Palestinian track since 1996, nary a substantive, policy-orientated interview with him has been conducted.This, indeed, is one of the main criticisms leveled against him. Here is a man with an enormous amount of influence on the prime minister, who leads negotiations on extremely sensitive issues that will have a huge impact on the security of the nation, yet he works entirely in the shadows. Deep, deep in the shadows. The public does not know what he thinks, and it is difficult to conjecture what advice he is giving the prime minister.Because of lawyer-client confidentiality, the public also doesn’t know the nature of Molcho’s business dealings. Together with David Shimron, Molcho runs a large Jerusalem law firm that has many clients in Israel and around the world. He has also been the Israel-based honorary consul to Austria for the last 35 years, a role that gives at least the appearance of a potential conflict of interest, though people close to Molcho maintain it is a “joke” to think there would be any conflict between that position and his dealings on the Palestinian issue. 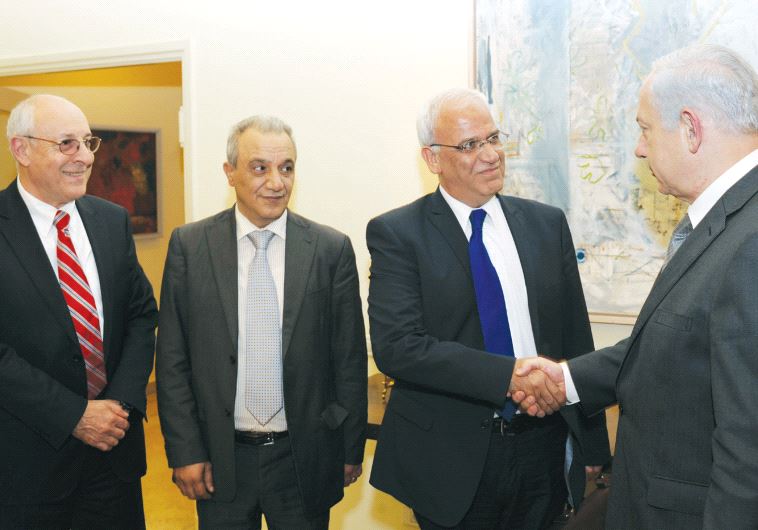 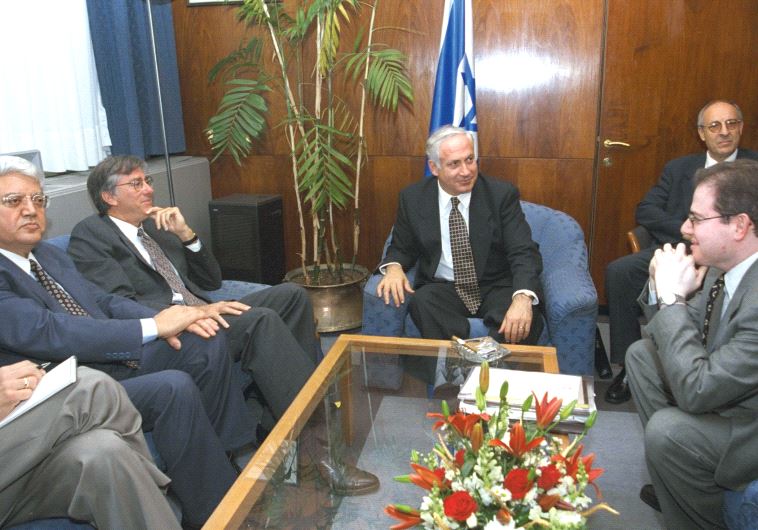 In October 1997, Netanyahu is seen meeting with US Envoy Dennis Ross, foreign minister David Levy (left), government secretary Danny Naveh (right) and Molcho. (Amos Ben Gershom/GPO)
"He believes in a two-state solution.“The more space you give him, the more results you get,” Herzog continued. “I think the problem is that he has been acting in a very narrow political space, because of the nature of this coalition. That is his space.”As space with the Palestinians narrows, Molcho is playing a greater role these days in building Israel’s relations with its Arab neighbors, as the Shoukry visit indicated.“The unprecedented relations we have these days with Egypt, and some of the other Arab states, is also to his credit,” Herzog said.The overtures with the Arab world are motivated not only by a confluence of interest with countries like Egypt, Jordan, Saudi Arabia and the UAE on issues such as Iran and Islamic extremism, but also an understanding that in the current situation, where Abbas has pretty much lost his constituency, it is unrealistic to think that in the foreseeable future he can make the necessary decisions to lead to a breakthrough.So instead of focusing efforts on an unrealistic breakthrough, efforts being led now by Molcho are aimed at preparing the way for a future where those decisions might be made. The animating idea is to look for ways to open a window to the moderate Arab countries that Abbas wants to be affiliated with, and get them involved in the Palestinian issue, so that Abbas will not have to be the one to take difficult decisions he does not have the political power to make. That idea helps explain Shoukry’s visit.Ross, when presented with the argument that Molcho must not be too effective since things are so stymied, added another obvious element: “The Palestinians are a player in this as well,” he said. “In this part of the world you don’t have a lot of people who you can point to their success, so I would take that criticism with a grain of salt.”Even Molcho’s critics agree that one thing he is very adept at is troubleshooting.A recent example is the report published this month by the Middle East Quartet – the US, Russia, EU and UN – on the reasons for the diplomatic logjam. For weeks there were reports that the document would relentlessly slam Israel for settlement construction. In the end, a rather mild document emerged that did criticize Israel’s settlement policies, but not before slamming the Palestinians for violence and incitement. Molcho, diplomatic officials said, had a strong hand in moderating the tone of that paper.What one sees in diplomacy, an old saying goes, is only the tip of the iceberg. Much takes place underneath the water that is unseen, and much of what takes place underneath the water is trying to keep certain things from rising to the surface.Molcho, his confidants say, continues to have regular dialogue with Palestinian Authority officials when needed, and – a result of having dealt with the issues for so long – has access to everyone he needs to speak to.The discussions he holds now are less on ways to create a breakthrough, and more on how to create a modicum of stability in an area where stability is not exactly a byword these days.But even at a time when true diplomatic progress is unexpected, Israel needs to keep up a dialogue with its neighbors and the Palestinians over the Palestinian issue, one of Molcho’s close associates said. And Molcho’s overriding philosophy, he added, is that dialogue must be maintained under all conditions for one simple reason: “In this region if you don’t talk, you shoot.”