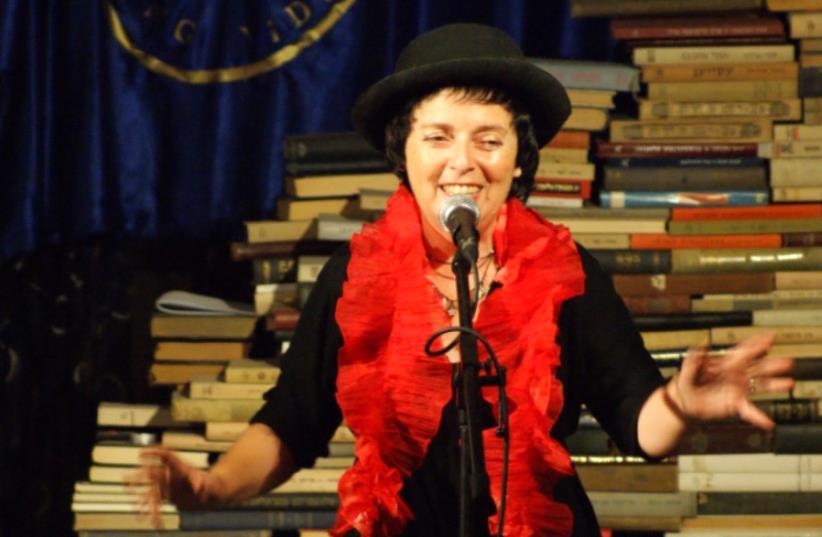 Polina Belilovsky
(photo credit: WWW.EN.POLID.OMANIM.ORG)
Advertisement
■ IT WOULD be difficult to find many places these days where one could attend a concert for the price of only NIS 10. However, this is available to lovers of Yiddish song who are happy to attend a Friday morning concert. The venue is Beit Leyvik, 30 Dov Hoz Street, Tel Aviv, and the singer is Polina Belilovsky, who will present 10 Yiddish songs, beginning at 11 a.m. on March 24.Belilovsky is well known to patrons of Yung Yidish in the cultural hub of the Tel Aviv Central Bus Station, where she usually performs at night and sings with Yung Yidish founder Mendy Cahan. At Beit Leyvik, it will be a daytime delight, and she will be singing solo. She has also sung in Kiryat Gat at the Yiddish lovers club, known most appropriately as Mama Loshen, and at other venues throughout Israel.
■ ISRAEL’S LONGEST-SERVING community rabbi, Yaakov Edelstein, who was the chief rabbi of Ramat Hasharon, died last week at the age of 93. The huge funeral procession went from Netanya to Bnei Brak to Ramat Hasharon. Eulogies were delivered by the rabbi of Sanz in Netanya, then in Bnei Brak by one of Edelstein’s sons, Rabbi Mordechai Edelstein, and the deceased’s older brother Rabbi Gershon Edelstein, who is the head of the Ponevezh Yeshiva, as well as other rabbis.Edelstein and his brother were in the founding group of students at the Ponevezh Yeshiva in Bnei Brak. They had come from Europe as youths with their parents.The family settled in Ramat Hasharon, where Yaakov Edelstein became rabbi in 1950, succeeding his late father, Rabbi Zvi Yehuda Edelstein, in the post.Together with his uncle, Rabbi Binyamin Movshowitz, who was the chief rabbi of Herzliya, Edelstein established the first yeshiva in Ramat Hasharon. He later held concurrent positions in Bnei Brak.He was a great authority on Halacha, and people came from all over the country to consult with him. He was also known for helping the needy.He is survived by his wife, several sons and daughters and numerous grandchildren and great-grandchildren.
■ ON SUNDAY evening of this week, President Reuven Rivlin participated in the annual Larger Than Life gala on behalf of children with cancer and their families. At the crowded event at Tel Aviv’s Charles Bronfman Auditorium, Rivlin said that it was an evening of optimism.Cancer is a cruel and difficult disease, from which no one is immune and for which there is no age limit, he said. From the moment it is diagnosed, the ground begins to shake beneath our feet. Later, there is the struggle, the moments of tension and despair, the physical hardships, the surgeries and the treatments, the almost imperceptible changing of the regularity of the home, the fear.All these things are tough at any age, he said, but more so when applied to our children. As parents and grandparents, we stand helplessly by when they are ill and we can do nothing for them. It paralyzes us, even though we have to summon all our strength in order to be there for them. “We have to gather all our hopes, in order to preserve their hope and optimism. It is the most difficult thing to do when the heart is breaking,” he said, as he addressed the many parents in the hall.Rivlin praised the parents for the fortitude and strength they were able to muster. He also praised the organizers of Larger Than Life who do so much to improve the quality of life of the children and to ease the burden on their families.Larger Than Life also helps to make the wishes of the sick children come true. For one of three kids who came on stage to meet the president that evening, that’s what happened. Ilai Tal, seven, who suffers from leukemia, had wanted to meet the president – and he got his wish. Gefen Bar-On, 10, has been battling cancer for 18 months, and Shira Shem Tov, who celebrated her eighth birthday the following day, has been sick with cancer for three-and-a-half years.Rivlin has grandchildren in the same age bracket, and it was not easy for him emotionally, but the children were all smiles, so he put on a brave face and smiled as well, giving them a broad grin of hope.The emcees for the evening were husband and wife entertainers Guy Zoaretz and Yael Bar-Zohar, who frequently appear at events designed to help children who are ill or who have special needs.