Is Hamas planning to take over the West Bank? - analysis

According to some reports, the PA security forces seized large amounts of weapons and explosives in the town of Beitunia, southwest of Ramallah, that belonged to a Hamas cell.

Hamas is planning to stage a non-violent coup against the Palestinian Authority by taking control of universities, unions and other institutions in the West Bank, Tawfik Tirawi, former head of the PA General Intelligence Service, has warned.

The warning followed Hamas’s victory in the recent election for student council at Bir Zeit University, north of Ramallah, and in some professional unions.

“Hamas ... is planning to carry out a smooth coup [against the PA] in the West Bank.”

It also followed claims that several Hamas members from the Ramallah area had planned to carry out attacks against key PA security and civilian installations.

According to some reports, the PA security forces seized large amounts of weapons and explosives in the town of Beitunia, southwest of Ramallah, that belonged to a Hamas cell. 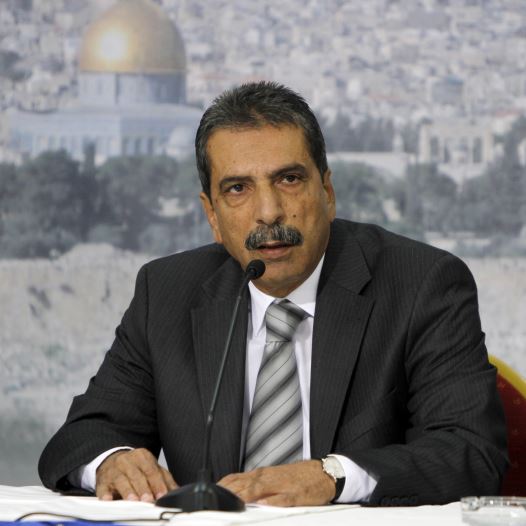 Tawfiq Tirawi speaks during a news conference in the West Bank city of Ramallah (credit: REUTERS)

Hamas has denied any connection to the weapons.

A senior Palestinian official told The Jerusalem Post that the PA has briefed Egypt and other Arab and foreign parties about Hamas’s alleged coup.

Tirawi expressed “regret” that some Palestinians are assisting Hamas in its effort to extend control beyond the Gaza Strip.

“Unfortunately, Hamas is working with some brothers from the PLO and other Palestinian factions, whom I respect,” said Tirawi, a member of the Fatah Central Committee, the ruling faction’s decision-making body headed by PA President Mahmoud Abbas. “They want to take control of the universities, unions, syndicates and municipal councils [in the West Bank]. They want to control all the Palestinian institutions.”

Tirawi said that once Hamas takes control of these bodies through elections, it will be hard to argue that the takeover was not legitimate.

“No one would be able to argue that they are illegitimate, not the Americans or the Arabs or the Palestinians, because Hamas came [to power] through elections,” he said. “After Hamas takes over these institutions, they will initiate strikes and disrupt normal life. They will bring about the collapse of any [PA] government.”

Recently, the Hamas-affiliated Islamic Bloc list scored a landslide victory in the Bir Zeit University student council election. The victory was seen as a humiliating defeat for Fatah.

“Hamas is making a big effort to seize control of many Palestinian institutions in the West Bank, and so far it appears that these efforts have been successful.”

Tirawi was assigned to head a special commission to study the reasons behind Fatah’s defeat. He said that he found “15 mistakes” that were committed by Fatah, but did not elaborate. “If we tackle the 15 mistakes, the [Fatah-affiliated] Shabiba list will win the next election,” he added.

Earlier this year, Fatah lost the student council election at Bethlehem University to the PLO’s Marxist Popular Front for the Liberation of Palestine (PFLP).

Supporters of Hamas and the PFLP have also defeated Fatah in elections for the syndicates and unions of Palestinian pharmacists, physicians and engineers. Several Hamas-backed “independent” candidates have won in the last municipal election as well, though boycotted by Hamas.

An-Najah University’s administration was later forced to backtrack on its decision to expel 10 Hamas-affiliated students who were accused of initiating the violence.

“Hamas is making a big effort to seize control of many Palestinian institutions in the West Bank, and so far it appears that these efforts have been successful,” said a veteran Fatah official who previously served as a minister in the PA government. “Hamas is winning the hearts and minds of the people in the West Bank who have lost confidence in the Palestinian Authority leadership.”

He said that in addition to its increased popularity among the Palestinians, Hamas was benefiting from the ongoing schism and bickering within Abbas’s Fatah.

Hamas' rise in Gaza and the PA

The renewed talk about Hamas’s ostensible scheme to stage a coup in the West Bank is yet another sign of the continuing tension between the Islamist movement and Fatah.

Tension reached its peak on June 15, 2007, when Hamas seized control of the Gaza Strip after toppling the PA. Since then, several attempts by Arab and Islamic countries to end the rivalry between the two parties have been unsuccessful.

Earlier this week, Abbas and Hamas leader Ismail Haniyeh briefly met in Algeria during the country’s Independence Day celebration. Palestinian sources ruled out the possibility that the encounter, the first of its kind in six years, would lead to reconciliation between Fatah and Hamas.

Hamas officials, meanwhile, have strongly criticized the PA security forces for pursuing their crackdown on the group’s supporters in the West Bank. They said that scores of Hamas supporters were arrested in the past few weeks by the PA security forces, as part of a plan to “silence and intimidate” critics and political opponents of the Ramallah-based Palestinian leadership.