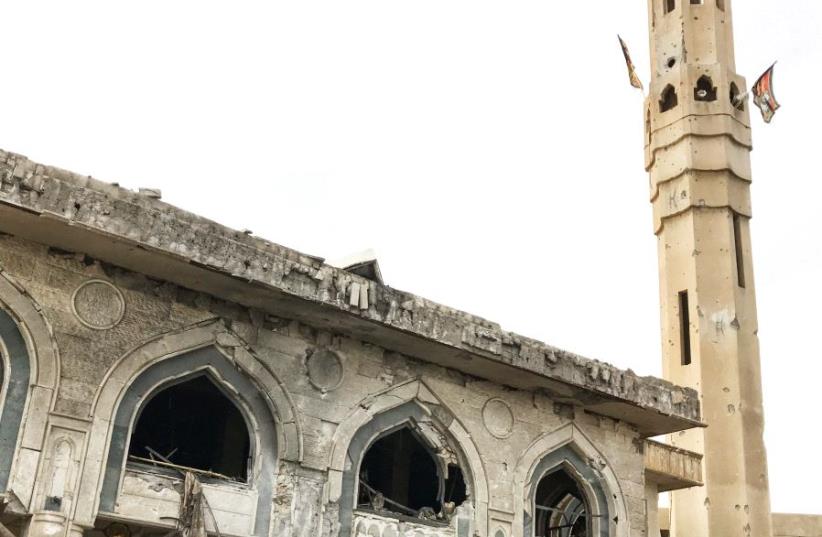 Shia militia flags hang from a mosque in Mosul
(photo credit: SETH J. FRANTZMAN)
Advertisement
NIMRUD, Iraq – The floating bridge that spans the Tigris River south of Mosul was built after Iraqi security forces cleared Islamic State terrorists from the area last year. Today it has a checkpoint at each end run by the Iraqi Army. But attached to the bridge is a large flag with the image of the Shia Imam Hussein (626–680 CE), a reference to the grandson of the Prophet Muhammad, who was killed in the Battle of Karbala. A sword infused with religious imagery dripping in blood hangs below him, symbolizing both martyrdom and retribution.When the Mosul offensive began last October, Qais al-Khazali, a leader of the Asaib Ahl al-Haq Shia militia, promised that the battle against the black flag of ISIS would echo the ancient martyrdom that led to the creation of Shia Islam. But things would go differently this time. Hussein would triumph and the Sunni extremists with their black flag would be sent to their graves. For many Shia this is a just revenge, similar to the Soviets raising the Red Banner over the Reichstag in 1945. ISIS carried out unspeakable crimes against Shia at places such as Camp Speicher in Tikrit in 2014. It cleansed them from areas under its control.
Shia militia flags at a checkpoint near Mosul. Credit: Seth J. Frantzman
Destruction in Mosul , Iraq amid the fight against ISIS in April 2017 (SETH J. FRANTZMAN)
A few months ago someone circulated a meme on Facebook showing Eddard Stark from Game of Thrones holding the Ya-Hussein flag that the militias often adorn their checkpoints and vehicles with. “Winter is coming,” said the meme. The media was comical but not the message: There is a new power growing in Iraq. The sword of the Shia militias has been drawn and it shall not be sheathed.Driving from Erbil in the Kurdish region to West Mosul today requires traversing at least 10 checkpoints, many of them manned by local Shia militias affiliated with the Hashd al-Shaabi or Popular Mobilization Units (PMU).They aren’t all Shia or Arab; there is an Assyrian Christian affiliate, Shia Turkmen, Sunni tribes, and other minorities such as the Shabak have their own “Hashd.” But the vast majority are Shia and the Shia flags symbolize the militias’ power and religious affiliation.The PMU is made up of various large militias including Kata’ib Hezbollah, the Badr Organization and the Imam Ali Battalions.Since last year they have been incorporated officially into the security apparatus of the Iraqi state. This is a reminder of how the Iranian Revolutionary Guard Corps functions. It is also how Hezbollah has come to dominate politics in Lebanon. The recipe is the same: First, create a political party. Then create a religious militia to go with it.Then get the government to recognize and accept the militia as part of the “defensive” forces of the state. In Iran this started with the 1979 revolution.In Lebanon it began after the Israeli invasion in 1982 and has grown incrementally since 2006.ISIS has fueled the power of Hezbollah, allowing it to pretend it is protecting Lebanon from Islamist extremists and extend its power into Syria.In Iraq the Shia militia origins may date to the 1980s, but their current power derives in large part from the war on ISIS that began in June 2014.When the Iraqi Army disintegrated, they stepped into the breach. Grand Ayatollah Ali al-Sistani issued a fatwa calling on Iraqi citizens to defend the country from ISIS. Hundreds of thousands flocked to the flag over the next twoand- a-half years. Now that tide of men and arms has reached Mosul.Locals claim the Shia militias are abusing people who flee Mosul, accusing them of being members of ISIS. I tried to enter the Hamam al-Alil displaced persons camp just south of Mosul and was turned away brusquely by the militias.Later we were told there had been an “incident” in the camp whose entrance is controlled by the PMU but whose residents are Sunni Arabs. The PMU have even posted a giant sign declaring that they are “confirming the safty [sic]” of the camps, giving aid “equally.”They specify no “shooting in the air for any reason.”Hundreds of thousands have fled Mosul for camps like this.Some are run by the UNHCR, but the militias play an outsized role on the roads leading to them.One teenager from a village occupied by the militias who fled to the Kurdish region says he despises Iran, which supports the militias. He opposes the Shia who he says have no place in northern Iraq. He claims they are handing out Hussein flags and Shia religious books to children, trying to convert them. His sentiments are shared by almost every Sunni I spoke to, including Kurds and Arabs who see an Iranian hand planting itself firmly around Mosul. Some locals say there is no difference between the religious extremism of ISIS and the militias. If those sentiments are even partially representative, it is only a matter of time before a new round of violence breaks out. If ISIS gave the militias an excuse to expand their power to Mosul, a historically Sunni city, attacks on Shia symbols may only increase their power as they portray themselves as cracking down on Sunni Islamist terrorism.