A refuge for Syrians in Berlin

Along Karl-Marx-Straße, deep in southeast Berlin, an abandoned shopping mall has found a new life housing refugees from wars across the Arab world. 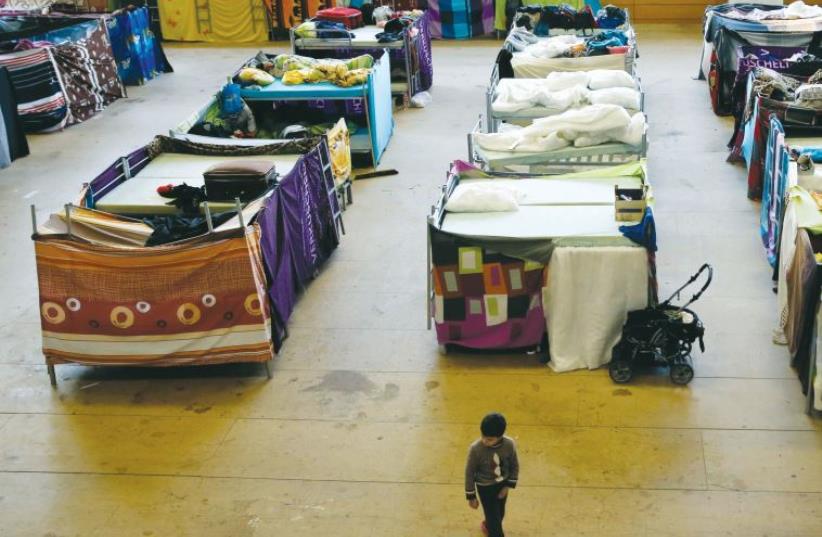 A CHILD walks in front of beds set up inside the Jane- Addams high school in Berlin’s Hohenschoenhausen district.
(photo credit: REUTERS)
Advertisement
BERLIN – The district of Neukölln, something of an upcoming Brooklyn of Berlin, is proudly sprouting modish cocktail bars and fashionably slow-paced cafes. People with manicured beards and tattooed thighs stride down these unspectacular streets, bike past tasteful bridges over the Spree canal, and take tea under chic lighting and local art at all hours.They dance under an artfully distorted disco ball in hotpink Silver Future, a gay bar in the neighborhood, sporting a prominent sign in the window: “Refugees Welcome.”This borough of southeast Berlin also hosts the largest concentration of immigrants in all of Germany, and in the past year has become home to hundreds of refugees from Syria’s civil war– the lucky few who have secured passage far north into Europe.Some who have proper documentation choose to settle in these parts. But along Karl- Marx-Strasse, the neighborhood’s main thoroughfare, an abandoned shopping mall has found new life housing migrants from across the Arab world, who wait here for government registration and freedom of movement.Several buildings have been repurposed for refugees throughout Berlin, but this particular refuge opened at the beginning of the year housing 200 young Syrian, Iraqi and Afghani men. In just six months, it has filled to capacity, with 600 crammed into the five-story old building wired with Internet and packed with bunk beds.Security around the building is tight, but the supervised residents are allowed to stroll outside for a smoke. One Syrian refugee, Rashid Muhammad from Syria’s Aleppo, said he arrived in Berlin 14 months ago and is still hopeful he’ll iron out his paperwork.In the meantime, he is happily participating in several integration programs that are brought to refugees on site, including language and job training.Should Muhammad leave the mall for a proper apartment, he may choose to stay in Neukölln, where hipsters live alongside the city’s largest Lebanese population. The dissonance of the two communities here reflects an ongoing conversation within Germany over the importance of integrating foreign-born Muslims – and yet this neighborhood seems to have figured it out, as every evening, women in hijabs walk past quaint watering holes.“Maybe they come and I just don’t recognize them, but I don’t believe they are our customers,” said the manager of Cafeggiano, an Italian cafe. Several restaurant and bar managers in the neighborhood shared similar perspectives, but all noted their openness to the settlement of refugees here.The influx has “been great for business,” said Hamadi, owner of a store for traditional Muslim dress called Al-Amira.Lebanese herself, Hamadi has run the business with her husband for 15 years.“This community is 50 years old,” she added, referring to the Lebanese presence. “They are a welcome part of it.”Last year, more than 1.1 million refugees entered Germany fleeing wars in the Middle East – more than any other nation, and with relatively few political costs to the government compared to other sympathetic capitals throughout the rest of Europe. “Mummy” Angela Merkel, as the country’s chancellor is known, has since slowed the country’s intake after enjoying wide praise and criticism for initially opening Germany’s gates.Merkel’s government has long said that Germany, a country of 80 million, can absorb the historic migrant flow – the largest in Europe since World War II. But that was last year. Europe’s leaders are now in agreement that the continent will react adversely to an additional wave of arrivals.That is the feared outcome if diplomacy over ending the Syrian civil war breaks down completely, and if a cease-fire holding the war from devolving falls apart with it. More than 30,000 former residents of Aleppo have fled to Syria’s border with Turkey in recent months, as air forces loyal to Syria’s president, Bashar Assad, continue their bombing of marketplaces, hospitals and other civilian centers.The Obama administration suspects the Assad regime is targeting civilians and aid workers to create fear and panic among supporters of the opposition – and that Russia, its closest ally, is supporting the strikes in order to stoke Europe’s crippling refugee crisis.Damascus denies targeting civilians, insisting it is only after terrorists.In an effort to save the negotiations, foreign ministers from a group of 17 nations called the International Syria Support Group – which includes Germany – will meet in Vienna on Tuesday.They seek to reinvigorate the UN-led intra-Syrian talks, which broke down in Geneva last month.Tangential to the talks over Syria’s civil war – between Assad and the five-year-old rebellion against him – global leaders are also expected to discuss the fight against Islamic State, which metastasized in 2014 in a vacuum of power in eastern Syria.Since the organization claimed responsibility for attacks in Paris and Brussels, European powers have grown wary that its terrorists may have infiltrated last year’s flood of refugees through Greece and the Balkans.Germany shares this concern: On Wednesday, federal police here acknowledged at least 40 investigations into Islamic radicals who have entered the country disguised as refugees.