OPCW source says US has alternatives to host WMDs.

By REUTERS
Albania protests against hosting destruction of Syria CW 370
(photo credit: REUTERS/Arben Celi)
Advertisement
THE HAGUE/TIRANA - Albania rejected on Friday a US request to host the destruction of Syria's chemical weapons, dealing a blow to a US-Russian accord to eliminate the nerve agents from the country's protracted civil war.Negotiations went down to the wire, delaying the scheduled adoption on Friday of a step-by-step plan to get rid of 1,300 tons of Syria's sarin, mustard and other agents.Albania's refusal marked an unprecedented break from its traditionally staunch allegiance to NATO ally Washington. It followed a storm of protest in the Adriatic republic, where protesters complained of exploitation."It is impossible for Albania to get involved in this operation," Prime Minister Edi Rama, just two months in the job, said in a televised address to the nation."We lack the necessary capacities to get involved in this operation," he said, following days of growing protests outside government buildings.Hundreds of demonstrators, including students cutting school classes, gathered to denounce the plan on Friday, "NO" painted on their faces. 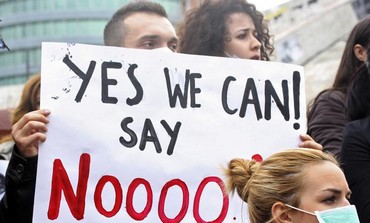 There was no immediate indication where the United States or Russia might look next to dispose of thousands of tons of toxic waste.Friday was the deadline for the details of the plan to be agreed by Damascus and the Organization for the Prohibition of Chemical Weapons (OPCW) in The Hague."There will be no host country in the decision this afternoon," an OPCW source said. "But they [the United States] have alternatives." The source did not elaborate.Faced with the threat of US missile strikes, Syrian President Bashar Assad in September agreed to destroy the entire chemical weapons stockpile following a sarin gas attack that killed hundreds of people in Damascus on August 21.Washington said only Assad's forces could have carried out the attack, a charge the Syrian leader denied.Tight deadlinesA draft proposal being reviewed by the Executive Council on Friday called for most chemical materials to be removed from Syria in just six weeks, or by December 31, and for remaining chemical weapons facilities to be destroyed by March.Saying it respected Albania's decision, the United States stressed it remained confident of meeting the deadlines."The United States will continue to work with Allies and partners as well as the OPCW and the United Nations to ensure the elimination of Syria's chemical weapons program," the US embassy in Tirana said in a statement."We remain confident that we will complete elimination of the [weapons] program within the timeline agreed upon," it said.Still to be worked out, however, is how to safely transport the chemical weapons through contested territory to a port in northern Syria to be shipped abroad.Once the chemicals are safely out of Syria, the pressure will be off for them to be destroyed in the short term, but diplomats are concerned they could fall into the wrong hands, be targeted by militants, or stolen and sold on the black market.Final destruction of all toxic material must be completed by the end of next year, six months beyond the date originally set out in a Russian/US agreement.The timetable is part of an ambitious disarmament pact, backed by the United Nations and which may also bring in the support of the NATO military alliance and other countries offering logistical, financial and technical assistance.Albania destroyed its own small arsenal of chemical weapons in 2007, but an expensive facility will need to be built to process up to tens of thousands of tons of toxic waste that is a byproduct of chemical weapons destruction.