The Ramallah ‘gentleman’ who could become PA president

The Fatah Central Committee has decided to nominate one of its members, 62-year-old Hussein al-Sheikh, to replace former PLO Secretary-General Saeb Erekat.

Discussions and rumors about leadership succession in the Palestinian Authority have resurfaced in the wake of Hussein al-Sheikh’s meteoric rise to power.

Last week, the Fatah Central Committee, a decision-making body dominated by loyalists of PA President Mahmoud Abbas, announced it had “unanimously nominated” one of its members, the 62-year-old Sheikh, as its candidate for membership in the PLO Executive Committee.

Sheikh, who has been serving since 2007 as head of the PA General Authority of Civil Affairs, is expected to officially replace former PLO chief negotiator and PLO secretary-general Saeb Erekat, who died in November 2020.

The nomination is expected to be ratified by another key decision-making body, the PLO Central Council, if and when it convenes in Ramallah early next month.

Fatah’s decision to nominate Sheikh as its candidate for replacing Erekat was taken at the request of the 86-year-old Abbas. At least three Fatah officials are said to have expressed reservations, but to no avail. 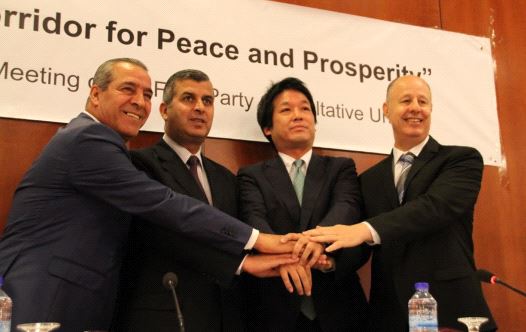 The decision did not surprise many Palestinians, including senior Fatah officials in the West Bank.

Since Erekat’s death, Sheikh has been carrying out his duties.

Sheikh has since become the official spokesman of the PA in both the local and international arenas. He holds regular meetings in his office in Ramallah with diplomats and foreign officials from all over the world.

Additionally, he often attends meetings held by Abbas and world leaders, as well as with Israeli governmental officials.

A Western diplomat who met with Sheikh recently described him as a “real Palestinian gentleman.” Sheikh “is the type of Palestinian the Israelis and Americans can do business with,” she added.

“Abbas does not like to travel anywhere without Hussein al-Sheikh and Majed Faraj [head of the Palestinian General Intelligence Service],” a former PA minister said. “President Abbas has created the impression that these are the only two men he trusts.”

Faraj, 59, hails from the Dehaishe refugee camp, south of Bethlehem, and is considered a major ally of Sheikh, who is a resident of Ramallah.

Some Palestinians believe Abbas is paving the way for Sheikh and Faraj to assume control of the PA after his departure from the scene.

“It seems that President Abbas has made up his mind,” a PLO official told The Jerusalem Post. “These two men [Sheikh and Faraj] are today the most powerful figures in the Palestinian leadership after the president. When the president is gone, they will most likely become major players in the Palestinian arena. One will be in charge of civilian and political affairs, while the other will be responsible for security.”

A number of senior and veteran Fatah officials who have seen themselves as potential successors are “outraged” by Abbas’s decision to promote and bolster the standing of Sheikh and Faraj, according to sources in Ramallah.

The two men maintain strong relations with Israel, the US and Russia, the sources said. They are also vocal enemies of Hamas and support the controversial security coordination between the PA security forces and Israel.

The disaffected Fatah officials include Jibril Rajoub, Mahmoud al-Aloul, Marwan Barghouti and Tawfik Tirawi.Until recently, it was widely believed that Aloul, the 72-year-old deputy chairman of Fatah, was the person most likely to succeed Abbas. Rajoub, 68, who holds the position of secretary-general of the Fatah Central Committee, was also seen as a leading candidate for the presidency.

Over the past year, however, Abbas has sidelined Aloul and Rajoub, keeping them away from the decision-making process of the Ramallah leadership.

Aloul was entrusted with coordinating the anti-settlement activities of the “popular resistance” in the West Bank, a mission that has earned him much respect among the Palestinian public. Aloul shows up at many major anti-settlement protests and is a frequent participant in various rallies in different parts of the West Bank.

Rajoub, for his part, has been busy trying – thus far unsuccessfully – to end the dispute between his Fatah faction and Hamas. Last year, he suffered a major blow when a deal he helped broker with Hamas to hold general elections collapsed after Abbas called off the vote.

Barghouti, 62, who is serving five life terms in an Israeli prison for his role in terrorism during the Second Intifada, remains extremely popular among many Palestinians, who say they want to see him replace Abbas.

Tirawi, 73, a former head of the PA General Intelligence Service in the West Bank and member of the Fatah Central Committee, is not regarded by many Palestinians as a serious candidate for the presidency. In recent years, Tirawi has openly criticized the PA and Fatah leaderships, a move that accelerated his fall from grace.

Despite their displeasure with the rising power of Sheikh and Faraj, the disillusioned Fatah officials have refrained from coming out in public against Abbas and the Palestinian leadership. That, however, does not mean that they won’t try to challenge the two in the future.

For now, all eyes are set on Sheikh, who met on Sunday evening with Foreign Minister Yair Lapid. The meeting is also seen in the context of Abbas’s effort to elevate Sheikh, who also attended the recent meeting in Rosh Ha’ayin with Defense Minister Benny Gantz.

A member of Fatah since he was a teenager, Sheikh spent 11 years in an Israeli prison from 1978 to 1989. After his release from prison, he became a member of the Unified National Command of the First Intifada, which erupted in 1987.

After the establishment of the PA in 1994, Sheikh was given the rank of colonel in the Palestinian National Security Forces, a job he held until 1997.

Sheikh claims he was wanted by Israel for a period of five years after the Second Intifada erupted in 2000.In 2007, Abbas appointed him as head of the General Authority of Civil Affairs, a position that requires full civilian coordination with Israel.

Sheikh’s associates say his many achievements include obtaining tens of thousands of permits from the Israeli authorities for Palestinian family-reunification applications. This practice enables Palestinians living abroad to reunite with their families in the West Bank and Gaza Strip after receiving Palestinian ID cards.

Sheikh was first elected as a member of the Fatah Central Committee in 2008. He has since been reelected twice by Fatah’s “General Assembly.”

If he takes over as PLO secretary-general (a position previously held by Abbas), Sheikh will become the No. 2 in the Palestinian leadership.

“The Israelis and the Americans like to talk a lot about the so-called battle of succession in the Palestinian leadership,” said a top Fatah activist. “But no one is asking the Palestinian people who they want to see as their president. All the names being mentioned as possible successors are worthless as long as they don’t have the support of the Palestinians. The only way to choose our leaders is through free and fair elections, and not by discussing the issue in the Israeli and Western media.”