Israeli aircraft dropped leaflets warning that Israel would not tolerate any presence of the Syrian military in the demilitarized zone. 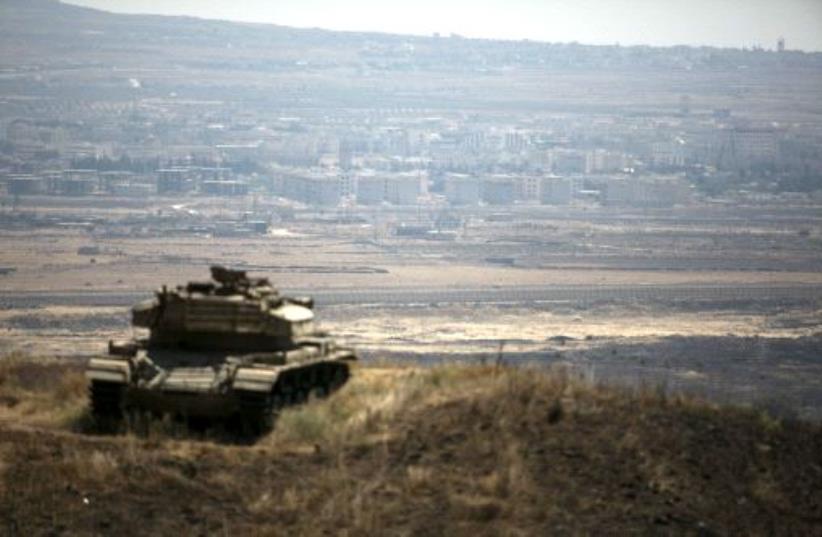 The Syrian area of Quneitra is seen in the background as an out-of-commission Israeli tank parks on a hill, near the ceasefire line between Israel and Syria, in the Golan Heights.
(photo credit: BAZ RATNER/REUTERS)
Advertisement

Israeli tanks targeted positions belonging to the Syrian military near El Malgah in the Quneitra region of southwestern Syria early Wednesday morning, according to Syrian reports.

After the alleged tank strike, Israeli aircraft dropped leaflets warning that Israel would not tolerate any presence of the Syrian military in the demilitarized zone, according to the opposition-affiliated Radio Houran.

The last alleged Israeli strike in Quneitra was reported in May, when one strike targeted the Qurs al-Nafl site and another strike targeted sites in Jubata Al Khashab and az-Zuhur, areas where both the Syrian military and Hezbollah operate.

The strike on Wednesday comes just a day after the Syrian Air Force and the Russian Air Force held a joint training exercise over multiple areas across Syrian, including the Syrian Golan Heights.

In January, Syrian and Russian military jets jointly patrolled the airspace along Syria's borders, including over the Syrian Golan Heights, with the two countries announcing that they planned to make such flights regular.

The strike also comes just two days after an alleged Israeli airstrike targeted sites south of Damascus, including an Iranian weapons factory, according to the Syrian Capital Voice site.

According to the report, the strike was carried out in a single wave, resulting in the complete destruction of the factory, without any other sites targeted. Five members of pro-Iranian militias, who were protecting the factory, as well as a number of Iranian engineers working on developing weapons, were killed in the strike, according to the Capital Voice.

On Wednesday, the IDF's Arabic-language spokesperson Avichay Adraee uncovered an observation post being used by Hezbollah under the cover of the Green Without Borders environmental organization.