Turkey's leaders are taking a second look at their policy in Syria as new terror organizations seize control of different regions. 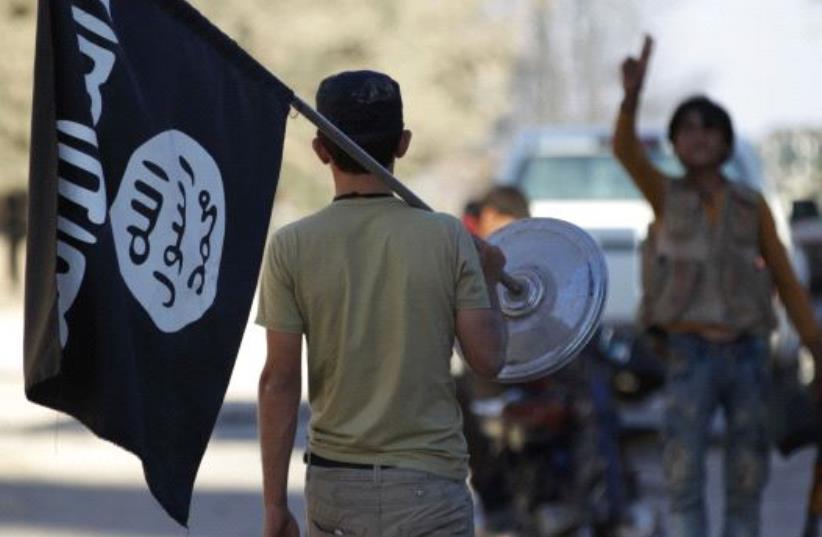 A rebel fighter takes away a flag that belonged to Islamic State militants in Akhtarin village, after rebel fighters advanced in the area, in northern Aleppo Governorate, Syria, October 7, 2016
(photo credit: REUTERS)
Advertisement

A former Kurdish area of Syria that was ethnically cleansed in 2018 by Turkish-backed Syrian rebel groups is now partly in the hands of an even more extreme group called Hayat Tahrir al-Sham.

This group, known as HTS, is an outgrowth of what was once Al Qaeda in Syria, and which was rebranded as “Nusra” and then HTS over the last decade. The infighting between HTS and Syrian rebel groups illustrates how Turkey has created a nightmare for civilians in Syria, and also how what was once the Syrian rebellion has been transformed into proxy groups.

The fighting leaves locals with little hope that their lives will improve. The area of Afrin is made up of rolling hills and olive orchards. It was once a peaceful area and, during the horrors of the Syrian Civil War, it was saved from the destruction of other areas by Kurdish self-defense groups. Those groups eventually coalesced around the YPG or People’s Defense Units.

The areas around Afrin were often contested between elements of the Syrian regime and a plethora of Syrian rebel and jihadist groups. Over time, Turkey began to take control of this area of Syria. It co-opted Syrian rebel groups and turned them into proxies. Turkey accused the YPG of being “terrorists” even though there were never any “terror” attacks on Turkey.

In the neighboring area of Idlib, the HTS group became dominant. Meanwhile, many hundreds of thousands of Syrians who had been displaced by the Syrian regime fled to these areas near the Turkish border. Turkey infiltrated there and then ordered Syrian rebel groups to attack Afrin in 2018. During the fighting, the Kurds of Afrin were forcibly expelled from their homes, and minority groups, such as Yazidis, were persecuted.

A Syrian woman is seen during an evacuation of rebels and civilians from Beit Jann, in Mogher al-Meer village, Syria December 29, 2017. (credit: OMAR SANADIKI/REUTERS)

Religious jihadist extremists took over the area. These groups kidnapped women and murdered civilians. In many ways, they behaved like ISIS, targeting minorities. Meanwhile, ISIS commanders fled from Raqqa, some of them via Turkey, and came to Idlib and Afrin. HTS began to escort Turkish forces in the area.

THE RISE of HTS control and the presence of ISIS members led to several US raids between 2019 and 2022. Many ISIS members moved into homes in Idlib and Afrin next to border crossings to Turkey – which, as a member of NATO, didn’t carry out any strikes on extremists in these areas. Instead, Turkish drones continue to target Kurds in eastern Syria, including killing Kurdish commanders who work closely with US anti-ISIS forces.

Now HTS has taken over Afrin, and Turkey appears to have coordinated between HTS and Syrian rebel groups. The takeover comes as Turkey’s leader was in Kazakhstan for talks with Russia’s Putin on the sidelines of the Conference on Interaction and Confidence Building Measures in Asia (CICA) confab.

“Earlier this week, amid administrative conflicts and infighting in the northwest Syrian region, the HTS dispatched its fighters from Idlib eastward into the district of Afrin,” Ahval media reported. “HTS fighters were able to quickly expand northeast on Wednesday and Thursday of this week, taking full control of Afrin and some 26 towns and villages to its southwest, most without a fight, the Middle East Institute reported.”

The takeover of Afrin by HTS poses several questions and threats. During the Trump administration there was a split among policy makers over what the US should do in Syria. While some favored the Pentagon and US Central Command’s approach of working with the Syrian Democratic Forces in eastern Syria to fight ISIS, others believed that the US should work with Turkey and extremist groups in northwest Syria to fight the Syrian regime.

The problem for those that favored fighting the regime was that Ankara was in a process of co-opting Syrian rebel groups to use them against Kurds, rather than fight Damascus. For some think tank commentators in Washington, the only group that held out any hope was HTS. 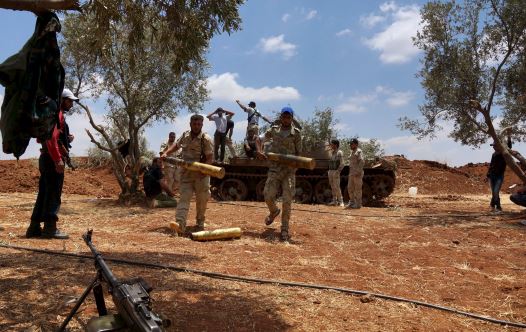 THIS MIGHT seem counter-intuitive because US official policy views HTS as a terrorist group. Nusra front leader Mohammed Al-Jolani, who became the head of HTS, had been designated a terrorist by the US since 2013. But some Trump era officials saw that as an Obama policy. There was an attempt to whitewash HTS and make it seem like a legitimate force, even if that meant ethnically cleansing Afrin and working with extremists who suppress women and minorities.

This is part of a long flirtation with extremism by some in the US who had backed the Mujahideen in Afghanistan in the 1980s and preferred a policy of working with Pakistan, the AKP in Turkey, the Muslim Brotherhood in Egypt and Qatar, which backs extremists around the region. In fact, the US decision to sign a deal that brought the Taliban back to power was part of this bizarre policy: fighting the Taliban on one side, while preferring it on the other.

In Syria the same Janus-face led the US to work with the SDF, the partly Kurdish group that supports women and minority rights in eastern Syria, while simultaneously working with the extremists in northwest Syria.

In 2021, with the Biden administration in office, there were attempts to rebrand HTS and Jolani.  PBS and other media outlets were provided access to Jolani so that HTS could normalize itself in the West. “Syrian Militant and Former Al Qaeda Leader Seeks Wider Acceptance in First Interview With U.S. Journalist,” the PBS interview noted.

Suddenly al-Qaeda, which the US was supposedly at war with since 9/11, was giving glowing interviews. By June 2021, reports said “a powerful Syrian militant called a terrorist by the US seeks a new relationship with the West.”

But for those who thought the US might be enticed to work with Turkey and Turkish-backed extremist groups in Syria, bad news came next month in July when the US sanctioned Ahrar al-Sharqiya, another group backed by Turkey, which had been involved in Turkey’s 2019 offensive in which Turkish-backed groups murdered Kurdish activist Hevrin Khalaf. This was a continuation of the January 2018 destruction of Afrin by the same groups. 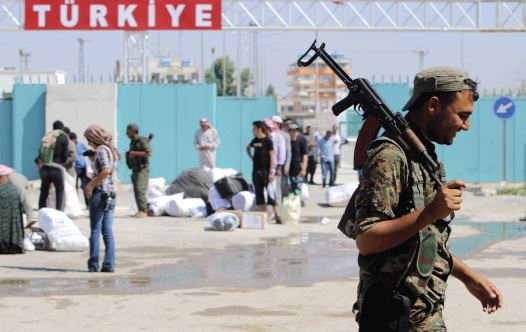 A KURDISH People’s Protection Units (YPG) fighter walks near residents who had fled Tel Abyad, as they reenter Syria from Turkey (credit: REUTERS)

Is Turkey taking a clear stance?

NOW TURKEY has pivoted again. Having used groups like Ahrar Al-Shariyq, giving them safe haven and supporting them to fight Kurds, Yazidis and Christian minorities in Syria, Ankara appears to want to let HTS take over areas run by these former rebel groups. But why would it prefer HTS to groups it had co-opted and wasted time and resources supporting for the last four years?

But the presence of the rebel groups left much to be desired. The groups often fought each other and kidnapped locals for ransom, sexually assaulting women and businesspeople.

Ankara’s dreams of turning Afrin and other areas in northern and northwestern Syria into a small Syrian proxy mini-state have not gone well. Turkey even threatened more operations and wars against Kurdish groups in 2021 and 2022 but received push-back from the Biden administration.

Now Turkey apparently thinks the Syrian groups it mobilized in 2018 to fight Kurds can be pushed aside. It uses drones to assassinate Kurds in Syria and may think that its rebel groups are not up to the task of doing much besides bombarding civilians and kidnapping people. HTS, by contrast, has proven itself a more disciplined force. Turkey has worked with HTS for years, and now it may gamble that the empowering of HTS could lead to a shift in policy.

Ankara has long sought a way to work with the Syrian regime, via close contacts with Damascus and the so-called Astana process where Russia, Turkey and Iran work on Syrian issues. On October 6, Turkey hinted it could meet with the Assad regime “when the time comes.” If the Syrian rebel groups can be pushed aside and HTS empowered, then Turkey could sell this to Damascus, Moscow and Washington as a fait accompli.

The Assad regime wants the rebels sidelined and has been happy to see Ankara’s efforts to co-opt them to fight the Kurds. The regime has in the past worked with extremist groups, releasing extremists in 2011 and also funneling them to fight the US in Iraq from 2003 to 2011.

This means that having HTS run areas in northern Syria may appeal to many of those involved. Russia, involved in a war in Ukraine, wants peace and quiet in Syria; it doesn’t want HTS threatening its forces in Latakia, or problems from the rebel groups. Ankara could sell this to Moscow as a way to let Russia attack HTS, or come to an agreement with the extremist group. If the Assad regime attacks Afrin now, for instance, it will be attacking HTS, not Turkish-backed proxies.

Turkish Kurds look towards the Syrian Kurdish town of Kobani from the top of a hill close to the border line between Turkey and Syria near Mursitpinar bordergate (credit: REUTERS)

This may also enable Turkey to concentrate on fighting the SDF. Recent drone strikes by Ankara on key SDF commanders who work with the US could be a prelude to that shift.

IN SHORT, the HTS moves in Afrin open up many opportunities. For some in Washington who have advocated quietly for the US to work with the group, or have attempted to re-brand it, this is wind in their sails. For Moscow and Ankara, in talks about making Turkey a Russian gas hub for Europe, this could help matters in Syria and reduce friction between Turkey-Russian forces, enabling Ankara to shift focus to areas in eastern Syria.

VOA news notes that experts think the advances by HTS show divisions within the Turkish-backed rebel groups; some of whom sided with HTS. This couldn’t happen without the approval of Ankara, which has never opposed the group. The areas Ankara controls in Syria have become home to extremists, including ISIS members and Al Qaeda types.

Ankara wants to manage these groups – and it apparently thinks HTS should now cement control of Afrin. For women and minorities, this means there is no chance for the former diversity of this region to return. In a strange irony; while women are protesting in Iran, there are no chances for them to protest in Afrin or Idlib, areas where NATO-member Turkey operates.