Jose Maria Aznar shares his thoughts on the boycott movement and his vision for Israel to be an integral part of the West. 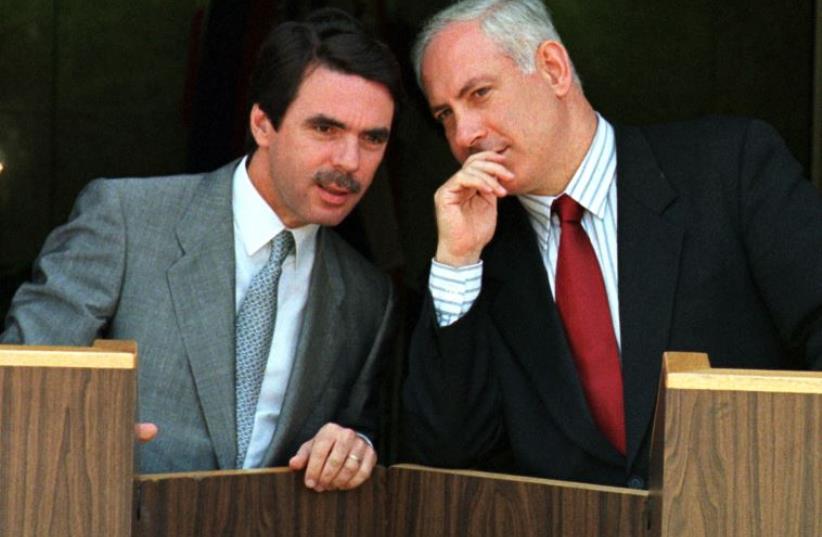 Prime Minister Benjamin Netanyahu (R) confers with Jose Maria Aznar, the former prime minister of Spain, during their joint press conference, June 29, 1998
(photo credit: REUTERS)
Advertisement
On the cover Spanish daily El Pais on June 30, 1998 was a photograph of Prime Minister Benjamin Netanyahu, then serving his first term, next to his Spanish counterpart, then-prime minister Jose Maria Aznar. The photo was taken at a joint press conference that the two leaders held a day earlier. Demonstrating the close relations between Netanyahu and Aznar, the two men can be seen in the photo half smiling with their heads close together as if they had just shared a secret. "Aznar supports Netanyahu in Jerusalem," read the headline of that day's paper. "Prime Minister Aznar has extended good will to the Israeli prime minister who is currently experiencing a difficult period in the international arena," the paper wrote. Those were in fact complicated days for Netanyahu. From a security standpoint 1998 was one of the quietest years since the Oslo accords were signed, but the international community, led by the Clinton administration in the US, did not view positively the dead end in negotiations with the Palestinians and the continued settlement building in the West Bank. Netanyahu was not enjoying peace on the domestic front, either. On the same June day on which Netanyahu met with Aznar, then-president Ezer Weizman called for the elections to be moved forward due to the stalemate on the diplomatic front. Seventeen years have passed. Netanyahu has just begun his fourth term as prime minister and he is in the most difficult conflict he has had in his career with the administration in Washington. Renewal of negotiations with the Palestinians does not seem likely and a campaign of delegitimization is working to isolate Israel from the international community. Now, as in 1998, Aznar was supposed to be at Netanyahu's side offering support in the face of the Israeli prime minister's enormous challenges. Aznar was invited to be a keynote speaker at this year's Herzliya Conference and a meeting was scheduled with Netanyahu, but an air traffic controller's strike in Spain prevented his arrival.  Amid the controversy surrounding the CEO of Orange's statement regarding the curtailing of his company's business in Israel, Aznar agreed to speak with The Jerusalem Post's Hebrew-language sister publication Maariv-Hashavua in order to express his steadfast objection to the BDS movement. "I think BDS is an unfair, discriminatory movement based on a moral double standard that is, in the final analysis, anti-Semitic," Aznar told Maariv. "Declaring its aim to put pressure on the Israel government, BDS is in fact trying to harm every Israeli citizen and not only the government. In reality what BDS wants is to make life in Israel intolerable so the Jewish nation will not be able to have a normal existence in its state. BDS does not only want to change the government's policy, it wants to empty the country of Jews," Aznar said. The former prime minister also shared his criticism of the European Union over its anticipated publication of regulations regarding the labeling of products manufactured in the West Bank.  "People including the bureaucrats in the EU need to understand that companies that invest in the West Bank provide jobs and opportunities for the Palestinian nation," Aznar said, adding, "Getting companies to leave there [the West Bank] will not have a positive impact but just the opposite. Greater, not less, economic activity is required in the territories. The only way to create a Palestinian middle class is through investments and commerce." "I think that governments must condemn all policy that discriminated unfairly against Israel. Such polices are not just unfair they are also idiotic. Israel is practically the laboratory of many innovations that the entire world enjoys, from high tech to health. Harming the connections with Israeli academics, scientists, artists and entrepreneurs, will have a negative impact on our culture and prosperity." Aznar believes that Israel should deal with BDS by focusing on who stands behind the movement. "I believe that the real motives of the BDS leaders should be revealed. Senior government officials and corporate executives should be made to know about the negative consequences of BDS, and a clear alternative narrative should be put forward," Aznar offered. Five years ago Aznar founded the international organization “Friends of Israel,” a body made up of former political leaders who fight against the deligitimization of Israel.    Friends of Israel was the body that stood behind the ad-hoc High Level International Military Group, whose 11 members that included the former NATO Military Committee chairman Gen. Klaus Naumann of Germany, recently submitted a report to the UN arguing that the IDF acted within the bounds of international law during its war with Hamas in Gaza last summer. Aznar also believes Israel should become a full member of the European Union and of NATO.  "My vision is for Israel to become an integral part of the Western world and for this to happen it needs to be a partner in the West's economic and security institutions," the former prime minister said.When asked what has made him such a close friend of Israel, Aznar said he could not isolate a single reason. "I don't believe that there is one reason or historical juncture that caused me to believe what I believe: that Israel is an essential and integral part of my world and my civilization, the West," he said. "I am clearly more outspoken today because I have a feeling of urgency. The world is not going in the direction that I would want it to and the Middle East is becoming more and more relevant for everyone." "The forces that will shape the Middle East for the next fifteen years will be the power to shape the entire world, for good and for bad. Therefore, I believe a strong Israel in the region is our only hope if we want to influence what will unfold," Aznar said.   Translated by Nathan Wise