Sisi's trip is being seen as a further sign that the former general’s regime is being welcomed in from the cold by Western governments. 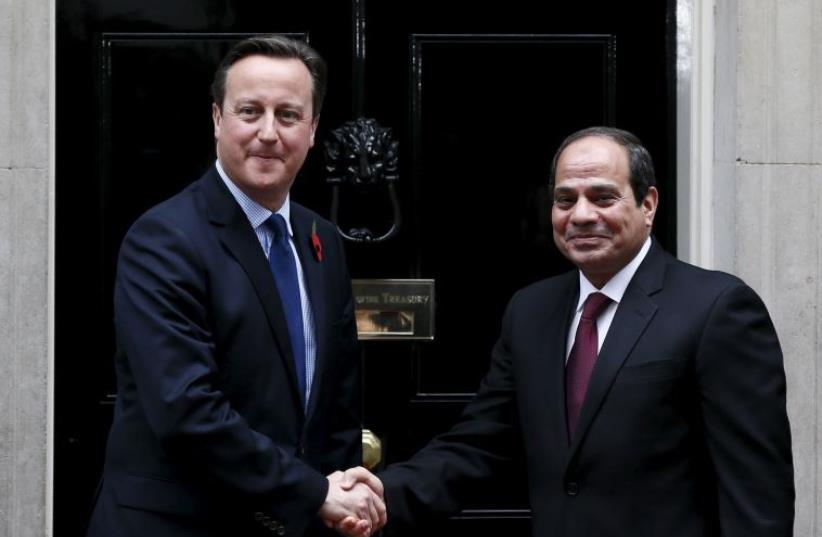 UK Prime Minister David Cameron with Egyptian President Abdel Fattah al-Sisi
(photo credit: REUTERS)
Advertisement
President Abdel Fattah Al-Sisi of Egypt arrived in London for his first state visit to the United Kingdom since taking power in a coup during the summer of 2014. His trip is being seen as a further sign that the former general’s regime is being welcomed in from the cold by Western governments. Sisi’s presence is, for the second time in a matter of weeks, prompting strong criticism of Prime Minister David Cameron for hosting another world leader with a dreadful record on human rights following China’s Xi Jinping’s October visit.Although lacking the size and impact to be categorized as an emerging superpower like China, Egypt nevertheless possesses great importance as a leading Arab nation with strong ties to the West while among its bona fides is its role as custodian of the Suez Canal, the man made channel that connects the Red Sea to the Mediterranean through which most of the West’s oil passes. Egypt’s size and strength as the most populous Arab nation [82 million] makes it an important ally for Western interests, Gilbert Ramsay, a lecturer in terrorism and political violence at St. Andrews University, told The Media Line. In the past, Egypt was seen as a force for stability, and as being capable of “keeping a lid on extremism” in the region, according to Ramsay, who suggested that while this belief is less certain since the upheavals of 2011, it remains a belief Sisi is committed to cultivating. President Sisi came to power when the army which he headed stepped in to remove Mohamed Morsi, the country’s first leader to be chosen democratically, in what amounted to a coup d’etat. Morsi, of the Islamist Muslim Brotherhood, had angered many Egyptians with religiously inspired legislation and had sparked popular protests against his rule. But the severity of Sisi’s army when restoring order to the country elicited criticism from local and international human rights groups and from some Western leaders. Hundreds of Egyptians were killed and thousands arrested during the disorder following Morsi’s fall from power and imprisonment. The Muslim Brotherhood has since been banned and branded a terrorist organization.Wider events in the Middle East are pushing such concerns to the sidelines, Gamal Soltan, a professor of politics at the American University of Cairo, told The Media Line. “Developments in the region such as terrorism and failing states, are making the relationship necessary,” Soltan said, adding that this is, “enhancing Egypt’s importance,” to countries like the UK. In the Sinai Peninsula, Egyptian security forces have been locked in a conflict with an affiliate of the Islamic State (ISIS), and with the conflict in Syria no closer to ending, many Western leaders, including Britain’s David Cameron, appear to be taking allies wherever they can find them. Events in the Sinai and Egypt’s concerns there have been highlighted by last week’s crash of a Russian passenger plane over the Peninsula which killed all 224 people on board, mostly Russian tourists. Although the cause of the crash has not been established, ISIS has claimed responsibility and most experts are now leaning to the belief that the Metrojet Airbus 321-200 was brought down by a bomb. For Sisi, the visit to the UK “will be about further integration of Egypt (back) into the international community after the turmoil of the recent past,” Soltan explained. Egypt has security concerns of its own, not least among them its neighbor, Libya. The UK had a part to play in the removal of Libya’s former ruler, Muammar Ghaddafi, and the chaos that followed, Soltan said. According to Soltan, it is likely that the Egyptian leader will urge Cameron to “end the current policy of doing nothing – which is the current UK policy on Libya - as it’s a policy which is not working.”“What the UK wants from Egypt (in return) is the same as in the past – stability and a positive partner in the Middle East,” Ramsay said. The question, though, is whether or not the Sisi regime is so tainted by the actions it took to restore order in Egypt that it is no longer a desirable ally for the UK.In hosting President Sisi, the UK government appears to be saying that it has no such concerns. “David Cameron is rolling out the red carpets once again, this time for a President who has overseen one of the worst crackdowns on human rights in Egypt in decades,” Nadine Haddad of Amnesty International told The Media Line. The international rights group believes this is the wrong message to be sending and is concerned that British weapons sold to the Egyptian government will be used to “commit or facilitate serious human rights violations.” The fuss being made about the former general’s visit to the UK will have little impact and will be quickly forgotten, Scott Lucas, of Birmingham University’s Political Science department, told The Media Line. “When you have countries that have a suspect record on human rights visiting, you’ll have a flurry of stories, then you’ll have some protests in London trying to gain some visibility, and then within a few days the stories are gone.” He explained that like with the visit of Chinese Premiere Xi Jinping, the British public is unlikely to pay too much attention to human rights violations far away from home. According to Lucas, unending stories about human right violations cause apathy among audiences. “People get fatigued, they just get tired. These are just numbers of people who might be detained – you can’t humanize them.”