By REUTERS
OCTOBER 11, 2013 11:17
OPCW 370
(photo credit: REUTERS)
Advertisement
OSLO - The Organization for the Prohibition of Chemical Weapons (OPCW), which is overseeing the destruction's of Syria's arsenal, won the Nobel Peace Prize on Friday, the Norwegian Nobel Committee said.Experts from the Hague-based global chemical weapons watchdog, supported by the United Nations, are working to destroy Syria's massive chemical weapons stockpile after a sarin gas strike in the suburbs of Damascus killed more than 1,400 people in August. 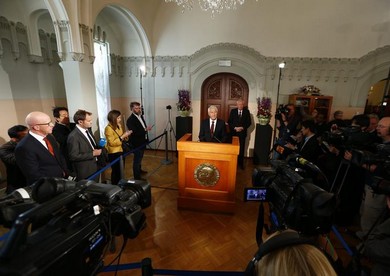 Chairman of the Nobel Committee Thorbjorn Jagland announces the winner of the Nobel Peace Prize, October 11, 2013. (Reuters)The $1.25 million prize will be presented in Oslo on Dec. 10, the anniversary of the death of Swedish industrialist Alfred Nobel, who founded the awards in his 1895 will.Norwegian public broadcaster NRK, which has a strong track record leaking the names of winners, reported the OPCW's victory more than an hour before the official announcement.US PROPOSALThe Pentagon is suggesting the world's chemical weapons watchdog use a US-made mobile destruction unit in Syria to neutralize the country's toxic stockpile, officials told Reuters.It gave a briefing on the unit on Tuesday to officials at the OPCW, two officials said.Faced with the threat of a US military intervention, Syrian President Bashar Assad agreed last month to a US-Russian plan to destroy his sizeable chemical weapons program by the middle of 2014.Initial talks between Washington and Moscow about where to destroy the stockpile included shipping it abroad, but it is illegal for most countries to import chemical weapons, making on-site destruction more likely.Syria and the OPCW must make a decision on what technology will be used by Nov. 15."Our people's initial response was that it looks encouraging. It looks ideal," said a source in the OPCW who attended the briefing. "But we don't know how it will perform in the field and we would like to know the response from Syria and other countries with similar technology."The source said two of the units have been produced and several more are under production.It will largely depend on how Syria's suspected 1,000 tons of sarin, mustard and XV nerve agents are stored. The unit can destroy bulk chemicals, or precursors, but not munitions with a toxic payload. Separating these is more dangerous and time-consuming than incinerating or neutralizing precursor chemicals."This is very big business, very political, and several governments are pushing for it," said chemical weapons expert Dieter Rothbacher, who used to train inspectors at the OPCW. "These units will be operating in Syria for a long period of time."Several countries have already been contacted to provide technicians for trials with the U.S.-made unit, which finished a trial stage in August after half a year of development, said a source who asked not to be named. It is known as the Field Deployable Hydrolysis System (FDHS).A US defense official, speaking on condition of anonymity, said the unit costs roughly $5 million to build.RAPID DEPLOYMENTThe official confirmed that a senior US defense official briefed the OPCW about the system, developed at the US Army's Edgewood Chemical Biological Center. It could be operational within 10 days of arriving on site, the center says on its website."In terms of the situation on the ground in Syria, it is the best viable option," said a person briefed about the FDHS unit, who spoke on condition of anonymity.OPCW spokesman Michael Luhan had no official comment about the reported briefing, saying the deadline for the detailed plan for the destruction of Syria's chemical weapons was Nov. 15. The Pentagon could not immediately be reached for comment.More than two dozen inspectors are already in Syria and have to visit at least 20 production, storage and research sites, some of them in rebel-held territory.As many as 100 experts will be needed to carry out a labor-intensive verification process, collect and secure declared weapons and witness the entire destruction process.The OPCW, established to enforce the 1997 Chemical Weapons Convention, is a tiny organization with around 500 staff and an annual budget of under $100 million. It will need significantly more to finish this task.Many members of the OPCW, including Russia, China, France, Ireland, Britain and the United States, have offered to provide technicians, experts and several million dollars in funding.Experts say meeting the June 2014 deadline for complete destruction is a difficult goal because the chemicals and weapons are spread over dozens of sites and foreign inspectors have never worked in an ongoing conflict.Ceasefires will have to be negotiated with opposition forces to allow for safe access to sites in their territory in a conflict that has already claimed 100,000 lives.The US unit, built by the ECBC and the government's Defense Threat Reduction Agency, is operated by a crew of 15. It can destroy up to 25 metric tonnes of chemical agents per day when run around the clock, according to Edgewood. Several units could be located on the same site, enabling the sharing of security and other assets, it said.