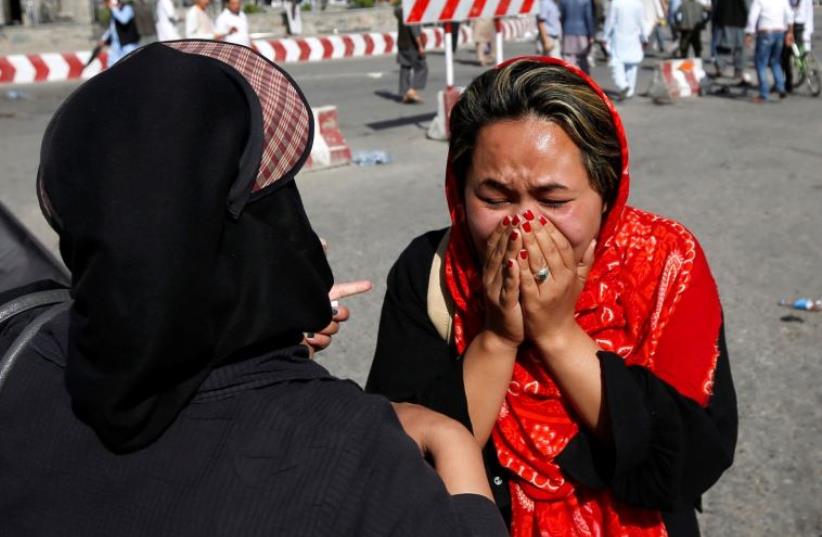 An Afghan woman weeps at the site of a suicide attack in Kabul, Afghanistan July 23, 2016
(photo credit: REUTERS)
Advertisement
Human Rights Watch (HRW) recently released its World Report 2020, a yearly summary of human rights conditions, and nations in the Middle East region received a less than glowing review.In Afghanistan, while there were lower rates of torture in certain facilities, there were elevated levels in others, especially those operated by the country’s special forces. The government did not hold people in power, such as high-level army officers, for transgressions such as sexual assault.“Elimination of violence against women also needs a strong government and an active civil society which are in doubt at present,” Ehsan Qaane, country director and legal and political affairs researcher at the Afghanistan Analysts Network told The Media Line.HRW notes that while the number of suicide bombing deaths has gone down, there are still thousands of Afghans who die as a result of the violence.“I don't see any possible sign of a reduction in civilian casualties, either, though I hope for it,” Qaane said.On Iran, the World Bank wrote: “In 2019, Iran’s judiciary dramatically increased the cost of peaceful dissent, sentencing dozens of human rights defenders to decades long prison sentences.”“Iran’s justice system is not independent and the judiciary’s role is to protect the revolution and the Islamic Republic’s leaders, rather than Iranian citizens,” Roya Boroumand, executive director of Abdorrahman Boroumand Center for Human rights in Iran, told The Media Line.“Denial of justice and the right to due process are key [human rights] violations as they affect all citizens and allow the authorities to silence those who want change and call for reform.”Other than the lack of due process, Boroumand believes that discrimination built into the laws is the most problematic human rights violations in Iran.“Discrimination affects a range of civil, political, social, cultural, and economic rights including people’s right to free speech, freedom of religion and beliefs … and restricts access to jobs, with the state being the biggest employer,” she said.Boroumand does not believe these laws will be reformed anytime soon.“As long as there is no accountability, the laws protect human rights abusers and do not recognize the citizens’ right to equality and justice, changes … will be neither significant nor sustainable,” she said.In the report, the Gulf countries were also particularly egregious offenders of human rights.Citing the detention of human rights activists and the abolishment of a free press, the report said: “The human rights situation in Bahrain remained dire in 2019.”Noting the draconian punishments for human rights activists in the United Arab Emirates and their re-detention without cause after completing prison terms, the World Bank wrote that “despite declaring 2019 the ‘Year of Tolerance,’ United Arab Emirates rulers showed no tolerance for any manner of peaceful dissent.”Saudi Arabia too cracked down on human rights defenders and any form of opposition: “Saudi Arabia faced unprecedented international criticism in 2019 for its human rights record, including the failure to provide full accountability for the murder of Saudi journalist Jamal Khashoggi by Saudi agents in October 2018, as well as the country’s dismal treatment of Saudi dissidents and human rights activists,” the World Bank report stated.According to Hiba Zayadin, a researcher in the MENA division at Human Rights Watch, freedom of speech is particularly restricted across the Gulf countries.“Freedom of expression across the Gulf has been worsening, especially with the divisions between the Gulf countries. … Anyone who speaks out against government policies is being jailed, prosecuted, and sometimes worse,” she told The Media Line. She contends that freedom of speech is particularly problematic in the region because of the type of government that has been established.“They are authoritarian regimes, this is their mode of control,” she said. “They’ve got this transactional relationship with their citizens. For the social services they afford their citizens, they expect there to be no political participation from the citizens, no criticism whatsoever.”“Some countries are more brutally authoritarians than others, like the UAE and Saudi Arabia.”Zayadin is not hopeful about human rights improvement in the Gulf countries this coming year.“There’s a lot of branding that goes on across the Gulf where they put a lot of money and time into presenting themselves as sovereign rights-respecting states but with no real action on the ground,” she said. “They need to look good on the global stage because they are seeking more foreign investment and in order to do that, they need to be more palatable to the West.”Fatima Yazbek, the head of the Committee on Reports and Studies at the Gulf Institute for Democracy and Human Rights, agrees, telling The Media Line: “The Saudi crown prince tries to promote himself as a real reformer (especially regarding women's rights) while behind the closed walls of the kingdom he brutally crushes any light of hope for any real and serious reforms.”When it comes to women’s rights, Khalid Ibrahim, executive director at the Gulf Center for Human Rights, contends that Saudi Arabia has the least favorable record in the GCC.“Across the Gulf countries, women are still not utilizing their full potential but … Saudi Arabia is the worst country in terms of violations to its citizens, and in particular, women,” he told The Media Line.Yazbeck is also not optimistic about the prospects for human rights in the Gulf’s near future.“We always hope for improvements in the human rights situation and highlight the violations committed so the international community would pressure the governments to put an end to these violations. However, I believe we won't be able to witness serious improvements in the Gulf under these governments,” she said.Across the region, the status quo on human rights is likely to remain without systemic reforms and global influence insisting on change.Read more articles from The Media Line.