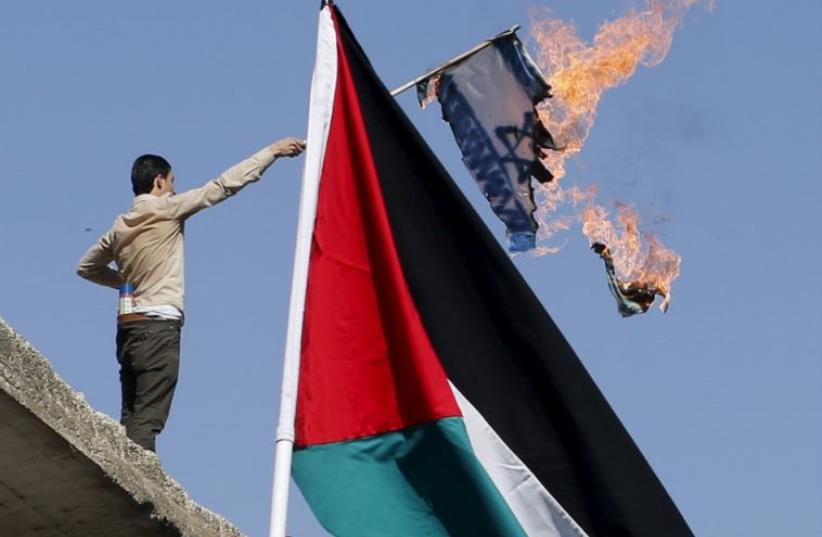 Protesters in Amman burn an Israeli flag during a protest to express solidarity with Palestinians
(photo credit: REUTERS)
Advertisement
After yet another protest of Jordanians against Israel, this time outside of the United Nations Development Program (UNDP), an Amman-based political risk analyst who closely watches the country’s domestic politics told The Jerusalem Post on Monday that this has become a common occurrence.Just about “every day it seems there is some new protest somewhere against Israel,” said Kirk Sowell, principal of Uticensis Risk Services, a Middle East-focused political risk firm.The latest protest occurred on Sunday outside the UNDP offices in Amman, with protesters demanding that the agency revise its contracts with the British- Danish G4S security company, which also works in Israel, The Jordan Times reported.Fadia Husseini, a member of a Jordanian group that organizes boycotts against companies and products linked to Israel, told the Jordanian newspaper that the company “provides security services for the ‘apartheid wall,’ for security checkpoints, and for a number of prisons and detention centers where many people are imprisoned, including children.”Husseini said the protesters hope to pressure G4S to cancel its contracts with Israel.Sowell observed that there are all kinds of Israel-related protests going on in the country.“I would expect them to look for pretty much any target,” he said.However, for the government, “it is more of a media-management issue and will not impact Jordanian policy in any meaningful way,” continued Sowell.“There has always been this gap between the kingdom’s foreign policy and the population.There are a fair number of Jordanians who would support peace with the right conditions, but Jordan’s policy is peace with Israel unconditionally, and only a very small minority support that.”Another protester, Juman Ismail, told The Jordan Times, “We want to send a message to the guards and employees working in Jordan that we are not against them and we hope they will be part of our struggle to put pressure on their company.”