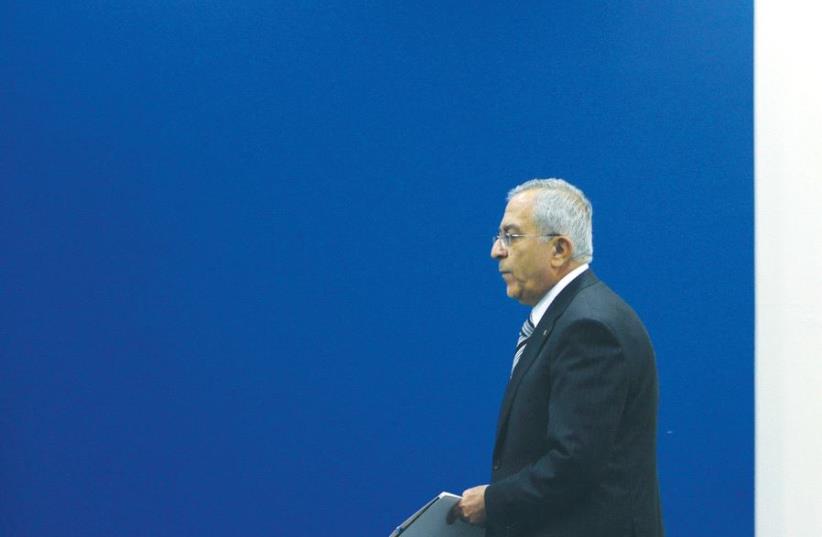 THEN-PALESTINIAN AUTHORITY Prime Minister Salam Fayyad arriving at a meeting in Ramallah in 2012.
(photo credit: REUTERS)
Advertisement
Former Palestinian Authority prime minister Salam Fayyad is planning to run in the Palestinian general elections at the head of a list of independent personalities, he said Sunday.
Fayyad, 69, served as prime minister from 2007 through 2013.
Between 2002 and 2005, he served as PA finance minister. He resigned from the PA cabinet in November 2005 to run as founder and head of the new Third Way list for the parliamentary election, which took place in 2006. The list won two seats in the 132-member Palestinian Legislative Council (PLC).
Fayyad’s No. 2 was Hanan Ashrawi, who was a member of the PLO Executive Committee. She recently resigned from the PLO.
Fayyad is expected to announce his decision to run in the elections in an interview with the Palestinian newspaper Al-Quds that will be published on Tuesday.
On the eve of the publication of the interview, some Palestinians said Fayyad was being backed by the United Arab Emirates, where deposed Fatah official Mohammad Dahlan, an archrival of PA President Mahmoud Abbas, is based.
Others said he was closely associated with Dahlan.
PA officials said Dahlan, a former PA security commander in the Gaza Strip, would not be allowed to run for president because he had been convicted by a Palestinian court of embezzlement and sentenced in absentia to three years in prison.
Dahlan loyalists in the West Bank, east Jerusalem and Gaza Strip who are being backed by the UAE said they would participate in the PLC election.
But Fayyad, in a post on Facebook, denied the claim that he was running in the elections at the behest of the UAE.
“This is totally out of the question and completely unfounded,” Fayyad said. “I am working on forming a list of independent personalities. To be very clear, the independence that I am talking about does not only mean that there is no partisan affiliation of these personalities. Rather, what is more important is that our parliamentary bloc will not be an extension of any organization, faction or group.”
He did not name the Palestinians who were expected to join his list.
“We will run in the elections with transparency and honor,” he said. “We will not coordinate with any other lists before the elections, and we will not be part of any majority coalition after it.”
Fayyad said he would support the formation of a Palestinian unity government after the elections.
“The challenges that face us at this stage require a national-unity government, which guarantees full partnership in decision-making by all components of the Palestinian political system, and not a majority government,” he said. “This is a principled and final position, and we will not deviate from it.”
Fayyad was born in the village of Deir el-Ghusun, near Tulkarm. He graduated from the American University of Beirut in 1975 and received his MBA from St. Edward’s University in Austin, Texas, in 1980. He later received a PhD in economics from the University of Texas at Austin.
Fayyad worked at the World Bank in Washington from 1987 to 1995 and as the International Monetary Fund’s representative to the Palestinians from 1996 to 2001.
It was not clear whether Fayyad intends to run in both the parliamentary and presidential elections, slated for May 22 and July 31, respectively.
His announcement came days after senior Fatah official Nasser al-Qudwa said he was in the process of forming a new list that would run in the parliamentary election. Qudwa, a nephew of former PLO chairman Yasser Arafat, previously served as PA foreign minister.
Qudwa said he would invite jailed Fatah leader Marwan Barghouti, who was sentenced to five life terms in prison for his role in anti-Israeli terrorist attacks during the Second Intifada, to join his list.
Qudwa also said he would support Barghouti if the latter decided to present his candidacy for the PA presidential election.
Qudwa’s decision to run separately from the official Fatah list angered some senior officials with the ruling faction, which is headed by Abbas. A senior Fatah official expressed regret over Qudwa’s decision and hinted that he may be expelled from Fatah.
Abbas recently warned that any Fatah official who runs outside the faction’s official list would be punished. Abbas fears that divisions in Fatah could play into the hands of its rivals in Hamas, as was the case in 2006, when Hamas won the parliamentary election, mainly due to the fact that several Fatah representatives ran as independents.
On Monday, Abbas is expected to convene the Fatah Central Committee in Ramallah to discuss the schism in the ruling faction in light of the decision of some members to run on an independent ticket in the upcoming elections.