Palestinians sift through rubble, leave for day to shop for provisions and check home during pause in fighting.

By REUTERS
JULY 26, 2014 16:59
Palestinians walk past destroyed houses in Beit Hanoun in the northern Gaza Strip July 26, 2014.
(photo credit: REUTERS)
Advertisement
A 12-hour humanitarian truce went into effect on Saturday after Israel and Palestinian terror groups in the Gaza Strip agreed to a UN request for a pause in fighting and efforts proceeded to secure a long-term ceasefire moved ahead.As the truce began, many Palestinian families sheltering at a UN-run school said they would leave for the day, to shop for provisions and check on their homes and families. 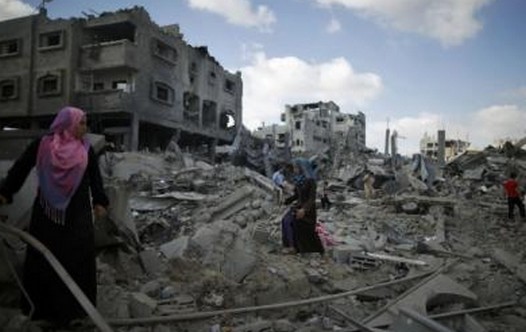 Palestinian medics said 85 bodies had so far been pulled from the rubble on Saturday in border areas of the Gaza Strip, where Israeli forces appeared to have largely withdrawn."When they said there would be a truce for 12 hours we got ready to go back home because if there is a truce, we want to feel free. The Arab nations are all sleeping, sitting and doing nothing-- the kings and heads of state. Shame on them," said Mesbah al-Sultan.More than 140,000 Palestinians have fled amid  fighting between Israel and Gaza terrorists, many of them seeking shelter in buildings run by the UN Relief and Works Agency (UNRWA).Israeli forces are trying to stop terrorists from Hamas and their allies from firing rockets into its territory.Those sheltering at the school said they were living in very difficult circumstances."We are looking for a long-term truce, we do not want to keep waiting for a truce day after day. Here we are in a very, very bad situation. We are homeless and are living here in the schools, our children are very tired. Really, we are living today in a very bad situation," said Alaa Zaied.Hundreds of Palestinians poured into the streets in the minutes after the truce took force, some headed on foot to their homes to inspect damage from the Israeli assaults and many lined up outside banks to withdraw cash and stock up on supplies.But children, the elderly and many women stayed behind in the UN-run school, some saying they had little faith in the cease-fire."What truce is Israel talking about? Israel is lying. It agrees to a truce but after that, what does it do? After we feel safe and proceed to check on our families and friends, to leave our children here, they (Israeli forces) kill you wherever you are," said Lena Ledawe.The IDF said it would hold fire for 12 hours while pressing on with its search for tunnels used by terrorists. A spokesman for the Islamist group Hamas, which dominates Gaza, said all Palestinian factions would abide by the brief truce.