Google Maps users will soon be able to explore the cities of Ramallah, Bethlehem and Jericho from their smartphones. 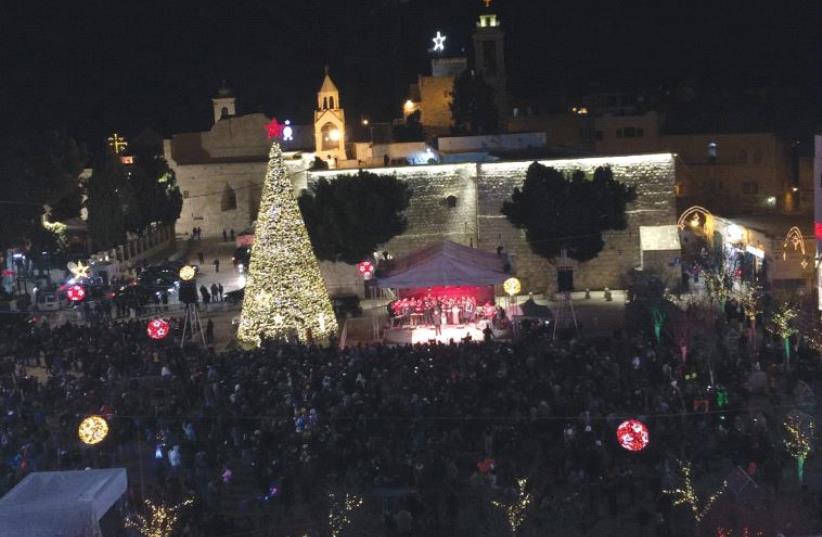 MANGER SQUARE in Bethlehem sparkles last night with the celebration of Christmas Eve.
(photo credit: ADAM RASGON)
Advertisement
The world will soon be able to explore the streets of Ramallah, Bethlehem and Jericho up close on Google Maps.The Google street car, with its multiple high-resolution cameras, took to the streets of the de facto Palestinian political capital on Sunday to take 360 photos of most of the city’s streets and thoroughfares, PA Deputy Telecommunications Minister Suleiman Zuhairi said on Monday.“Anyone will be able to take a tour of the three cities that are participating in the pilot program,” Zuhairi told The Jerusalem Post.Shortly after the Google street car completes its rounds taking photos in the three West Bank cities, the company will enable the street-view service on Google Maps.Google and the PA Telecommunications Ministry have been in contact for several years, and they reached an agreement in 2015 to bring the Google street car to the Palestinian territories.Zuhairi said that he believes enabling Internet users to explore Palestinian cities online will entice tourists to come visit the West Bank’s cities. “Anyone will be able to visit the popular sites and places in these cities [virtually],” Zuhairi said.This week, the Google street car will be taking photos in Ramallah, before moving on to Jericho and Bethlehem next week.According to Safa al-Dweik, director of Geographic Information Systems for the Ramallah Municipality, Google will be holding a launch event in Ramallah for the new service in March.Zuhairi added that he believes Google will send its street car to the rest of the cities in the West Bank, and possibly the Gaza Strip, if the pilot program goes smoothly.Majdi Habash, 24, of Ramallah, said the street-view service may serve to undercut stereotypes of Palestinians.“It should be helpful for people abroad to see what Palestine actually looks like, especially those who think this place is backwards and all about conflict and violence,” said Habash, who works at a local advertising agency.“People will realize that we don’t ride camels to work.”Habash added that he thinks the street-view service will not be particularly useful to him on a daily basis, but it could help him decide where else to travel in the West Bank.“I already know most of the places in Ramallah, but I think it could help me look up places to go in Jericho or Bethlehem,” Habash said.The street-view service comes at a time when Palestinians are trying to update their technological infrastructure.In 2016, Ramallah became the first Palestinian city to provide Wi-Fi in a number of public spaces.Additionally, the PA Telecommunications Ministry signed an agreement with Israel to provide Palestinians with 3G services in 2015, but negotiations over its implementation have delayed the launch of the service.