Relentless airstrikes coordinated by Hadi's Saudi allies will not be enough to turn the tide against the Houthis. 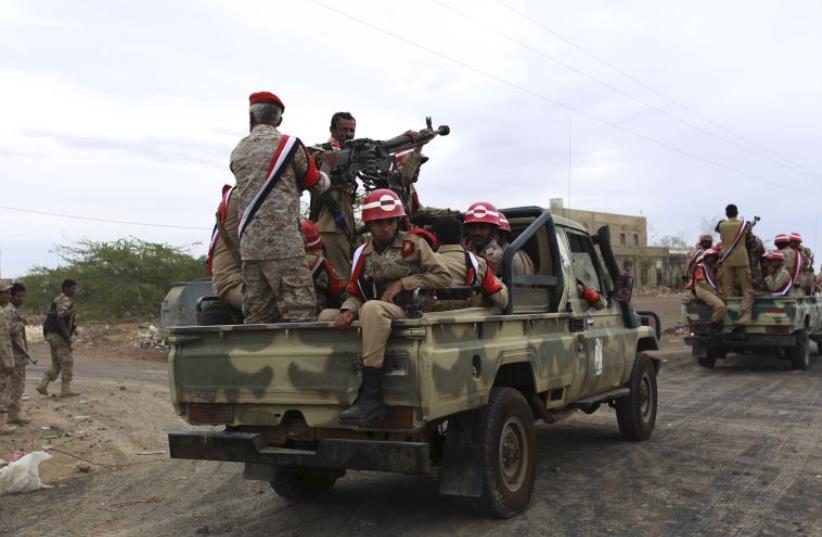 Soldiers loyal to Yemen's President Abd-Rabbu Mansour Hadi ride at the back of a pick-up truck during a parade in Yemen's northern province of Marib
(photo credit: REUTERS)
Advertisement
ADEN/DUBAI - Crawling under barbed wire and leaping over burning tires, dozens of bare-chested young fighters train in a barren part of central Yemen, preparing to head to the frontlines of their country's worsening conflict.Less than 100 miles (150 km) away in Aden, former army officers are readying a separate contingent of volunteers to join a war that has put the energy-rich Gulf on edge.Recruited by different factions, both units are set to fight side by side, joining a push by exiled President Abd-Rabbu Mansour Hadi to create a ground force capable of regaining power from dominant Houthi fighters, who are backed by Iran.The intensive training, recorded on a video posted on Facebook, is recognition that relentless airstrikes coordinated by Hadi's Saudi allies will not be enough to turn the tide against the Houthis, who have taken over much of Yemen in the past nine months and sent the president fleeing."This is the first time I take up weapons and go to battle," said Abdullah al-Sallal, a 25-year-old unemployed lawyer who has joined a unit that has sworn allegiance to Hadi."We are fighting against the injustice and aggression committed by the Houthis," he added, while on a visit to his family in Sheikh Othman district north of Aden.Hadi's project faces formidable obstacles.For one, he is outgunned on the ground: The Houthis' allies are Yemen's most organized forces -- army units equipped with heavy armor and loyal to former President Ali Abdullah Saleh who have withstood more than 11 weeks of intense air assaults.Then there is the risk Hadi's fighters could one day collide with, or be infiltrated by, other groups seeking to exploit Yemen's chaos, including al-Qaida, and thus complicate future attempts to stabilize the country.Additionally, Hadi's forces are allied to secessionists, like the men training in central Yemen, who call themselves the "Southern Resistance". Opposition to the Houthis seems to be the only thing they have in common, with Hadi rejecting any calls for the south of the country to break away from the north.Yet another potential complication is that Hadi would like his powerful Saudi Arabian allies to establish a safe zone on the coast near Seihut town, some 300 km from the Omani border, where he can base his nascent army, a diplomat said.But there is no sign that Riyadh backs the safe zone idea as it ponders its next steps following weeks of inconclusive warfare and sees whether U.N.-sponsored peace talks make progress in Geneva.

FIRST BRIGADEHadi's fighters nonetheless declare morale is strong.Though still small in number and with no unified command, the newly-trained fighters have managed to help stop Houthi advances on some areas around Aden, and even recaptured the city of Dhalea last month from Houthi forces who had seized it.And this week, Hadi's force and the Southern Resistance checked a Houthi offensive in Aden's Bir Ahmed district, residents and sources on the battlefront said.Backed by Saudi funds and logistical support, activists say Hadi loyalists have already put together one brigade comprising between 4,000-5,000 soldiers in Aden, while other loyalists operate in the oil-producing Marib, Hadramout and Shabwa provinces."There are military commanders who are ready to participate in rebuilding a national army," said Mohsen Khasroof, a retired Yemeni army general. "Right now, they may be working as popular resistance, but they will come under one command," he added, speaking from Egypt where he lives.Next week's peace talks have not slowed Hadi's recruitment drive: He is acutely aware of the importance of wielding armed clout in Yemen's volatile politics.Hadi was stunned by the refusal of key army units to defend him when the Houthis seized Sanaa in September.Too late, he realized much of the army had stayed loyal to Saleh, the former strongman who had handed over power to him in 2012 in a Gulf Arab brokered accord after Arab Spring protests.Rather than vanish into obscurity, Saleh quietly forged an alliance with the Houthis in a bid to settle scores with various political foes, including his successor.With only a rag-tag militia recruited mostly from unemployed and largely uneducated Yemenis, Hadi had no chance against the Houthis, a long marginalized group from the north that said it was fighting graft and claiming a stake in national politics.So, having fled to neighboring Saudi Arabia, he began creating a serious ground force of his own.AIR DROPSIn one of his first moves, Hadi despatched his new chief-of-staff, General Mohammed Ali al-Maqdeshi, to rally troops in Hadramout province and promise them better pay and equipment."General Maqdeshi's mission was to set up the nucleus of the new Yemeni army starting with the military units loyal to the legitimate government," a military source said.Hadi's generals have since embarked on a recruitment drive, calling on ex-officers of the former South Yemen army who had been laid off by Saleh when his northern forces won a 1994 civil war against the south to do the training.Recruits receive about $100 a month -- valuable income in a country where jobs are scarce -- and have light weapons provided by air drops from Saudi-led forces. They also have some tanks captured from the Houthis or seized from army depots.Saudi-led forces say they give Hadis' supporters logistical support. "But they do not need outside help to train. Yemen has plenty of instructors to do the work," General Ahmed al-Asseri, spokesman for the Saudi-led alliance, told Reuters.For its part, the Southern Resistance, stands 'side by side' with the Saudi-led alliance, according to Aydarous al-Zubaydi, a former army officer who leads Southern Resistance in Dhalea.But some say the chaos of war, combined with Hadi's lack of a substantial power base, means recruitment may not be properly supervised. That in turn might provide opportunities for al Qaeda's substantial Yemen wing or southern secessionists to infiltrate the fledgling force."With southern Yemeni officers being called back ... the question of the possibility that this could play into southern secessionists demands," said Theodore Karasik, an independent analyst based in the United Arab Emirates. "So there is a question of how much control would Hadi have over these forces."