Ex-Obama aides: US should give Israel bunker-buster bombs to prevent Iran from getting nukes

Dennis Ross, the former peace envoy, and David Petraeus, ex-CIA director, penned an op-ed for 'The Washington Post' on Wednesday. 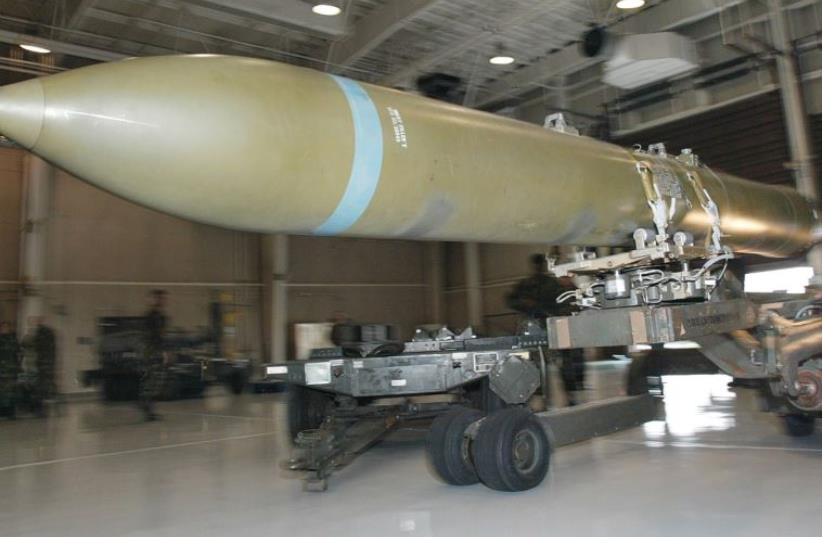 A 5000-pound class bomb "Bunker Buster" GBU-37
(photo credit: REUTERS)
Advertisement
The Iran nuclear deal would be far more effective if the United States provided Israel with weapons capable of destroying the Islamic Republic's atomic facilities, two former high-level US officials wrote in an op-ed for The Washington Post on Wednesday.Dennis Ross, the former peace envoy and adviser on Middle East issues to a number of presidential administrations, and David Petraeus, the erstwhile Central Intelligence Agency director and former commander of US forces in Iraq and Afghanistan, argued in an op-ed that Washington needs to make clear that it will use force against Iran if it breaches "the nuclear threshold firewall" after year 15 of the Joint Comprehensive Plan of Action."Now is the time to make it clear that there will be a firewall between Iran’s threshold status and its having a nuclear weapon," the two men wrote. "Now is the time for the Iranians and the world to know that if Iran dashes toward a weapon, especially after year 15, that it will trigger the use of force. At that point, it would be too late for sanctions to preempt an Iranian nuclear fait accompli."Earlier this year, The Wall Street Journal reported that the Pentagon upgraded the biggest bunker-buster bomb in its arsenal even as talks continued over Tehran's nuclear program, readying a weapon that could destroy Iran's facilities if negotiations failed.Work to improve the design, guidance systems and anti-jamming capabilities on the so-called Massive Ordnance Penetrator began before the conclusion of negotiations with Iran.The most recent test of the 30,000-pound device was in mid-January, the Journal said.The bomb was created to give US President Barack Obama options for attacking fortified facilities like Iran's Fordow nuclear installation, which is built into a mountain.This past April, US Secretary of Defense Ashton Carter addressed the possibility of a military option against Iran, saying that bunker busting bombs, meant to penetrate Iran's underground facilities, are "ready to go."Speaking to CNN, Carter said that the deal between Iran and the P5+1 hinges not on "trust" but rather on "verification.""We have the capability to shut down, set back and destroy the Iranian nuclear program and I believe the Iranians know that and understand that," Carter said, indicating the US's willingness to utilize high-powered bombs if Tehran does not abide by the deal. The reference to the Massive Ordinance Penetrator, or MOPS, whose reach extends 200 feet below ground, was the first that any American figure had made concerning substantive military planning against the Islamic Republic's fortified subterranean facilities.In their op-ed, Ross and Petraeus argue that the administration should commit to providing Israel with the upgraded, advanced version of the bomb rather than the 4,400-pound ordnance that the president pledged to provide in his letter to Rep. Jerrold Nadler (D-NY). Nadler eventually decided to support the Iran deal despite significant pressure from a solid bloc of his New York constituency."While some may question whether we would act militarily if the Iranians were to dash to a bomb, no one questions whether the Israelis would do so," Ross and Petraeus wrote.