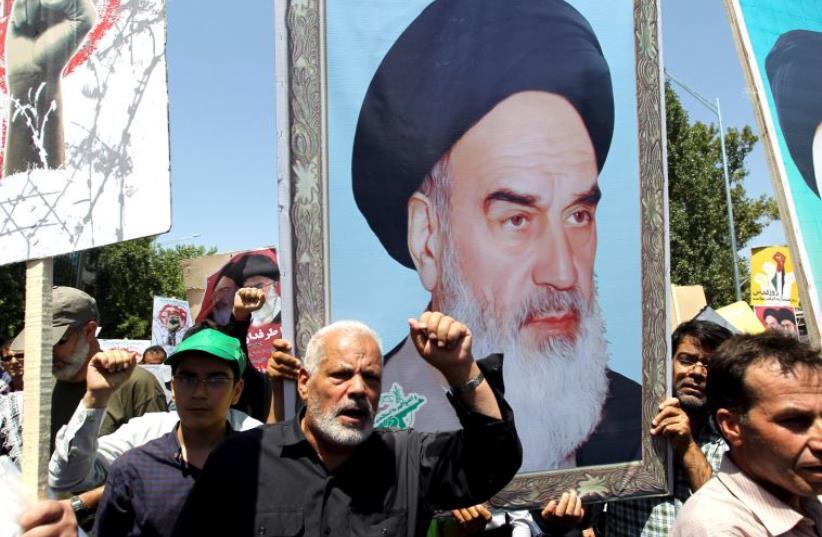 Demonstrators shout slogans in front of a poster depicting Iran's late leader Ayatollah Khomeini during a rally in Tehran
(photo credit: REUTERS)
Advertisement
Iran and its allies must do all in their power to curb American influence in the Middle East, a top adviser to Supreme Leader Ayatollah Ali Khamenei said.According to official Iranian media, Ali Akbar Velayati said that the "resistance axis" of Iran, Iraq, Syria, Lebanon, and the Palestinian territories is "not only to fight against the dominance of foreigners in their countries" but also to roll back US hegemony.Velayati said that the Western powers are conspiring to divide Syria after "failing in its military aggression against Afghanistan and Iraq."“Syria is the golden ring of resistance against the Zionists,” he said.Despite the nuclear deal recently struck with the major powers, Iranian officials have continued to make statements that appear to give the impression that the regime is still intent on assuming a hostile posture toward the West.Just days after the agreement was struck, Khamenei tweeted a warning against any military action against Iran by what he called the "aggressive and criminal US."Appearing on Ayatollah Khamenei's official Twitter account, the social media post features a quote from the Islamic Republic's premier cleric reading "we welcome no war, nor do we initiate any war, but if any war happens he who will emerge the loser will be the aggressive and criminal US."Below the threat, a silhouette resembling US President Barack Obama can be seen holding a gun against his own head, as if to suggest that any sort of strike against Tehran would be a suicidal move for the American leader. Last week, Foreign Minister Mohammad Javad Zarif told reporters in Beirut that the Islamic Republic's major challenge in the region is in "confronting...the Zionist and extremist regime."Zarif arrived on an official visit to the Lebanese capital on Tuesday to discuss bilateral and regional issues, including a "new plan" on how to resolve the crisis in neighboring Syria, according to an Iranian foreign ministry spokeswoman. Tehran's top diplomat also met with Hezbollah chief Hassan Nasrallah.