"He has distorted the Iranians' pre-Islam historical era and attempted to misrepresent events," Iran's parliament speaker says of PM. 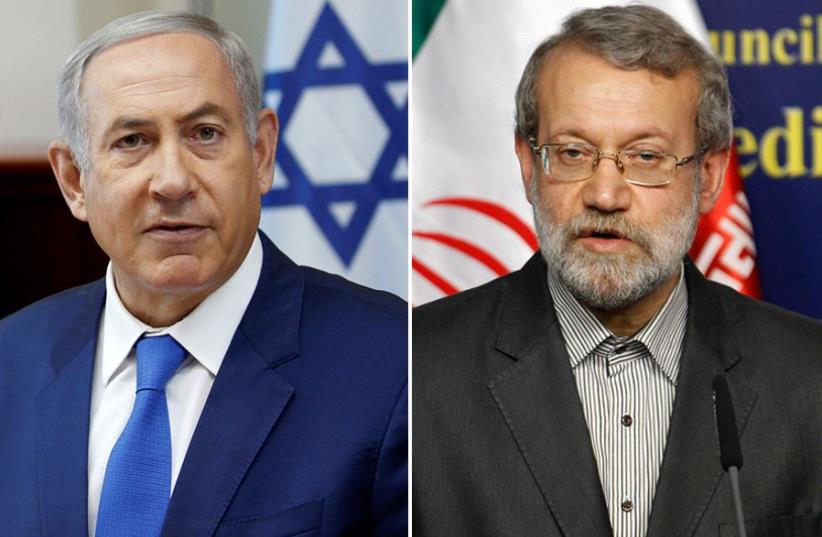 Netanyahu and Larijani ‏
(photo credit: REUTERS)
Advertisement
Iran's parliament speaker on Sunday condemned a parallel Prime Minister Benjamin Netanyahu has made between present-day Iran and the plot to annihilate the Jews in ancient Persia as marked this weekend during the Jewish holiday of Purim.In his dismissal of the comparison Netanyahu made last week during a meeting with Russian President Vladimir Putin, Iran's Ali Larijani advised the Israeli premier study the Hebrew bible. "He has distorted the Iranians' pre-Islam historical era and attempted to misrepresent events," Iranian Fars News Agency quoted Larijani as saying of Netanyahu. "Apparently, he neither is familiar with the history nor has studied the Torah." "Of course, nothing more than presenting such lies is expected from a wicked Zionist," he added in a parliamentary address in Tehran.
Netanyahu meets Putin in Moscow (credit: REUTERS)
Larijani remarks came in reference to comments Netanyahu made during a meeting Thursday with Putin in Moscow about Iranian activities in the region. In his third visit to Russia in the last 11 months - a testament to Moscow’s influence in the region as a result of its intense engagement in Syria - Netanyahu used a Purim greeting by Putin as a peg to blast Tehran.“I thank you for your good wishes on Purim,” the prime minister said. “Some 2,500 years ago in ancient Persia, there was an attempt to wipe out the Jews, which did not succeed, and which we commemorate with this holiday.”Today, Netanyahu said, Iran – the heir of the Persians – has similar designs: to wipe out the Jewish state. “They say this clearly, and it is etched on their ballistic missiles,” he said.While convening with Putin, Netanyahu focused on Iran's involvement in the Syrian civil war, warning of the Islamic Republic and its proxies establishing a "permanent presence" in Syria, which shares a border with northern Israel's Golan region. According to Iranian media on Sunday, the country's parliament speaker Larijani claimed that the prime minister's remarks demonstrate Israel "is behind the war in Syria.”"He has set preconditions for peace in Syria and stated clearly that the war in Syria has targeted the anti-Zionism resistance," Larijani charged.Herb Keinon contributed to this report.