“Deciding who is a terrorist is highly politicized...The US and other Western countries consider Saudi Arabia a ‘moderate’ Muslim country because it gives us a way to work with them.” 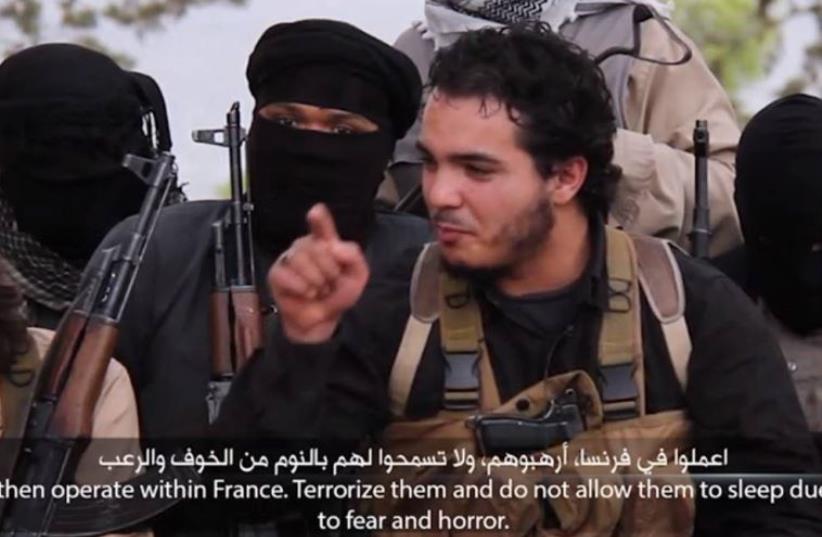 ISIS video calls on Muslims to carry out attacks in France
(photo credit: ISLAMIC SOCIAL MEDIA)
Advertisement
Islamic State has scrambled the chart on how one delineates a terrorist group and which Islamist groups should be shunned.Islamic State’s behavior, which is more ruthless and violent than all other Islamist groups, has made even al-Qaida or its Syrian branch, the Nusra Front, appear “moderate” to some governments.For example, Saudi Arabia invited Islamist groups Ahrar al-Sham and Islam Army, which have links to al-Qaida, to Riyadh this week along with other opposition groups in order to form a united front. Ahrar al-Sham fights in cooperation with Nusra Front.According to a report in Foreign Policy over the weekend by Colum Lynch and John Hudson, the US has not designated Ahrar al-Sham a terrorist organization and is open to its participation in a political settlement in Syria.“The Americans say anyone who signs on to a cease-fire can be [left off] the terror list,” an official who is closely involved in the diplomatic process told them.And the non-jihadist international Islamist Muslim Brotherhood movement, which prefers a patient strategy of building up support at the grass roots level through its network of social services and educational institutions, is now viewed by some as “moderate.”This, despite the fact that its final goal of creating a worldwide caliphate do not differ from jihadist groups.The description of Islamic State and al-Qaida as jihadist groups and the Muslim Brotherhood as a non-jihadist group does not mean that the Brotherhood doesn’t believe in jihad, just that its strategy prefers to postpone the use of violence to a later stage.On the other hand, jihadist groups are impatient and launch attacks now, no matter their strength or ability to withstand government retaliation.Some experts believe that naming groups “terrorist” is not easy nor desired and that it often is influenced by politics in any case.Daniel Pipes, historian and president of the Middle East Forum think tank, said: “The rank confusion over defining Islamist groups as ‘terrorist’ or not points to the inutility of this term, which invariably raises sterile and distracting semantic debates.“We care if a group is Nazi, Maoist, or not; likewise, we should focus here on the ideology, which in this case is jihadi Islamist,” Pipes told The Jerusalem Post.“Exactly how to characterize their tactics should be left for graduate seminars to parse.”Asked if Islamic State violence is so shocking that it is distracting people from the dangers of quiet non-jihadist Islamists such as the Muslim Brotherhood, Pipes responded: “I would say the reverse. As someone calling the alarm about the Islamist ideology for two decades and more, I am very happy with the current direction of the debate.”For example, that the female San Bernardino murderer, Tashfeen Malik, “attended Islamic Society of North America classes is being noted,” he said, adding that Republican presidential candidates are talking about radical Islam, not just terrorism.Prof. Lawrence Rubin, a Middle East expert from the Sam Nunn School of International Affairs at the Georgia Institute of Technology, told the Post that instead of seeing the US as dumbing-down the definition of terrorism, “we should see it as creating opportunities to work with unsavory actors that could advance our long-term interest.”“This is especially the case if we have no other options and it doesn’t mean they are allies; it just means our interests are aligned.“Deciding who is a terrorist is highly politicized,” he said, adding that there should be a way to deal with groups that change.“I also think the idea of ‘moderate’ is problematic. The US and other Western countries consider Saudi Arabia a ‘moderate’ Muslim country because it gives us a way to work with them.”First, said Rubin, it is unclear what a “moderate” Muslim is and, second, “many argue that the ideology Saudi Arabia practices at home and exports abroad is inconsistent with many of the values the West upholds.”Robert Wesley, president of the Terrorism Research initiative and founding editor of Perspectives on Terrorism, told the Post that it is difficult to disaggregate the factions in Syria in terms of ideological stance.“Ideology often is a dynamic and modifiable construct for these organizations,” he said.“Take, for example, Al Jama’a al-Islamiya in Egypt. Its ideology and decisions of violence have been subject to environmental pressures and have changed over time.”It may seem neat to planners to have nicely delineated and categorized labels for such groups, but such definitive judgments may in fact be counterproductive, especially in the case of groups who’s ideology may not be as fixed as critics like to pretend.The Syrian civil war has continued for a number of years and “no one’s hands are clean– Assad’s may be the dirtiest of them all,” asserted Wesley.“If Assad’s regime can be seen as a potential partner for peace, then I’m not sure which faction, aside from Islamic State, could be left out of consideration as a party to broker peace.”The process of negotiation and engagement will inevitably wean out those groups who are more comfortable with a future of perpetual conflict than those willing to make concessions, he added.