Timothy Paul Jacobs Wordsworth wants to help rid the world of ISIS
Advertisement
He is a Reform Jew, a follower of hassidic Rebbe Nachman, the grandson of a Holocaust survivor, a former British soldier...and in Syria fighting Islamic State.Timothy Paul Jacobs Wordsworth, speaking to The Jerusalem Post from northern Syria on Monday, said he was inspired to join the Kurdish People’s Protection Units (YPG) in Syria because he was instilled with the desire to do everything he can to help people.In the 1990s, he was a soldier for the British military and served as a NATO peacekeeper in Bosnia and Kosovo. However, his life took a different direction as the horrors of Islamic State continued to mount.“When I heard that there was an opportunity to come and serve with the Kurds and stop genocide, I jumped at the chance to come here,” he said. 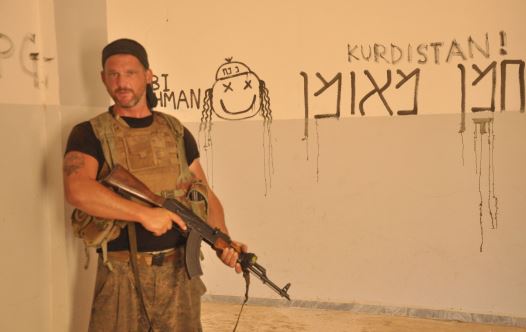 Wordsworth, from England, is the grandson of a Holocaust survivor and grew up in what he described as “a Christian in a Jewish background.” He converted to Judaism several years ago through a Reform synagogue in London and still considers himself still to be a member of the congregation.At the same time he has become increasingly loyal to the hassidic teachings of Rebbe Nachman of Breslov.Wordsworth has been spray-painting a popular hassidic slogan in places that the Kurdish forces recapture, former Islamic State bases and mosques around Syria. Sometimes the slogan appears alongside the Islamic State flag.By spray-painting the slogan “Na Nach Nachma Nachman M’euman” (Nachman of Uman), he said he elevates the place spiritually and feels happier personally.“I fell in love with the Breslov group [when he spent time in Israel],” he said, quoting the 19th-century Ukrainian rabbi’s teaching that “It is a big mitzva to always be happy.“Rebbe Nachman always makes me happy. And in this black place where I’ve seen so many people killed and dead, where I’ve walked among the dead, I’ve moved dead bodies to mass graves... Whenever I write the name of Rebbe Nachman, I feel really that it brings light.”The graffiti, he said, has inspired the others around him, and he recounted how a fellow non-Iraqi soldier fighting alongside the Kurds was so excited upon seeing it that he yelled out “Na Nach!” Wordsworth said that he believes in the concept from the Talmud that there will be two messiahs, though contrary to the Judaism, he believes that Jesus was the messiah that descended from Joseph.He said that the Breslov movement is an integral part of bringing the second messiah, who would be a descendant of King David.“I am waiting for him and the whole world is waiting for him, the Muslim world, the Christian world, the Jewish world, we all want him to come.”He called on Israelis, especially those with military expertise, to volunteer with the Kurdish forces. Kurds and Israelis are very similar, he said, because they both have experienced genocides.Kurds should mimic Israel and agree to give up some of their “promised land,” which for the Kurds encompasses parts of Iraq, Syria, Turkey, Azerbaijan and Iran, Wordsworth said. 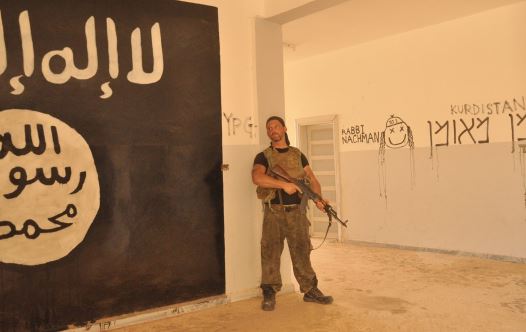 "Many of my friends died to liberate Syrian Kurdistan," he said. "Please learn from the modern State of Israel that you may not be able to have the whole of the pie but at least you'll have your beautiful, living country like the State of Israel."He worries that the Kurds' "dreams may come crashing down" if they continue to insist on reclaiming all land promised to them, continuing to cause conflict with the Turkish and Iranian militaries. "The promised land of Israel was a massive land. It contained the whole north of Jordan, it contained most of Lebanon, but to get along with the neighbors, the modern State of Israel was willing to accept just a narrow strip of land."Wordsworth dreams of making aliyah after he finishes serving with the Kurds so he can have a bit of peace in his life following the fighting in Syria. For him, he said, becoming an Israeli citizen would be a "tikkun" or a rectification, to his family that perished in the Holocaust, which include great-grandparents who were killed in the Auschwitz and Theresienstadt concentration camps."Just as the name of Rebbe Nachman brings light, it would bring me such a light to know that my family who died in the Holocaust [didn't die] in vain," he said. "It's something I need to do."