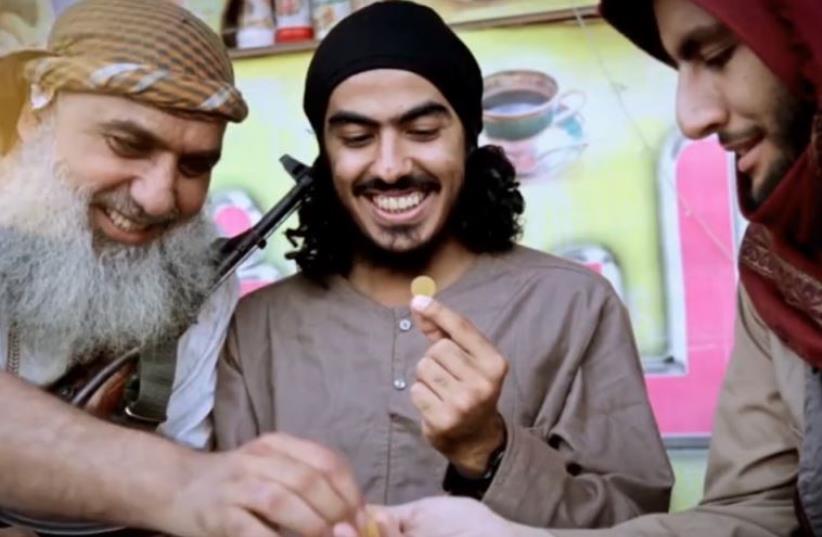 ISIS releases new video in honor of their newly minted currency‏
(photo credit: screenshot)
Advertisement
Omar Hussain, a 27-year-old British Jihadist, wrote a blog post under the name Abu Saeed al Britani complaining that his ISIS comrades are rude and have no etiquette, according to reports by the Telegraph earlier this week. In a long-winded rant, Hussain bemoaned his fellow Jihadists' inability to stand in a proper line, respect his personal space, and their lack of table manners.  “You could be waiting in line for half an hour and then another Arab would come and push in the queue and go straight in,” the Telegraph quoted him as saying. Their poor driving skills and strange inclination towards staring at people also came under fire. Children who stare don't bother him but Hassan said, “it can be quite uncomfortable to have a fully grown man stand a few meters away from you staring at you." According to Hussain, Jihadi table manners leave much to be desired. “The difference between an Arab and a non-Arab in their manners are like the difference between the heavens and the earth," he said.Hussain recalled an incident  in which he refused to serve his comrades their food until they were all sitting properly at the table.  “Unfortunately I had to treat them like primary school students," the report quoted him as saying.  This is not his first time using the Internet as a platform to release his frustrations, according to the Telegraph. Earlier this year Hussain complained that his dating life has been difficult as he has been unable to find himself a Jihadi bride and, on top of that, he has been forced to peel potatoes without a proper peeler. Hussain concluded his rant stating, "I would strongly advise my Western brothers to join a non-Arab battalion if the above traits are something one cannot live with."